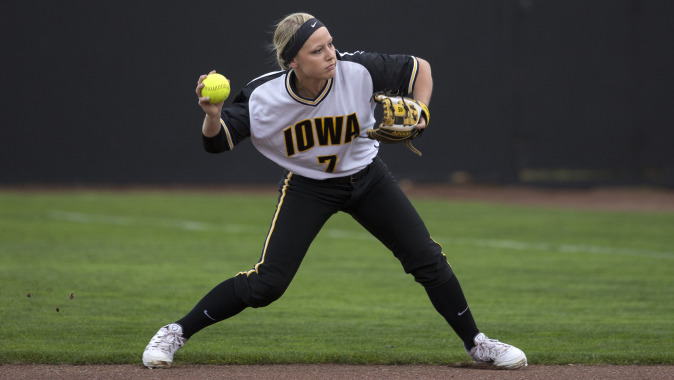 THIS WEEK
The University of Iowa softball team travels to Rosemont, Illinois, for the Total Control Sports Invitational hosted by UIC and Loyola this weekend. The Hawkeyes open the weekend with an 11:30 a.m. (CT) contest against IUPUI on Friday before taking on UIC at 4:30 p.m. Iowa will face Lipscomb at 11:30 a.m. and Loyola at 2 p.m. on Saturday, before concluding the weekend with an 11:30 a.m. contest against Indiana State on Sunday.

THE SETTING
The Total Control Sports Invitational will be held at The Dome at Rosemont. The Hawkeyes will compete at an indoor tournament for the second time in as many seasons. Iowa went 3-2 at the UNI Dome Tournament in 2015.

IN THE RANKINGS – B1G
Three Big Ten teams appear in the USA Today/NFCA Division I Softball Coaches Poll released on Feb. 16. No. 2 Michigan and No. 20 Minnesota are ranked within the top 25, while Nebraska is receiving votes in the poll.

TAKING ON THE BEST
•Seven of Iowa’s 2016 opponents are coming off a 2015 NCAA Tournament appearance.
•Iowa is scheduled to play 15 games against those opponents this season.
•The team’s include: Louisville, Texas, Nebraska, Northwestern, Missouri, Indiana State, and Minnesota.

HAWKEYE DEBUTS
Four student-athletes made their Hawkeye debuts at the Texas A&M-Corpus Christi Tournament from Feb. 12-14. Sophomore Katy Taylor started all five games (four at SS, 1 at DP). Junior Elizabeth Wiegand and freshmen Mallory Kilian and Erin Riding all made their debuts in the circle on opening weekend.

A PAIR OF SHUTOUTS
•Freshmen Mallory Kilian and junior Elizabeth Wiegand each threw a complete-game shutout in the circle on opening weekend.
•Wiegand allowed just three hits in Iowa’s 1-0 win against Louisville on Feb. 12. The junior transfer walked one and struck out five in seven innings.
•Kilian held Sam Houston State to just two hits in Iowa’s 8-0 run-rule victory over Sam Houston State on Feb. 13. The freshman allowed just two hits and a walk in six scoreless innings. She struck out four.

2-3-4 PRODUCTION
Six of Iowa’s seven hits against Sam Houston State on Feb. 12 came from its two-three-four hitters. Juniors Kaitlyn Mullarkey and Claire Fritsch and redshirt junior Sammi Gyerman went a combined 6-for-9 with two hits apiece in Iowa’s 8-0 run-rule victory over the Bearkats.

EARLY SUCCESS FOR FRITSCH
Sophomore Claire Fritsch leads the Hawkeyes at the plate through five games. The Round Rock, Texas, native registered five hits in 13 at bats in her home state. She successfully advanced runners in 7-of-9 chances, and hit a .500 (3-for-6) with runners in scoring position.

EXTRA BASES
Kaitlyn Mullarkey recorded a pair of extra-base hits for the Hawkeyes on opening weekend in Corpus Christi, Texas. The junior went 2-for-3 with a double, triple, walk, and three runs scored against Sam Houston State on Feb. 13. The three runs scored are a new career high.

TEAM FIRST
The Hawkeyes registered four sacrifice hits at the Texas A&M-Corpus Christi Tournament after recording five in all of 2015. Juniors Claire Fritsch and Kaitlyn Mullarkey and sophomores Sarah Kurtz and Daniella Ibarra each registered a sacrifice hit.

ILLINOIS NATIVES
Two Hawkeyes will be playing in their home state this weekend. Sophomore Angela Schmiederer hails from Prospect Heights, Illinois, while junior Kaitlyn Mullarkey is a native of Park Ridge, Illinois.

SCOUTING IUPUI
•IUPUI went 1-4 in opening weekend action.
•The Jaguars fell to Eastern Illinois (6-0, 6-5) and Iowa State (7-0, 7-0) twice before defeating North Dakota (3-1).
•IUPUI gave up 27 runs in their first five games. Pitcher Erica Tharp led the team with a 3.82 ERA.
•Infielder Taylor Chitwood led the Jaguars at the plate with a .375 batting average.
•Friday marks the first meeting between the Hawkeyes and Jaguars.

SCOUTING INDIANA STATE
•Indiana State will open its 2016 season this weekend after going 27-31 in 2015.
•The Sycamores are coming off their first ever NCAA Regional appearance.
•Taylor Lockwood led the Sycamores in the circle in 2015, registering 18 wins with a 3.19 ERA.
•Iowa holds a 4-0 advantage in the all-time series. The team’s last met on March 2, 2003. The Hawkeyes won 11-0 in five innings.

NEWCOMERS
•Junior transfer Elizabeth Wiegand joins the team after spending two seasons with UT Martin. Wiegand appeared in 26 games with 21 starts for the Skyhawks in 2015. She led UT Martin in ERA (2.94), wins (12), appearances (26), starts (21), complete games (16), shutouts (3), innings pitched (135.2), and strikeouts (63) as a sophomore.
•Sophomore transfer Katy Taylor joins the Hawkeyes after spending a season at Labette Community College. Taylor helped the Cardinals to a 38-16 overall record and a Region VI Championship. She led the nation in stolen bases (89) and paced the Cardinals in hits (76), doubles (10), triples (3), walks (21), batting average (.435), and on base percentage (.485).
•Freshmen Erin Riding (pitcher), Mallory Kilian (pitcher/utility), and Brooke Rozier (catcher/utility) will all make their Hawkeye debut in 2016.