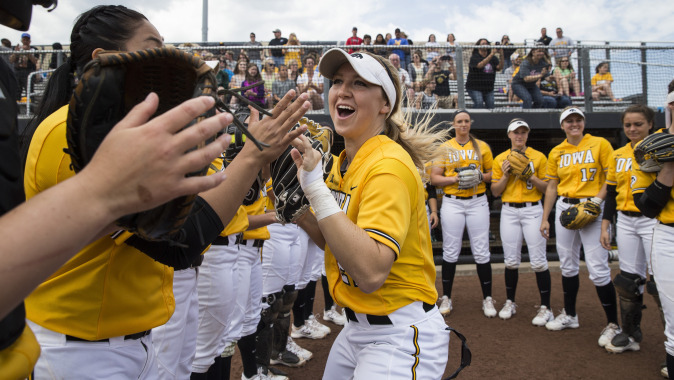 THIS WEEK
The University of Iowa softball team travels to Conway, South Carolina, for the Coastal Carolina Invitational this weekend. The Hawkeyes open the weekend with a double header against Georgia Southern on Friday at 12 p.m. (CT) and 2 p.m. On Saturday, Iowa will face the host Chanticleers at 10 a.m. (CT), before rounding out a three-game series with the Eagles at 3 p.m. The Hawkeyes conclude weekend action with a 9 a.m. (CT) contest against Coastal Carolina on Sunday.

IN THE RANKINGS – B1G
Four Big Ten teams appear in the ESPN.com/USA Softball Division I Softball Collegiate Top 25 poll released on Feb. 23. No. 2 Michigan and No. 22 Minnesota are ranked within the top 25, while Nebraska (13) and Ohio State (1) are receiving votes in the poll.

INCREASED SPEED
After stealing 18 bags in all of 2015, the Hawkeyes have stolen 15 bags in the first two tournaments of the season. The Hawkeyes swiped nine bags at the Texas A&M-Corpus Christi Tournament from Feb. 12-14, and stole six more at the Total Control Sports Invitational on Feb. 19-21. Sophomore Katy Taylor leads the team with five stole bases, while junior Claire Fritsch has three.

KILIAN AT THE DISH
Freshman Mallory Kilian led the Hawkeyes at the plate at the Total Control Sports Invitational from Feb. 19-21. Kilian hit a blistering .667 on the weekend. The Fort Dodge, Iowa, native collected four hits in six at bats. Kilian reached base in all three plate appearances against UIC on Feb. 19. She registered a pair of singles, a walk, and scored a run.

CAREER DAY FOR MISEL
Kara Misel made her first two career starts at third base against Loyola-Chicago (Feb. 20) and Indiana State (Feb. 21). The junior reached base all three times against Indiana State, registering a pair of singles and a walk. The Solon, Iowa, native also scored a run in the contest.

AMONG THE BIG TEN
•Junior Kaitlyn Mullarkey leads the Big Ten in total plate appearances with 38.
•Sophomore Katy Taylor ranks fourth in the conference with five stolen bases.
•Mullarkey and redshirt senior Holly Hoffman are tied for first in the Big Ten with a perfect 1.000 fielding percentage.
•Mullarkey also ranks seventh in putouts (59).

AT THE PLATE
Five Hawkeyes hit .300 or better at the Total Control Sports Invitational in Rosemont, Illinois, from Feb. 19-21. Freshman Mallory Kilian paced the Hawkeyes with a .667 average, while juior Kara Misel hit .500. Redshirt junior Sammi Gyerman (.353), junior Kaitlyn Mullarkey (.333), and senior Erin Erickson (.333) all hit above .300 on the weekend.

TAYLOR SHOWS SPEED
Katy Taylor is a perfect 5-for-5 in stolen bases this season. The sophomore transfer has stole two bases in one game two times this season (Texas A&M-Corpus Christi on Feb. 14 and Lipscomb on Feb. 20). The Owasso, Oklahoma, native has registered nine hits on the season. Six of her nine hits are infield singles.

SCOUTING COASTAL CAROLINA
•Tournament host Coastal Carolina is 4-7 on the season.
•Taty Forbes currently leads the Chanticleers at the plate with a .525 average. The freshman has 21 hits in 40 at bats.
•Kelsey Dominik leads the Chanticleers in appearances (8) and ERA (3.08). The senior owns a 3-5 record on the season.
•Saturday will mark the first meeting between Iowa and Coastal Carolina.

FRITSCH SHINES IN HOME STATE
Sophomore Claire Fritsch led the Hawkeyes at the plate at the Texas A&M-Corpus Christi Tournament on Feb. 12-14. The Round Rock, Texas, native registered five hits in 13 at bats in her home state. She successfully advanced runners in 7-of-9 chances, and hit a .500 (3-for-6) with runners in scoring position.

TEAM FIRST
The Hawkeyes registered four sacrifice hits at the Texas A&M-Corpus Christi Tournament after recording five in all of 2015. Juniors Claire Fritsch and Kaitlyn Mullarkey and sophomores Sarah Kurtz and Daniella Ibarra each registered a sacrifice hit.

A PAIR OF SHUTOUTS
•Freshmen Mallory Kilian and junior Elizabeth Wiegand each threw a complete-game shutout in the circle on opening weekend.
•Wiegand allowed just three hits in Iowa’s 1-0 win against Louisville on Feb. 12. The junior transfer walked one and struck out five in seven innings.
•Kilian held Sam Houston State to just two hits in Iowa’s 8-0 run-rule victory over Sam Houston State on Feb. 13. The freshman allowed just two hits and a walk in six scoreless innings. She struck out four.

HAWKEYE DEBUTS
Four student-athletes made their Hawkeye debuts at the Texas A&M-Corpus Christi Tournament from Feb. 12-14. Sophomore Katy Taylor started all five games (four at SS, 1 at DP). Junior Elizabeth Wiegand and freshmen Mallory Kilian and Erin Riding all made their debuts in the circle on opening weekend.

NEWCOMERS
•Junior transfer Elizabeth Wiegand joins the team after spending two seasons with UT Martin. Wiegand appeared in 26 games with 21 starts for the Skyhawks in 2015. She led UT Martin in ERA (2.94), wins (12), appearances (26), starts (21), complete games (16), shutouts (3), innings pitched (135.2), and strikeouts (63) as a sophomore.
•Sophomore transfer Katy Taylor joins the Hawkeyes after spending a season at Labette Community College. Taylor helped the Cardinals to a 38-16 overall record and a Region VI Championship. She led the nation in stolen bases (89) and paced the Cardinals in hits (76), doubles (10), triples (3), walks (21), batting average (.435), and on base percentage (.485).
•Freshmen Erin Riding (pitcher), Mallory Kilian (pitcher/utility), and Brooke Rozier (catcher/utility) will all make their Hawkeye debut in 2016.