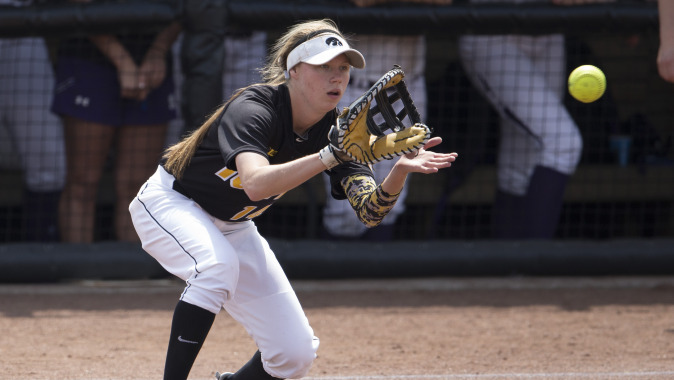 CONWAY, S.C. — The University of Iowa softball team split a pair of games with Georgia Southern on Friday afternoon in Coastal Carolina Invitational action. The Hawkeyes (4-8) defeated the Eagles, 11-0, in five innings in the first game, before falling, 7-4, in game two.

The Iowa bats were hot in game one. Ten different Hawkeyes reached base, while eight student-athletes registered hits.

“It started with Claire (Fritsch) and everyone followed from there,” said UI head coach Marla Looper. “They were doing their job and giving us opportunities. Once we got going, [Georgia Southern] had to make pitching changes, but we continued to be the aggressor when the changes were made. That’s what good ball clubs do, and that’s what we need to be doing all the time.”

The Hawkeyes got the bats going early, plating three runs in the top of the first inning. Junior Claire Fritsch led it off with a walk and a stolen base. Redshirt junior Sammi Gyerman followed with a walk of her own to put runners on first and second for Angela Schmiederer. The sophomore took advantage of the RBI opportunity with a two-run double down the left field line. Freshman Mallory Kilian followed with an RBI single to right to give Iowa a 3-0 lead.

Iowa added a run in the second, third, and fourth. Fritsch scored on a Schmiederer single up the middle in the top of the second — her second hit and third RBI of the day.

A leadoff walk by sophomore Allie Wood, a pair of infield singles off the bats of senior Whitney Repole and sophomore Katy Taylor, and an error by the Eagle first baseman plated a run in the third.

Junior Kaitlyn Mullarkey led off the fourth inning with a single to right and moved to second on a stolen base. With runners on first and second and two outs, sophomore Ashley Yoways sent a pinch-hit RBI single to left extend the Iowa lead to 6-0.

Iowa sent 11 batters to the plate in a five-run fifth inning. Senior Erin Erickson started the inning with a walk before Taylor sent a single to left. One batter later, Mullarkey sent a three-run home run — her third blast of the season — over the center field wall to give the Hawkeyes a 9-0 lead.

Gyerman continued the rally with a double up the middle, and back-to-back walks and a wild pitch allowed her to score. Yoways reloaded the bases after a hit by pitch, before Erickson secured the 11-0 win with an RBI walk.

Elizabeth Wiegand notched the complete-game shutout in the circle. The junior did not allow a run on four hits and two walks. She struck out two.

The Hawkeyes got the bats going early in game two, plating three runs in the top of the first inning. Fritsch led off the game with a walk before Mullarkey sent a single to left. Schmiederer got hit by a pitch to load the bases, and Kilian capitalized on the RBI opportunity with a two-run double down the left field line. After a walk by Wood, Repole plated a run on a single to the shortstop to give Iowa a 3-0 lead.

Iowa added another run in the second. Fritsch started the inning with a single up the middle. Mullarkey followed with a double down the right field line. With runners on second and third and no outs, Gyerman plated Iowa’s final run of the game with a sacrifice fly to left.

The Eagles added a run in the third and fourth before knotting the game at four in the bottom of the fourth.

Defensive miscues proved to be an issue for the Hawkeyes late as the Eagles scored four unearned runs in the final two innings. Georgia Southern used a walk, error, and a solo home run to tie the game, 4-4. The Eagles scored three more in the bottom of the sixth on a pair of singles, a walk, and an error to complete the 7-4 come-from-behind win.

“Overall, it comes down to taking care of the ball,” said Looper. “It seems so simple. After the first two innings we kind of settled. We continued to get hits and put runners on base, but we didn’t score them.

“Defensively, the wheels fell off in the fourth inning. We didn’t stay in control of the game. We have to do a better job taking care of the ball. Unfortunately, not taking care of it put us in a hole at the end.”

The Hawkeyes return to action tomorrow with a 10 a.m. (CT) contest against tournament host Coastal Carolina and a 2 p.m. game against Georgia Southern.