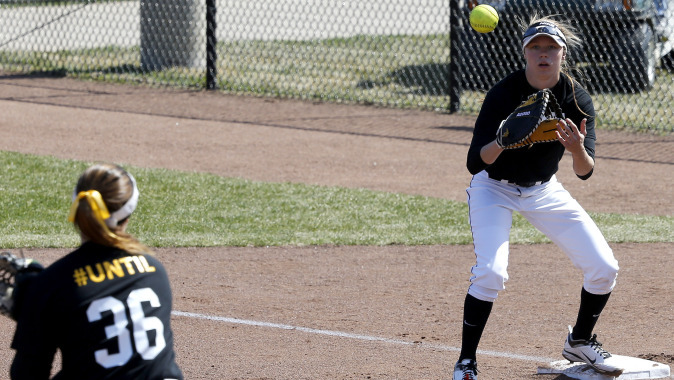 CONWAY, S.C. — The University of Iowa softball team scored three runs in the final three innings, but fell, 6-5, to Coastal Carolina on Sunday morning. The loss drops the Hawkeyes to 4-11 on the season, while the Chanticleers improve to 7-7.

Coastal Carolina came right back in the bottom of first. The Chanticleers plated two runs on a single and a home run to right to tie the game, 2-2.

The Chanticleers put up three more runs in the bottom of the third (four hits and a walk) and another in the fourth (two singles and two walks) to take a 6-2 lead.

Iowa rallied in the fifth, plating a pair of runs. Junior Claire Fritsch reached on a fielder’s choice with two outs, before Mullarkey sent an RBI double off the top of the center field wall. Senior Holly Hoffman followed with an RBI single to right to pull the Hawkeyes within two, 6-4.

Katy Taylor started an Iowa rally in the seventh with an infield single. With two outs, Mullarkey sent a double up the middle — her second double of the game — that scored Taylor from first and pulled the Hawkeyes within one. Iowa’s comeback effort fell just short; however, as the Chanticleers held on to win the game 6-5.

Shayla Starkenburg (0-2) took the loss in the circle. The redshirt junior allowed five earned runs on six hits and a walk. She struck out seven. Sophomore Ashley Yoways and junior Elizabeth Wiegand also saw time in the circle. Yoways allowed an earned run on three hits and two walks in an inning and 2/3, while Wiegand held the Chanticleers hitless in 1 and 1/3.

Mullarkey led the Hawkeyes at the plate with a 2-for-3 effort. The Park Ridge, Illinois, native registered a career-high two doubles and scored two of Iowa’s five runs.

“We have to believe that we can overcome these one-run losses,” said Looper. “Last weekend we struggled to score runs. This weekend we scored them, but we gave up too many. If we can get all facets of our game together, or even two of the three on any given day, then we are going to get good outcomes.”

Iowa returns to action when it travels to Tulsa, Oklahoma, for the Tulsa Tournament on March 5-6.