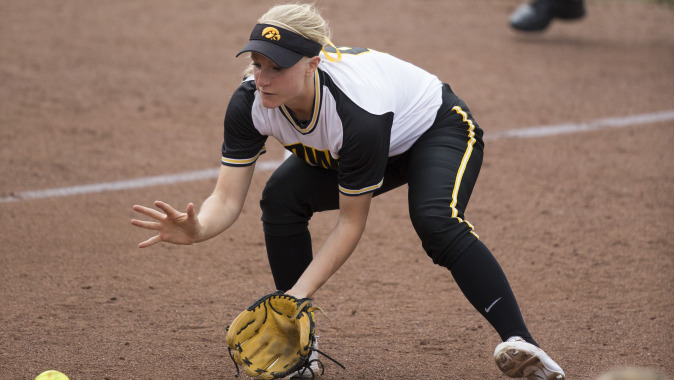 LIVE STREAM
A live stream will be available for both of Iowa’s games against Tulsa. The Hawkeyes and Golden Hurricane square off at 12 p.m. (CT) Saturday, and 10 a.m. on Sunday. Links can be found on the Iowa softball schedule page on hawkeyesports.com.

IN THE RANKINGS – B1G
Four Big Ten teams appear in the ESPN.com/USA Softball Division I Softball Collegiate Top 25 poll released on March 1. No. 3 Michigan and No. 19 Minnesota are ranked within the top 25, while Nebraska (36) and Ohio State (2) are receiving votes in the poll.

BATS COME TO LIFE IN RUN-RULE VICTORY
The Hawkeyes scored a season-high 11 runs en route to an 11-0 run-run victory over Georgia Southern on Feb. 26. Eight Hawkeyes combined for 11 hits. Kaitlyn Mullarkey (2), Angela Schmiederer (2), and Katy Taylor (2) each recorded multiple-hit games for the Hawkeyes.

BATS HEAT UP IN SOUTH CAROLINA
Five Hawkeyes hit .400 or better in five games at the Coastal Carolina Tournament from Feb. 26-28. Sophomore Katy Taylor led the Hawkeyes, batting .563 with nine hits in 16 at-bats. Redshirt senior Holly Hoffman and sophomore Cheyenne Pratt hit .500 on the weekend, while juniors Kaitlyn Mullarkey (.438) and Claire Frtisch (.400) each hit in the .400s.

1-2 PUNCH
Juniors Claire Fritsch and Kaitlyn Mullarkey have found a home at the top of the Iowa lineup, batting first and second, respectively, in each of Iowa’s last six games. During that span, the duo is hitting a combined .378 (14-for-37) with a .511 on-base percentage.

INCREASED SPEED
The Hawkeyes have already surpassed their 2015 stolen base total. After stealing 18 bags in all of 2015, Iowa has stolen 23 bases in 15 games this season. The Hawkeyes swiped nine bags at the Texas A&M-Corpus Christi Tournament from Feb. 12-14, six at the Total Control Sports Invitational on Feb. 19-21, and eight at the Coastal Carolina Invitational on Feb. 26-28. Junior Claire Fritsch leads the team with six stolen bases on the season, while sophomore Katy Taylor has five.

YOWAYS MAKES DEBUT
Ashley Yoways made her 2016 season debut in the circle at the Coastal Carolina Invitational on Feb. 26-28. The sophomore made two relief appearances on the weekend. She owns a 1.62 ERA after allowing one run on four hits and three walks in 4 and a third.

TAYLOR SHOWS SPEED
Katy Taylor is 5-for-6 in stolen bases this season. The sophomore transfer has stole two bases in one game two times this season (Texas A&M-Corpus Christi on Feb. 14 and Lipscomb on Feb. 20). The Owasso, Oklahoma, native has registered 18 hits on the season. Twelve of her 18 hits are infield singles.

SCOUTING TULSA
•Tournament host Tulsa is 11-4 on the season. All four of Tulsa’s losses have come by two runs or less.
•The Hurricane is led by junior outfielder Maddie Withee, who is batting .370 with 17 RBI, four doubles, and six runs scored.
•Senior Caitlin Sill, the reigning American Athletic Conference Pitcher of the Week owns a 5-1 record and a 1.11 ERA.
•The Hawkeyes own a 2-1 advantage in the all-time series. Iowa defeated Tulsa, 7-6, last year in Tulsa.

SCOUTING LAMAR
•Lamar owns a 10-4 record on the season.
•Junior Ashley McDowell currently leads the Cardinals at the plate, batting .425 with 17 hits in 40 at-bats.
•In the circle, LU is led by junior Ciara Luna. She owns a 5-1 record and a 1.76 ERA.
•Saturday will mark the first meeting between the Hawkeyes and the Cardinals.

KILIAN AT THE DISH
Freshman Mallory Kilian led the Hawkeye s at the plate at the Total Control Sports Invitational from Feb. 19-21. Kilian hit a blistering .667 on the weekend. The Fort Dodge, Iowa, native collected four hits in six at bats. Kilian reached base in all three plate appearances against UIC on Feb. 19. She registered a pair of singles, a walk, and scored a run.

CAREER DAY FOR MISEL
Kara Misel made her first two career starts at third base against Loyola-Chicago (Feb. 20) and Indiana State (Feb. 21). The junior reached base all three times against Indiana State, registering a pair of singles and a walk. The Solon, Iowa, native also scored a run in the contest.

FRITSCH SHINES IN HOME STATE
Sophomore Claire Fritsch led the Hawkeyes at the plate at the Texas A&M-Corpus Christi Tournament on Feb. 12-14. The Round Rock, Texas, native registered five hits in 13 at bats in her home state. She successfully advanced runners in 7-of-9 chances, and hit a .500 (3-for-6) with runners in scoring position.

ON DECK
The Hawkeyes travel to Honolulu, Hawaii, for the Rainbow Wahine Invitational from March 16-19.