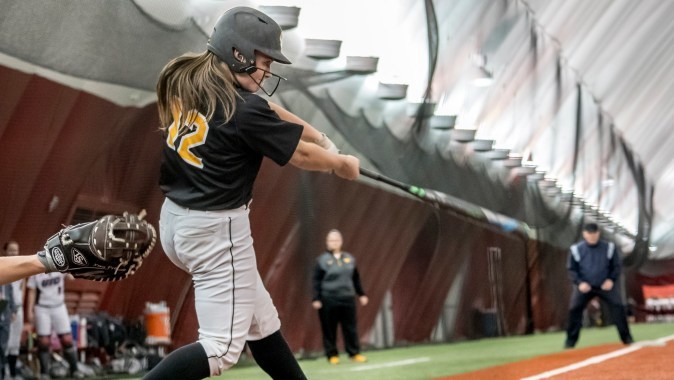 “Once we gave Lamar a couple runs, our offense had some chances and they took advantage of them,” said UI head coach Marla Looper. “We just kept fighting offensively, and that shows a lot of grit. We kept fighting all weekend. We inserted a lot of people throughout the weekend, especially today, in key situations and they came through for us.”

Iowa plated 12 runs in the final three innings to defeat Lamar for the second time in as many days. The Hawkeyes registered season-highs in hits (13) and runs scored (14). Seven of their 13 hits were for extra bases (4 doubles, 3 home runs).

Lamar took an early lead, plating a pair of runs in the bottom of the second on two singles, a sacrifice bunt, and an error.

A Whitney Repole home run cut the Lamar lead in half in the top of the third. The senior sent a solo blast to center — her first of the season and sixth of her career — to pull the Hawkeyes within one, 2-1.

The Hawkeyes tied the game in the top of the fourth with back-to-back doubles by redshirt junior Sammi Gyerman and redshirt senior Holly Hoffman.

The Cardinals took a 4-2 lead in the bottom of the fourth before the Hawkeyes took their first lead of the ball game in the fifth. Sophomore Katy Taylor led off the inning with a pinch-hit walk, before sophomore Angela Schmiederer sent a pinch-hit single to left. Junior Claire Fritsch followed with a walk to load the bases. Gyerman came through with an RBI single to left center — her second hit of the day. A wild pitch moved all the runners up, before Hoffman sent a sacrifice fly to right to give Iowa a 5-2 lead.

Lamar battled back, plating four runs in the bottom of the fifth. The Iowa bats stayed hot; however, scoring three runs in the top of the sixth to knot the game, 8-8. Sophomore Allie Wood and junior Kaitlyn Mullarkey each recorded hits in the inning, while Repole recorded a walk. Schmiederer (1) and Mullarkey (2) both registered RBIs.

After holding the Cardinals scoreless in the bottom of the sixth, Iowa took the lead for good in the top of the seventh. Wood, senior Erin Erickson, and Taylor led off the inning with two singles and a walk. With the bases loaded and one out, Schmiederer registered the game-winning grand slam to left. Her blast was the second of her career and first of the season.

“Angela has been pretty zeroed in for us the last few weeks,” said Looper. “We knew we had her in the dugout today to potentially go in that DP spot or to pinch hit. She just executed and did what she was asked to do. It’s really good to see her growth in that.”

After a walk by Fritsch, Mullarkey continued the rally with a two-run home run (4th of the season; 10th of her career) to left field to secure the 14-8 victory.

Shayla Starkenburg was credited with the win. The redshirt junior did not allow a hit or a run in two and a third. She struck out three. Junior Elizabeth Wiegand started the game for the Hawkeyes. She allowed six earned runs on eight hits and two walks. She struck out two in four and two-thirds.

“Shayla did a good job in relief today,” said Looper. “Liz held them through the first time and a half through the lineup and then we put ourselves in some holes. Shayla was able to stop it. That was nice to see after her shorter stint in game one.”

Schmiederer had a career day at the plate. The Prospect Heights, Illinois, native went 2-for-3 with a single, grand slam, and five RBIs. Mullarkey tied her career-high with four RBIs, while Hoffman plated two.

The Hawkeyes scored seven runs in the final four innings, but could not complete the comeback against the Hurricane.

Tulsa took an early 2-0 lead on a pair of solo home runs in the first and second inning. The Hurricane added seven more runs in the third on three hits and six walks to take a 9-0 lead.

The Hawkeyes got two back in the top of the fourth. Gyerman led off the inning with a single through the right side. Freshman Mallory Kilian and sophomore Allie Wood followed with back-to-back singles to plate Gyerman. Cheyenne Pratt continued the rally, reaching first on an error that scored Kilian to pull the Hawkeyes within seven (9-2).

The Iowa bats got hot in the top of the fifth. Senior pinch-hitter Haley Hansel, Fritsch, and Mullarkey registered three straight singles to load the bases for Gyerman. The San Pedro, California, native took advantage of the RBI opportunity, plating two runs on a double to left center.

With runners on second and third and no outs, Kilian launched a three run home run over the wall in left to pull the Hawkeyes within two runs (9-7). The blast was the first of Kilian’s career.

The Hawkeyes put a runner on in the sixth and the seventh, but could not come up with a hit.

Freshman Erin Riding silenced the Hurricane bats. The McKinney, Texas, native did not allow a run on two hits and a walk. She struck out four in three and a third.

The Hawkeyes return to action at the Rainbow Wahine Invitational in Honolulu, Hawaii, on March 16-19.

“We get a good week of preparation,” said Looper.”It’s midterm time, so it’s a good time to decompress and get back to some of the little things. We are going to have some great competition in Hawaii.”