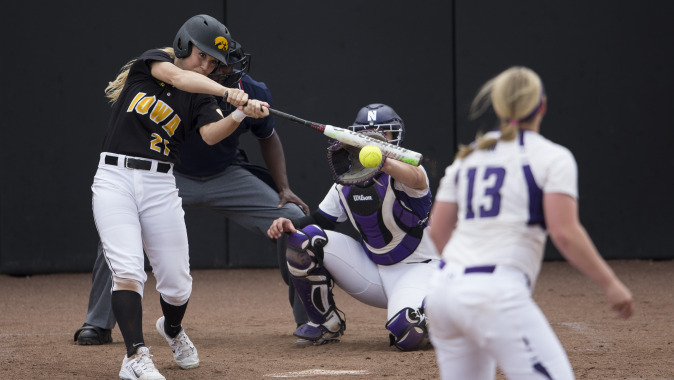 IN THE RANKINGS – B1G
Four Big Ten teams appear in the ESPN.com/USA Softball Division I Softball Collegiate Top 25 poll released on March 8. No. 2 Michigan and No. 17 Minnesota are ranked within the top 25, while Nebraska (20) and Ohio State (2) are receiving votes.

TAKING ON THE BEST
• Seven of Iowa’s 2016 opponents are coming off a 2015 NCAA Tournament appearance.
• Iowa is scheduled to play 15 games against those opponents this season.
• The teams include: Louisville, Texas, Nebraska, Northwestern, Missouri, Indiana State, and Minnesota.

SCHMIEDERER SLAM
Angela Schmiederer registered the game-winning grand slam against Lamar on March 6. The sophomore entered the game as a pinch hitter in the top of the fifth. After singling and scoring a run, Schmiederer remained in the game Iowa’s off ensive player. An RBI fielder’s choice and the game-winning grand slam followed. She registered a career-high five RBIs on the afternoon. BOMB SQUAD
Three diff erent Hawkeyes went deep against Lamar on March 6. Senior Whitney Repole hit her fi rst home run of the season — a solo shot — in the top of the third inning. Sophomore Angela Schmiederer registered the game-winning grand slam in the top of the seventh, while junior Kaitlyn Mullarkey capped off a sixth-run seventh inning with a two-run blast.

SCOUTING TEXAS
• Texas is 16-4 on the season and currently ranks 25th in the latest ESPN.com/USA Softball Collegiate Top 25 poll.
• The Longhorns are led by Lindsey Stephens who is batting .470 on the season.
• Tiarra Davis owns a 10-3 record and a 1.66 ERA in the circle.
• Texas owns a 3-2 advantage in the all-time series. The teams last met in 2014.

BATS HEAT UP IN SOUTH CAROLINA
Five Hawkeyes hit .400 or better in fi ve games at the Coastal Carolina Tournament from Feb. 26-28. Sophomore Katy Taylor led the Hawkeyes, batting .563 with nine hits in 16 at-bats. Redshirt senior Holly Hoffman and sophomore Cheyenne Pratt hit .500 on the weekend, while juniors Kaitlyn Mullarkey (.438) and Claire Frtisch (.400) each hit in the .400s.

INCREASED SPEED
The Hawkeyes have already surpassed their 2015 stolen base total. After stealing 18 bags in all of 2015, Iowa has stolen 27 bases in 19 games this season. The Hawkeyes swiped nine bags at the Texas A&M Corpus Christi Tournament from Feb. 12-14, six at the Total Control Sports Invitational on Feb. 19-21, eight at the Coastal Carolina Invitational on Feb. 26-28, and four at the Tulsa Tournament on March 5-6. Junior Claire Fritsch leads the team with six stolen bases on the season, while sophomore Katy Taylor has five.

TAYLOR SHOWS SPEED
Katy Taylor is 5-for-6 in stolen bases this season. The sophomore transfer has stole two bases in one game two times this season (Texas A&M-Corpus Christi on Feb. 14 and Lipscomb on Feb. 20). The Owasso, Oklahoma, native has registered 19 hits on the season. Thirteen of her 18 hits are infi eld singles.

KILIAN AT THE DISH
Freshman Mallory Kilian led the Hawkeyes at the plate at the Total Control Sports Invitational from Feb. 19-21. Kilian hit a blistering .667 on the weekend. The Fort Dodge, Iowa, native collected four hits in six at bats. Kilian reached base in all three plate appearances against UIC on Feb. 19. She registered a pair of singles, a walk, and scored a run.

CAREER DAY FOR MISEL
Kara Misel made her fi rst two career starts at third base against Loyola-Chicago (Feb. 20) and Indiana State (Feb. 21). The junior reached base all three times against Indiana State, registering a pair of singles and a walk. The Solon, Iowa, native also scored a run in the contest.

FRITSCH SHINES IN HOME STATE
Sophomore Claire Fritsch led the Hawkeyes at the plate at the Texas A&M-Corpus Christi Tournament on Feb. 12-14. The Round Rock, Texas, native registered fi ve hits in 13 at bats in her home state. She successfully advanced runners in 7-of-9 chances, and hit a .500 (3-for-6) with runners in scoring position.

NEWCOMERS
• Junior transfer Elizabeth Wiegand joins the team after spending two seasons with UT Martin. Wiegand appeared in 26 games with 21 starts for the Skyhawks in 2015. She led UT Martin in ERA (2.94), wins (12), appearances (26), starts (21), complete games (16), shutouts (3), innings pitched (135.2), and strikeouts (63) as a sophomore.
• Sophomore transfer Katy Taylor joins the Hawkeyes after spending a season at Labette Community College. Taylor helped the Cardinals to a 38-16 overall record and a Region VI Championship. She led the nation in stolen bases (89) and paced the Cardinals in hits (76), doubles (10), triples (3), walks (21), batting average (.435), and on base percentage (.485).
• Freshmen Erin Riding (pitcher), Mallory Kilian (pitcher/utility), and Brooke Rozier (catcher/utility) will all make their Hawkeye debuts in 2016.

STAFF UPDATES
• Jake Schumann joined the Iowa softball staff on Aug. 5, 2015. Schumann will handle the Hawkeye off ense. He joins the staff after spending last season as the associate head coach at Ole Miss. He has also served as the head coach at Florida International (2011-14), Texas A&M-Corpus Christi (2007-11), Texas A&M-Kingsville (2003-07), and Carl Albert State College (2001-03).
• Former Hawkeye Rachel West is Iowa’s new volunteer assistant coach. West appeared in 202 games for the Hawkeyes from 2005-09. The Burlington, Iowa, native still stands as one of the best base stealers in program history. West swiped 86 bags during her four-year career — a mark that ranks fourth in program history.
• Sharon Palma is in her fi rst year as the director of operations for the Iowa softball program. The Grand Rapids, Michigan, native came to Iowa after spending the 2014 season as an assistant coach at Ole Miss. A former professional pitcher for the Carolina Diamonds in the National Pro Fastpitch League, Palma has also spent time as an assistant coach at Florida International (2014) and IUPUI (2013), and a volunteer assistant coach at Michigan State (2012).

ON DECK
The Hawkeyes open Big Ten play with a three-game series at Indiana from March 25-27.