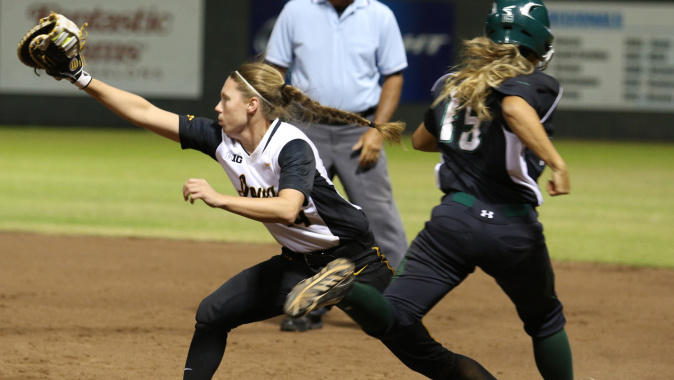 HONOLULU — The University of Iowa softball team fell, 4-3, in eight innings to Texas on Thursday afternoon in Rainbow Wahine Classic action. With the loss, the Hawkeyes fall to 7-15 on the season, while Texas — who is receiving votes in the latest top 25 polls — improves to 17-5.

“It came down to finishing today,” said UI head coach Marla Looper. “We needed the same grit we showed yesterday in order to finish. It’s frustrating because we always talk about it, but it came down to the little things. We have to do those little things every day and in every moment.”

Texas found the scoreboard first, plating a run in the top of the second. The Longhorns used a pair of Hawkeye errors and an RBI single up the middle to take a 1-0 lead.

Iowa fought back in the bottom of the third. Sophomore Cheyenne Pratt led off the inning with Iowa’s first hit of the game — an infield single to second. Sophomore Katy Taylor was awarded first on a hit by pitch that led to a Texas pitching change. With runners on first and second and two outs, junior Kaitlyn Mullarkey ripped a two-run triple down the right field line to give the Hawkeyes the lead. It marked her second triple of the season and the third of her career.

Redshirt junior Sammi Gyerman kept the rally alive with a walk. With runners on first and third, Gyerman took off for second to draw a throw that allowed Mullarkey to score to extend Iowa’s lead to 3-1.

The Hawkeyes threatened in the bottom of the sixth. Redshirt senior Holly Hoffman (single) and freshman Mallory Kilian (double) registered back-to-back hits with one out. Iowa’s Erin Erickson attempted a squeeze play, but the Longhorns got the out at the plate and then threw out Erickson at second who was trying to advance on the play to end the inning.

The Longhorns used that momentum to tie the game in the top of the seventh. Texas plated two runs on five singles and an Iowa error to knot the game, 3-3.

“Unfortunately, I think the momentum changed in the sixth inning when we attempted the squeeze and ran into an out,” said Looper. “When we got back on defense, we just didn’t play catch after that. We handed them the momentum and we couldn’t stop it.”

With the international tiebreaker rule in effect, Texas took the lead in the top of the eighth. The Longhorns used a sacrifice bunt and an RBI double to score the game winning run.

The Hawkeyes put pressure on the Longhorns in the bottom of the inning. Taylor was placed on second to start the inning, and junior Claire Fritsch moved her to second with a sacrifice bunt. Gyerman won a battle at the plate with a walk, but the Hawkeyes could not move the runner across.

Shayla Starkenburg (2-4) suffered the loss in the circle. The redshirt junior allowed two earned runs on nine hits and did not give up a walk. She struck out five in eight complete innings.

“Texas is a good ball club,” said Looper. “They have the mentality that they are going to win every time they step on the field. We are fortunate to get to play them. They are in and out of the rankings and are going to be one of the top teams in the Big 12. We hung right there with them. The game was in our hands, and we just didn’t hold onto it.

“When we get those little things down, I’m so confident in this team. We are dynamic, and when we play that way it’s fun to watch. I like the fact that we aren’t going to back down to teams like Texas. That’s how you grow as a program and as a team.”

The Hawkeyes return to action tomorrow with a 10 p.m. (CT) contest against Hawaii.