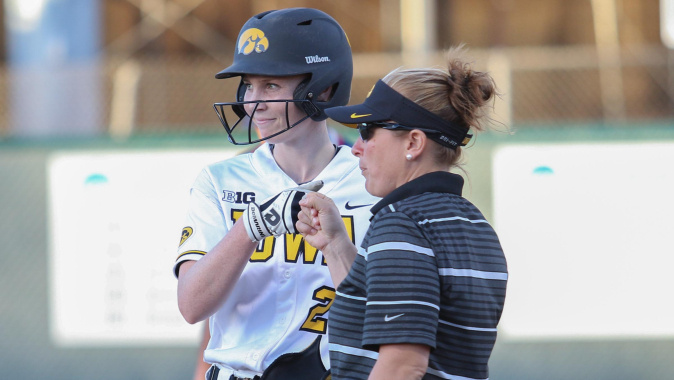 THIS WEEK
The University of Iowa softball team opens Big Ten play in Bloomington, Indiana, this weekend. The Hawkeyes begin a three-game set with the Hoosiers with a 5 p.m. (CT) contest on Friday. The series continues with a 12 p.m. (CT) game on Saturday, and concludes with an 11 a.m. (CT) contest on Sunday.

WATCH IT LIVE
All three games will be streamed live online via BTN Plus. To see if your cable package gives you access to BTN Plus contest, sign up for BTN Plus or learn more about it, visit btn2go.com.

SCOUTING INDIANA
•Indiana owns a 16-10 record on the season.
•Three Hoosiers are hitting above .300 this season, including: sophomore outfielder Rebecca Blitz (.367), junior utility Erin Lehman (.308), and sophomore utility Aimilia McDonough (.306).
•Freshman right hander Tara Trainer (8-6) and freshman southpaw Josie Wood (8-4) each have eight wins in the circle for the Hoosiers. Trainer leads the team with a 1.89 ERA in 81.1 innings, while Wood owns a 2.58 ERA in 84.0 innings.
•The Hawkeyes and Hoosiers have faced three common opponents this season. Indiana beat Texas A&M-Corpus Christi, 6-2, on Feb. 27, and edged out UIC, 3-2, on March 18. The Hoosiers host Indiana State for a nonconference match-up on Wednesday afternoon.

IN THE RANKINGS – B1G
Four Big Ten teams appear in the ESPN.com/USA Softball Division I Softball Collegiate Top 25 poll released on March 8. No. 2 Michigan and No. 22 Minnesota are ranked within the top 25, while Ohio State (23) and Nebraska (12) are receiving votes.

TAKING ON THE BEST
•Seven of Iowa’s 2016 opponents are coming off a 2015 NCAA Tournament appearance. •Iowa is scheduled to play 15 games against those opponents this season.
•The teams include: Louisville, Texas, Nebraska, Northwestern, Missouri, Indiana State, and Minnesota.

POWER SURGE
After registering 11 extra-base hits in all of 2015, junior Kaitlyn Mullarkey has hit 14 in just 24 games this season. The Park Ridge, Illinois, native leads the team in home runs (4) and triples (3), and ranks second on the team in doubles (7) this season.

SUCCESS IN THE CIRCLE
•Iowa posted a team ERA of 1.21 in five games at the Rainbow Wahine Classic from March 16-19.
•Elizabeth Wiegand posted a 0.55 ERA over 12.2 innings in Honolulu. The junior allowed just one earned run and did not surrender a free pass in that span. She was credited with the complete-game shutout win over Texas on March 16.
•Redshirt junior Shayla Starkenburg posted a 1.87 ERA over 15.0 innings in Hawaii, while sophomore Ashley Yoways registered a 1.75 ERA over four innings.
•Freshman Erin Riding and Starkenburg combined for a two-hit shutout against Hawaii on March 19. Each hurler surrendered one hit in the contest.

INCREASED SPEED
•After stealing 18 bags in all of 2015, Iowa has swiped 33 bases in 24 games this season. •Iowa is 33-for-38 on the base paths this season.
•Junior Kaitlyn Mullarkey leads the team with eight stolen bases, while junior Claire Fritsch and sophomore Katy Taylor each have six.

TAYLOR SHOWS SPEED
•Katy Taylor is 5-for-6 in stolen bases this season.
•The sophomore transfer has stolen two bases in one game two times this season (Texas A&M-Corpus Christi on Feb. 14 and Lipscomb on Feb. 20).
•The Owasso, Oklahoma, native has registered 23 hits on the season. Sixteen of her 23 hits are infield singles.

AROUND THE BIG TEN
•Hawkeye pitchers have struck out 49 batters looking this season — the second most in the Big Ten. •Iowa ranks fifth and sixth in the conference in stolen bases (33) and steal attempts (38), respectively. •The Hawkeyes rank seventh in the conference with 78 walks.
•Iowa is tied for eighth in the Big Ten in triples (4).
•Junior Kaitlyn Mullarkey is tied for second in the Big Ten with three triples.
•Mullarkey also ranks seventh in slugging percentage (.671), 10th in on-base percentage (.473), 14th in total bases (47), and is tied for third in hit by pitches (7), eighth in walks (14), and 12th in stolen bases. •Redshirt junior Sammi Gyerman and Mullarkey rank eighth and ninth, respectively, in doubles.

ON DECK
The Hawkeyes open their home slate with a midweek game against in-state rival Drake on March 30. First pitch is set for 5:30 p.m. (CT) from Bob Pearl Field.