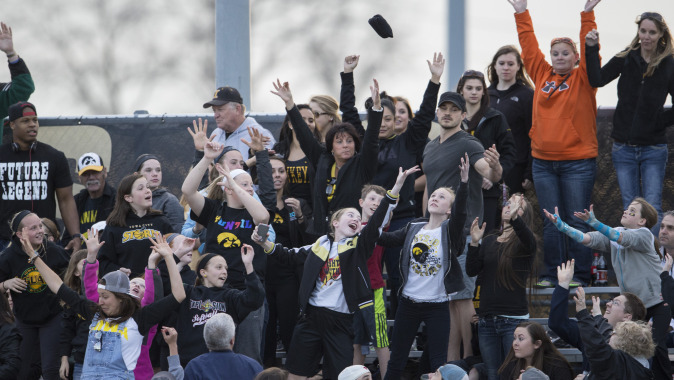 THIS WEEK
The University of Iowa softball team opens its home slate with a three-game series against Purdue this weekend. The Hawkeyes and Boilermakers open the weekend with a 5:30 p.m. (CT) contest on Friday, continue action with a 2 p.m. game on Saturday, and conclude the weekend with a 1 p.m. contest on Sunday.

SINGLE-GAME TICKETS
Tickets for this weekend are $5 for adults. All youth (18 & under) and University of Iowa students will be admitted free of charge.

PROMOTIONS
•Friday: The first 100 fans will receive a free Iowa softball beanie.
•Saturday: Saturday is PB&J day as all fans will receive a free peanut butter and jelly sandwich. Fans that bring a food donation for the Johnson County Crisis Center will receive free admission. Kids will be allowed to run the bases after the game.
•Sunday: The Hawkeyes will sign autographs following Sunday’s contest.

WATCH IT LIVE
Friday’s contest will be available on a single camera stream on Hawkeye All-Access at hawkeyesports.com. Saturday and Sunday’s games will be streamed live online via BTN Plus. To see if your cable package gives you access to BTN Plus contest, sign up for BTN Plus or learn more about it, visit btn2go.com.

SCOUTING PURDUE
•Purdue owns an 18-14 overall record and a 0-3 mark in Big Ten play.
•Three Boilermakers are hitting above .300: junior infielder Kristen Hoppman (.350), freshman Lauren Steward (.309), and senior Mary Gooding (.302).
•Senior Lilly Fecho leads the team with a 1.66 ERA and a 13-6 record. Fecho became Purdue’s all-time career strikeout leader with 732 earlier this season.
•The Boilermakers dropped all three games of their Big Ten opening series with No. 22 Minnesota last weekend. The Gophers defeated the Boilermakers 5-0, 4-1, and 4-3 in West Lafayette, Indiana.

THE SERIES
•The Hawkeyes own a 41-10 advantage in the all-time series.
•Iowa took 2-of-3 from the Boilermakers last season in West Lafayette, Indiana.
•Iowa has won five of the last six meetings between the two teams.

IN THE RANKINGS – B1G
Five Big Ten teams appear in the ESPN.com/USA Softball Division I Softball Collegiate Top 25 poll released on March 8. No. 2 Michigan, No. 22 Minnesota, and No. 24 Ohio State are ranked within the top 25, while Nebraska (2) and Illinois (1) are receiving votes.

POWER SURGE
After registering 11 extra-base hits in all of 2015, junior Kaitlyn Mullarkey has hit 15 in 27 games this season. The Park Ridge, Illinois, native leads the team in home runs (5) and triples (3), and ranks second on the team in doubles (7) this season.

MS. UTILITY
Sophomore Angela Schmiederer has registered 18 starts at three different positions this season. She has made eight starts behind the plate, seven in the outfield, and three as Iowa’s designated player. Five of Schmiederer’s 10 hits this season have been for extra bases.

HOFFMAN HOMECOMING
Redshirt senior Holly Hoffman led the Hawkeyes at the plate in her home state of Indiana from March 25-27. The Osceola, Indiana, native hit .333 with three hits in nine at bats. Two of her three hits were for extra bases (double, home run).

KILIAN AT THE DISH
Freshman Mallory Kilian leads the Hawkeyes with a .340 clip this season. The Fort Dodge, Iowa, native has started 15 games for the Hawkeyes. She has registered 16 hits in 47 at bats. Six of her 16 hits have been for extra bases (4 home runs, two doubles). Kilian is slugging .638 and owns an on base percentage of .426.

INCREASED SPEED
•After stealing 18 bags in all of 2015, Iowa has swiped 37 bases in 24 games this season.
•Iowa is 37-for-42 on the base paths this season.
•Junior Kaitlyn Mullarkey leads the team with 10 stolen bases, while junior Claire Fritsch and sophomore Katy Taylor each have seven.