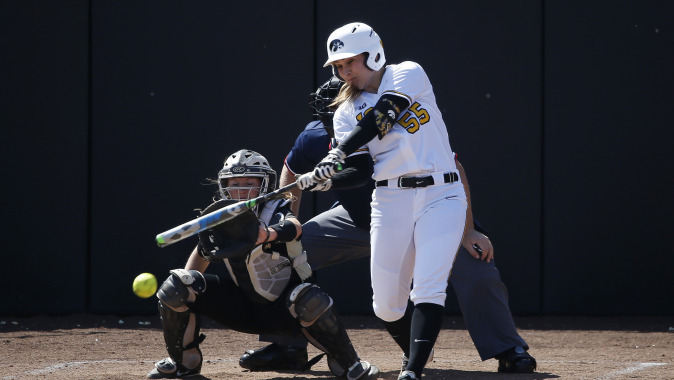 LINCOLN, Neb. — The University of Iowa softball team dropped a twinbill to Nebraska on Wednesday afternoon at Bowlin Stadium. The Hawkeyes lost the first game, 6-5, on a walk-off single, before falling, 3-1, in game two. Iowa falls to 9-23 on the season and 1-7 in Big Ten action.

“We had a lot of runners on and a lot of chances,” said UI head coach Marla Looper. “It’s frustrating. We just needed a little bit of luck and that key hit and it could have been a different story tonight.”

Iowa scored three runs in the top of the seventh inning, but could not complete the comeback in game one. Redshirt senior Holly Hoffman had a career game at the plate, registering career-bests in hits (4), and doubles. The Osceola, Indiana, native went 4-for-4 with two singles, two doubles, two RBIs, and a run scored.

“She was locked in that first game,” said Looper. “It was nice to see that. She has been making some adjustments and putting them into play. That’s what allowed her to have success today.”

After a scoreless third, the Huskers added another run in the fourth. Nebraska used a leadoff double, a pair of groundouts, a walk, and a double steal to take a 5-1 lead.

The Hawkeyes got one back in the top of the fifth. Gyerman started things off with a two-out walk, before Hoffman plated her with an RBI double to left.

Down three runs in the top of the seventh, the Hawkeyes utilized three hits and a walk to knot the game, 5-5. Gyerman started the rally with a one-out walk. Hoffman followed with a single up the middle — her fourth hit of the contest. With runners on first and second, sophomore Angela Schmiederer sent a two-run double down the right field line to pull the Hawkeyes within one.

After a Nebraska pitching change, sophomore Allie Wood came through with an RBI double to left to tie the game, 5-5. The Hawkeyes put the go-ahead run on third, but back-to-back groundouts ended the top of the inning.

A leadoff walk in the bottom of the seventh inning proved to be costly. After a sacrifice bunt and a groundout, a single up the middle secured the 6-5 win for the Huskers.

Shayla Starkenburg suffered the loss in the circle. The redshirt junior allowed five earned runs on seven hits and six walks. She struck out three in six and 2/3.

Nebraska found the scoreboard first in game two, plating a run on a solo home run to right center in the bottom of the first.

After two scoreless innings, the Huskers added to their lead in the fourth. Nebraska used a single and a double to stretch its lead to 2-0. The Huskers scored their final run of the contest in the fifth on a solo home run to left.

Three straight singles from Hoffman, sophomore Sarah Kurtz, and senior Whitney Repole loaded the bases in the top of the sixth. Sophomore Angela Schmiederer came through with an RBI single of her own to cut the Nebraska lead to two, 3-1. The Hawkeyes had the bases loaded with one out, but could not push any more runs across. Iowa left eight runners on base in the contest.

Elizabeth Wiegand took the loss in the circle. The junior allowed three earned runs on five hits and one walk. She struck out three in six innings.

Kurtz led the Hawkeyes at the plate with a multiple-hit effort. The Herndon, Virginia, native went 2-for-3 with a pair of singles.

Iowa returns to action this weekend when it travels to Evanston, Illinois, for a three-game series against Northwestern.