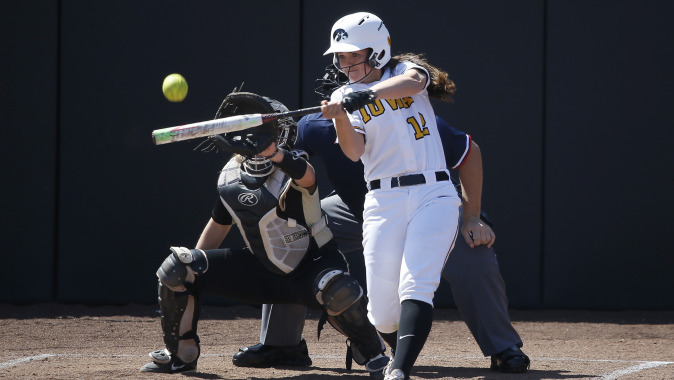 EVANSTON, Ill. — The University of Iowa softball team battled but dropped a doubleheader to Northwestern on Saturday at Drysdale Field. The Hawkeyes fall to 9-25 on the season and 1-9 in Big Ten action with the loss.

“We kept fighting back,” said UI head coach Marla Looper. “Our girls don’t have any quit. That’s what I told them. I’m proud of the fact that they don’t quit. We have to continue to pluck away and eventually we are going to come out on the winning end of this.”

Four Iowa home runs were not enough to lift the Hawkeyes past the Wildcats in game one. Senior Holly Hoffman doubled her season home run total with a pair of blasts — a new career high. Junior Kaitlyn Mullarkey and sophomore Angela Schmiederer also added a home run in the contest. Iowa plated six runs in the final three innings.

The Hawkeyes came out swinging in game one, plating three runs in the top of the first. Junior Claire Fritsch led it off with single through the right side. Mullarkey followed, sending her sixth home run of the season over the right field wall to put the Hawkeyes on the board. One batter later, Hoffman sent a solo shot to left to give the Hawkeyes a 3-0 lead.

Northwestern stormed back in the bottom of the second inning. The Wildcats used four hits — three singles and a home run — and two walks to take a 6-3 lead.

The Wildcats added to their lead in the fourth, utilizing a single, two walks, and a hit by pitch to pull ahead 7-3.

Iowa battled back in the top of the fifth. Mullarkey led off the two-out rally with an infield single. An error by the Northwestern third baseman on a ball off the bat of redshirt junior Sammi Gyerman allowed Mullarkey to score. With a runner on second and two outs, Hoffman sent her second home run of the day over the left field wall to pull the Hawkeyes within one, 7-6.

Northwestern came right back in the bottom of the inning, scoring four runs on a grand slam off the bat of senior Amy Letourneau. The blast extended the Northwestern lead to 11-6.

The Hawkeyes got one back in the top of the sixth. Senior Erin Erickson started it off with a walk, before Fritsch sent an RBI double to right to make it a four-run ball game. Northwestern fought back, adding a pair of insurance runs in the bottom of the sixth on a two-run home run.

Iowa battled in the top of the seventh, sending seven batters to the plate. Senior Whitney Repole led off the inning with a single. Schmiederer followed, sending her second home run of the season over the left field wall. The Hawkeyes put two more runners on base, but could not complete the comeback as Northwestern held on to win, 13-9.

Shayla Starkenburg took the loss in the circle. The redshirt junior allowed seven earned runs of seven hits and four walks. She struck out one in three and 2/3. Freshman Erin Riding surrendered six earned runs on five hits and a pair of walks in an inning and 2/3.

Fritsch, Mullarkey, Hoffman, and Schmiederer each registered two hits apiece for the Hawkeyes. Hoffman led the charge, going 2-for-3 with a career-high two home runs, a walk, and three RBIs.

Iowa scored five runs in the last two innings, but could not complete the comeback in game two. Schmiederer led the Hawkeyes at the plate with a 3-for-4 effort. The Prospect Heights, Illinois, native registered a pair of singles and a two-run home run. Her three hits marked a new career high.

The Wildcats used solo home runs in the second and third to take an early 2-0 lead. After a scoreless fourth, Northwestern plated three runs on a single, walk, and a three-run home run to extend its lead to 5-0.

Iowa found the scoreboard in the top of the sixth. Repole led off the inning with a single to center, before Schmiederer hit her second home run of the day to pull the Hawkeyes within three, 5-2. Schmiederer became the first opposing player to hit the roof of McGaw Hall — the building located beyond the left field wall.

After Northwestern plated an unearned run in the bottom of the sixth, the Iowa bats rallied in the seventh. Following two quick outs, Mullarkey was awarded first after being hit by the pitch. Gyerman followed with a single up the middle, and both runners moved up on a wild pitch. Hoffman kept the rally alive with a walk to load the bases for Repole. The senior came through with a two-run single to center. Schmiederer kept it going with an RBI single of her own — her third hit of the game — to pull the Hawkeyes within one. Iowa put the tying run on third and the go-ahead run on first, but could not complete the comeback.

“You tip your hat to our team for continuing to fight,” said Looper. “We never gave up. It was a hard fought battle today, but the match isn’t over yet.”

The Hawkeyes and Wildcats wrap up the three-game series tomorrow. First pitch is set for 12 p.m. (CT).