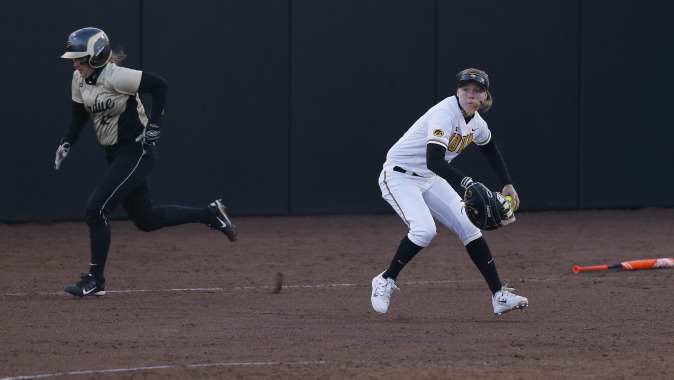 EVANSTON, Ill. — The University of Iowa softball team dropped a 9-5 decision to Northwestern on Sunday afternoon at Drysdale Field. The Wildcats secured the 3-0 Big Ten series sweep with the win.

“We got off to a hot start,” said UI head coach Marla Looper. “That’s one thing that we’ve been pretty good at. We just have to stay ahead instead of always trying to come back from a deficit. We are right there, but we just have to go take it. We are great at fighting when we are behind, but it’s about time that we get that knockout punch.”

Kaitlyn Mullarkey put the Hawkeyes on the board in the top of the first. The junior sent her seventh home run of the season and the 13th of her career over the center field wall to give the Hawkeyes a 1-0 lead.

Iowa added to its lead in the top of the third. Sophomore Katy Taylor led off the inning with a walk, stole second, and advanced to third on a groundout by junior Claire Fritsch. With a runner on third and one out, Mullarkey laid down a perfectly-placed bunt single to plate Taylor. After Mullarkey moved herself into scoring position with her 11th stolen base of the season, redshirt senior Holly Hoffman capitalized on the RBI opportunity with a double to right center to give the Hawkeyes a 3-0 lead.

Northwestern stormed back in the bottom of the third. The Wildcats used a hit by pitch, single, and a three-run home run to knot the game, 3-3.

The Hawkeyes battled in the top of the seventh. Redshirt junior Sammi Gyerman and Hoffman led off the inning with back-to-back singles, before senior Whitney Repole came through with an RBI single of her own. One batter later, pinch-runner Haley Hansel scored from third on a wild pitch to bring the Hawkeyes within four, 9-5. Sophomore Angela Schmiederer drew a walk, but three straight outs followed as Northwestern held on for the series sweep.

Mullarkey ended the day a triple shy of the cycle. The Park Ridge, Illinois, native went 3-for-4 with a bunt single, double, home run, and two RBIs. Hoffman and Repole also had multiple-hit games for the Hawkeyes.

Junior Elizabeth Wiegand took the loss in the circle. She allowed four earned runs of three hits and a walk in two and 1/3. Erin Riding got the start for the Hawkeyes. The freshman allowed three earned runs on three hits. She struck out a career-high five in three innings. Freshman Mallory Kilian and redshirt junior Shayla Starkenburg both surrendered an earned run in 1/3 of an inning in relief.