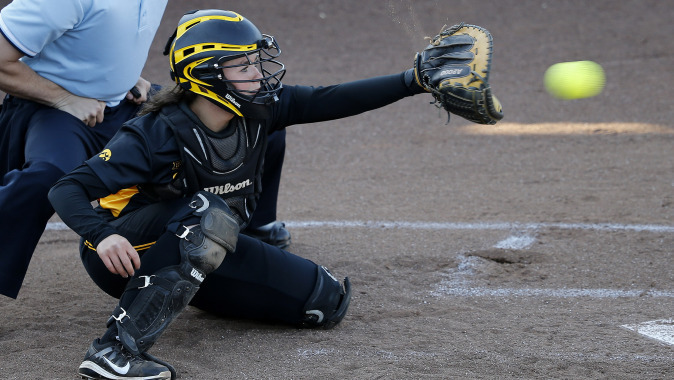 THIS WEEK
The University of Iowa softball team hosts Wisconsin for a three-game Big Ten Conference series at Bob Pearl Field this weekend. The Badgers and Hawkeyes will kick off the series at 5:30 p.m. (CT) on Friday, continue action with a 2 p.m. contest on Saturday, and conclude the series Sunday at 1 p.m.

PROMOTIONS
•Friday: The first 200 fans will receive a free Iowa softball mini bat.
•Saturday: Free Iowa softball pennants will be available for the first 250 fans, and kids can run the bases after the game.
•Sunday: The team will sign autographs following the game.

LISTEN/FOLLOW ALONG
Live audio is available for all three games on Hawkeye All-Access at hawkeyesports.com. Play-by-play announcer Rob Brooks will call the action from Bob Pearl Field. Live stats are also available on the softball schedule page on hawkeyesports.com.

THE SERIES
•Iowa owns a 34-15 advantage in the all-time series.
•The Hawkeyes won a three-game set, 2-1, in Madison, Wisconsin, last season. The Hawkeyes won the first contest, 16-4 (5 innings), before Wisconsin won game two, 5-4. Iowa won the rubber match with a 3-2 victory in 10 innings.

IN THE RANKINGS – B1G
Four Big Ten teams appear in the ESPN.com/USA Softball Division I Softball Collegiate Top 25 poll released on April 12. No. 2 Michigan, No. 21 Minnesota, and No. 23 Ohio State are ranked within the top 25, while Nebraska is receiving 16 votes.

CLUTCH MULLARKEY
With the Hawkeyes down by two in the bottom of the seventh inning against Drake on April 13, junior Claire Fritsch started a two-out rally when she reached on an error by the Drake second baseman. It proved to be a costly mistake as junior Kaitlyn Mullarkey blasted the game-tying, two-run home run over the wall in left center to send the game into extra innings. Mullarkey came through with the bases loaded in the top of the eighth. The Park Ridge, Illinois, native hit a rocket off the glove of the Drake first baseman that scored the game-winning run.

6-RUN 4TH LEADS HAWKEYES PAST UNI
The Hawkeyes put up six runs in the bottom of the fourth inning to defeat Northern Iowa on April 12. Sophomore Angela Schmiederer led off the inning with a single, before senior Whitney Repole and freshman Mallory Kilian were both awarded first on a hit by pitch. Sophomore Sarah Kurtz came through with an RBI single to put the Hawkeyes on the board. After a wild pitch allowed Repole to score, Claire Fritsch reached on an error that plated Kilian. Junior Kaitlyn Mullarkey came through with an RBI double to left, before redshirt junior Sammi Gyerman plated two more runs on a single up the middle.

LOOKING BACK
Redshirt junior Shayla Starkenburg won the rubber match between the Hawkeyes and Badgers in Madison, Wisconsin, last season on April 12. Starkenburg earned the complete-game win in the circle, shining in a pitcher’s duel with a career-high 11 strikeouts. The Ankeny, Iowa, native allowed just two earned runs to help the Hawkeyes to 3-2 victory over the Badgers.

HOFFMAN HEATS UP
Holly Hoffman is swinging the hot bat for the Hawkeyes in conference action. The redshirt senior is hitting .485 in Big Ten play. In 10 conference games, Hoffman is slugging 1.061. Hoffman has registered 10 extra-base hits (5 doubles, 1 triple, and 4 home runs) during that span.

AROUND THE BIG TEN
•The Hawkeyes rank fifth in the conference with 46 stolen bases. Iowa pitchers have struck out 66 batters looking this season — the second most in the Big Ten.
•Junior Kaitlyn Mullarkey is tied for first in the Big Ten with 10 hit by pitches, fifth in triples (3), seventh in home runs (8), and 10th in stolen bases (11).

POWER SURGE
After registering 11 extra-base hits in all of 2015 (59 games), junior Kaitlyn Mullarkey has hit 20 in 37 games this season. The Park Ridge, Illinois, native leads the team in home runs (8), and triples (3), and is tied for first on the team in doubles (9).

IN CONFERENCE ACTION
Three Hawkeyes are hitting above .300 in conference action. Sophomore Cheyenne Pratt is hitting .500, while redshirt senior Holly Hoffman (.485) and sophomore Allie Wood (.429) both have averages in the .400s. Senior Whitney Repole is hitting .391 in 11 conference games this season.

INCREASED SPEED
•After stealing 18 bags in all of 2015, Iowa has swiped 46 bases in 37 games this season.
•Iowa is 46-for-53 on the base paths this season.
•Junior Kaitlyn Mullarkey leads the team with 11 stolen bases, while junior Claire Fritsch has nine.

3-FOR-4
•Sammi Gyerman led the team with a 3-for-4 effort at the plate against Purdue on April 2.
•The redshirt junior registered a single and a pair of home runs in the contest. She tallied four of Iowa’s seven RBIs in the contest. It marked the third time in her career she hit two or more home runs in a single game.

MS. UTILITY
Sophomore Angela Schmiederer has registered 27 starts at three different positions this season. She has made 12 starts behind the plate, 11 in the outfield, and four as Iowa’s designated player. Ten of Schmiederer’s 21 hits this season have been for extra bases, including a game-winning grand slam against Lamar on March 6.

ON DECK
The Hawkeyes host Missouri for a doubleheader at Bob Pearl Field on April 19.