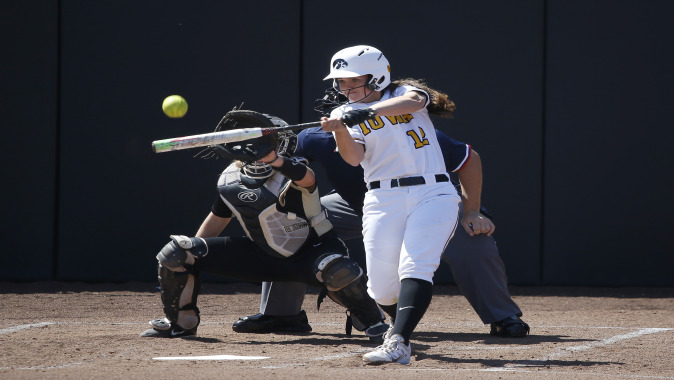 THIS WEEK
The University of Iowa softball team hosts No. 18 Missouri for a midweek doubleheader on Tuesday before traveling to Ames, Iowa, to take on in-state foe Iowa State on Wednesday. Game one of Tuesday’s doubleheader is set for 3 p.m. (CT) at Bob Pearl Field, with game two following. Wednesday’s Iowa Corn Cy-Hawk Series showdown is scheduled to begin at 4 p.m. (CT) at the Cyclone Sports Complex in Ames, Iowa.

WATCH IT LIVE
Both games of Tuesday’s doubleheader will be streamed live online via BTN Plus. To see if your cable package gives you access to BTN Plus content, sign up for BTN Plus, or learn more about it, visit btn2go.com. A live stream of Wednesday’s contest will be available on cyclones.tv. For more information, visit http://bit.ly/1WbGOg6.

LISTEN/FOLLOW ALONG
Live audio is available for all three games on Hawkeye All-Access at hawkeyesports.com. Play-by-play announcer Rob Brooks will call the action from Bob Pearl Field, and Zach Mackey will have the call from the Cyclone Sports Complex. Live stats are also available on the softball schedule page on hawkeyesports.com.

THE SERIES
•Missouri owns an 8-14 advantage in the all-time series. •The Tigers defeated the Hawkeyes, 10-2, in six innings in Columbia, Missouri.

THE CY-HAWK SERIES
•Iowa leads Iowa State in the annual Iowa Corn Cy-Hawk Series, 12-10. A win over the Cyclones on Wednesday would seal the series win for the Hawkeyes. •Since its inception in 2004, Iowa has won the Iowa Corn Cy-Hawk series five times. The Cyclones clinched their sixth victory last season. •Iowa softball owns a 32-29-2 advantage in the all-time series. The Cyclones defeated the Hawkeyes, 5-4, at Pearl Field last season.

STATE CHAMPIONSHIP
•A win over the Cyclones on Wednesday would seal the in-state sweep for the Hawkeyes. •Iowa defeated Northern Iowa, 6-3, on April 12 at Bob Pearl Field, before registering a walk-off win over Drake in eight innings on April 13.

IN THE RANKINGS – B1G
Four Big Ten teams appear in the ESPN.com/USA Softball Division I Softball Collegiate Top 25 poll released on April 12. No. 2 Michigan, No. 21 Minnesota, and No. 23 Ohio State are ranked within the top 25, while Nebraska is receiving 16 votes.

TAKING ON THE BEST
•Seven of Iowa’s 2016 opponents are coming off a 2015 NCAA Tournament appearance. •Iowa is scheduled to play 15 games against those opponents this season. •The teams include: Louisville, Texas, Nebraska, Northwestern, Missouri, Indiana State, and Minnesota.

.500 +
Redshirt senior Holly Hoffman and junior Claire Fritsch each hit .500 or better in a three-game series against Wisconsin last weekend. Hoffman led the team with a .556 clip, while Fritsch hit .500 over the three-game set.

6-RUN 4TH LEADS HAWKEYES PAST UNI
The Hawkeyes put up six runs in the bottom of the fourth to defeat Northern Iowa on April 12. Sophomore Angela Schmiederer led off the inning with a single, before senior Whitney Repole and freshman Mallory Kilian were both hit by pitch. Sophomore Sarah Kurtz came through with an RBI single to put the Hawkeyes on the board. After a wild pitch allowed Repole to score, Claire Fritsch reached on an error that plated Kilian. Junior Kaitlyn Mullarkey came through with an RBI double to left, before redshirt junior Sammi Gyerman plated two more runs on a single up the middle.

HOFFMAN IN B1G ACTION
Holly Hoffman is swinging the hot bat for the Hawkeyes in conference action. The redshirt senior is hitting .500 in Big Ten play. In 13 conference games, Hoffman is slugging .976. She has registered 10 extra-base hits (6 doubles, 1 triple, and 4 home runs) during that span.

AROUND THE BIG TEN
•The Hawkeyes rank fifth in the conference with 48 stolen bases. •Iowa pitchers have struck out 76 batters looking this season — the second most in the Big Ten. •Junior Kaitlyn Mullarkey is tied for first in the Big Ten with 11 hit by pitches, fifth in triples (3), ninth in stolen bases (12), and 10th in home runs (8).

POWER SURGE
After registering 11 extra-base hits in all of 2015 (59 games), junior Kaitlyn Mullarkey has hit 20 in 40 games this season. The Park Ridge, Illinois, native leads the team in home runs (8), and triples (3), and is tied for first on the team in doubles (9).

INCREASED SPEED
•After stealing 18 bags in all of 2015, Iowa has swiped 48 bases in 40 games this season. •Iowa is 48-for-55 on the base paths this season. •Junior Kaitlyn Mullarkey leads the team with 12 stolen bases, while junior Claire Fritsch and sophomore Katy Taylor each have nine.

MS. UTILITY
Sophomore Angela Schmiederer has registered 30 starts at three different positions this season. She has made 12 starts behind the plate, 14 in the outfield, and four as Iowa’s designated player. Ten of Schmiederer’s 25 hits this season have been for extra bases, including a game-winning grand slam against Lamar on March 6.

NEWCOMERS
•Junior transfer Elizabeth Wiegand joins the team after spending two seasons with UT Martin. Wiegand appeared in 26 games with 21 starts for the Skyhawks in 2015. She led UT Martin in ERA (2.94), wins (12), appearances (26), starts (21), complete games (16), shutouts (3), innings pitched (135.2), and strikeouts (63) as a sophomore. •Sophomore transfer Katy Taylor joins the Hawkeyes after spending a season at Labette Community College. Taylor helped the Cardinals to a 38-16 overall record and a Region VI Championship. She led the nation in stolen bases (89) and paced the Cardinals in hits (76), doubles (10), triples (3), walks (21), batting average (.435), and on base percentage (.485). •Freshmen Erin Riding (pitcher), Mallory Kilian (pitcher/utility), and Brooke Rozier (catcher/utility) will all make their Hawkeye debuts in 2016.

STAFF UPDATES
•Jake Schumann joined the Iowa softball staff on Aug. 5, 2015. Schumann will handle the Hawkeye offense. He joins the staff after spending last season as the associate head coach at Ole Miss. He has also served as the head coach at Florida International (2011-14), Texas A&M-Corpus Christi (2007-11), Texas A&M-Kingsville (2003-07), and Carl Albert State College (2001-03). •Former Hawkeye Rachel West is Iowa’s new volunteer assistant coach. West appeared in 202 games for the Hawkeyes from 2005-09. The Burlington, Iowa, native still stands as one of the best base stealers in program history. West swiped 86 bags during her four-year career — a mark that ranks fourth in program history. •Sharon Palma is in her first year as the director of operations for the Iowa softball program. The Grand Rapids, Michigan, native came to Iowa after spending the 2014 season as an assistant coach at Ole Miss. A former professional pitcher for the Carolina Diamonds in the National Pro Fastpitch League, Palma has also spent time as an assistant coach at Florida International (2014) and IUPUI (2013), and a volunteer assistant coach at Michigan State (2012).

ON DECK
The Hawkeyes host Penn State for a three-game series at Bob Pearl Field from April 22-24.