Frankos Fights to Get on Field 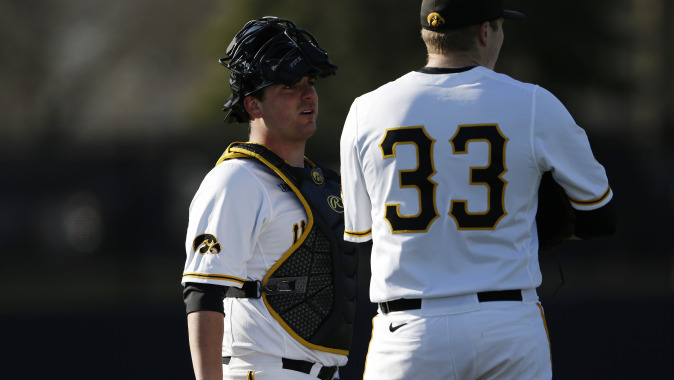 Frankos has played the past two seasons with bicep tendinitis and he also had a bum hip last year. He had hip labrum surgery in June, 2015, and spent the summer rehabbing for his senior season, but a week before the start of 2016, the other hip gave way.

“Unfortunately, his body is breaking down on him,” said UI head coach Rick Heller. “He’s playing with injuries that aren’t going to get better and aren’t going to heal. He is fighting through them.”

The injuries were never career-threatening, but they forced Frankos to establish residence in the Iowa training room. He gets to the ballpark 1 1/2-to-two hours before his teammates and stays late for recovery.

He’s in the training room five or six hours before the game is scheduled to begin.

“I knew that this was my last year of baseball with that last hip tear,” said Frankos, a native of Park Ridge, Illinois. “I do a lot of stuff to keep myself as loose as I can.”

Frankos has learned to tolerate the pain. He says playing through the pain keeps him sharper behind the plate because he knows he can’t take plays off. His relationship with teammates pushes him to do whatever it takes to contribute to the team’s success.

“I am doing what I can to be out there with this group of guys,” said Frankos. “I am running out of time playing with them, especially the seniors that I came in with. It’s the mentality we all have.

“I have 15 to 20 games left in my baseball career, so I’ll do anything to stay out there at this point.”

Frankos has played 28 games this season with 14 starts. His work load has increased with the start of Big Ten Conference play, as he has been in the starting lineup in nine of Iowa’s 12 games. He is third on the team with a .294 batting average.

During Iowa’s series-opening victory against Illinois on April 9, Frankos had the game-winning RBI in the bottom of the 10th inning. Frankos, batting in the cleanup position for the first time in his career, laid down a bunt on a safety squeeze to plate Joel Booker and send the Hawkeyes to a 4-3 walk-off victory.

“Winning helps with the pain,” said Frankos. “Early on in the year, losing added to it. We’ve turned it around and that’s what you play for. I got the bunt down and to see the team running after you sums up everything as to what you’re here for and what you’re doing.”

Heller isn’t surprised by Frankos’ willingness to leave it all on the field. It’s why his teammates voted him one of the four team captains at the start of the season.

“(Playing through the injuries) shows the type of character Jimmy has and the type of person he is,” said Heller. “He’s a team-first guy and he always has been. He does whatever he can to help the team win.”

The Hawkeyes open a nine-game home stand Friday, hosting No. 18/21 Michigan in the first of a three-game weekend series at Duane Banks Field.