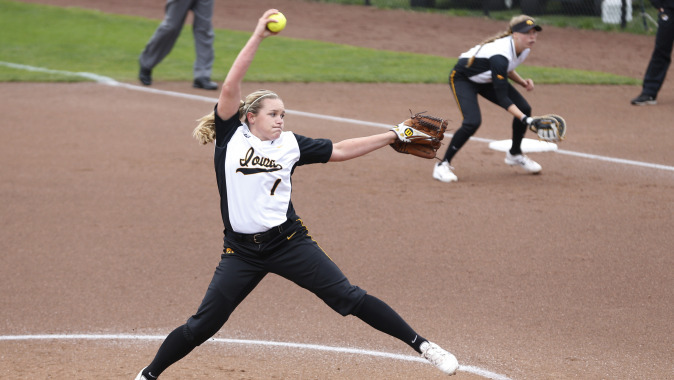 THIS WEEK
The University of Iowa softball team hosts Penn State for a three-game Big Ten Conference series at Bob Pearl Field this weekend. The Hawkeyes and Nittany Lions will kick off the three-game set on Friday at 6 p.m. (CT). The series will continue with a 2 p.m. contest on Saturday, and conclude Sunday at 1 p.m.

AWARENESS DAY
The softball program hosts its fourth annual Awareness Game this Saturday, April 23. The Hawkeyes have volunteered with seven local organizations — Hope Lodge, UI REACH, Big Brothers Big Sisters, VA Medical Center, Iowa City Animal Center, Grant Wood Area Education Agency, and Ronald McDonald House — throughout the year. The team will honor those organizations at the annual game, which is designed to bring awareness to the great things each organization does in the community.

CY-HAWK SHOWDOWN RESCHEDULED
The team’s Iowa Corn Cy-Hawk Series game against Iowa State, originally scheduled for April 20, has been postponed. The game will now be played on Wednesday, April 27. First pitch is scheduled for 3 p.m. (CT) from the Cyclone Sports Complex in Ames, Iowa.

SATURDAY PARKING
Shuttle buses for those attending Saturday’s game versus Penn State and the Musco Twilight track and field meet will be in operation beginning at 10 am. (CT). The shuttles will leave from the Hawkeye Commuter parking lot and drop off inside the softball complex. Buses will run continuously until the conclusion of the Musco meet.

WATCH IT LIVE
Sunday’s game will be streamed live online via BTN Plus. To see if your cable package gives you access to BTN Plus content, sign up for BTN Plus, or learn more about it, visit btn2go.com. A single-camera live stream will be available on Friday and Saturday via Hawkeye All-Access at hawkeyesports.com.

LISTEN/FOLLOW ALONG
Live audio is available for all three games on Hawkeye All-Access at hawkeyesports.com. Play-by-play announcer Rob Brooks will call the action from Bob Pearl Field. Live stats are also available on the softball schedule page on hawkeyesports.com.

SCOUTING PENN STATE
•Penn State owns a 24-17 overall record and an 11-3 mark in Big Ten action.
•Eight Nittany Lions are hitting .300 or better on the season. The team is led by senior outfielder/pitcher Macy Jones. She’s hitting .409 and slugging .748 in 40 games this season.
•Junior pitcher Marlaina Laubach leads the team with a 2.84 ERA in the circle. Laubach (9-8) and freshman Madison Seifert (9-4) each have nine wins this season.

THE SERIES
•Iowa owns a 40-18 advantage in the all-time series.
•Friday will mark the first meeting between the two teams since 2013. The Nittany won the three-game series, 2-1, in Iowa City, Iowa.

IN THE RANKINGS – B1G
Four Big Ten teams appear in the ESPN.com/USA Softball Division I Softball Collegiate Top 25 poll released on April 19. They include: No. 3 Michigan, No. 23 Minnesota, No. 24 Nebraska, and No. 25 Ohio State.

PRATT LEADS OFF
Sophomore Cheyenne Pratt led the team at the plate in a doubleheader against Missouri on April 19. The Festus, Missouri, native singled in the first contest and was inserted as Iowa’s leadoff batter in game two. She came through with a 2-for-3 effort at the dish — her first multiple hit performance of 2016.

.500 +
Redshirt senior Holly Hoffman and junior Claire Fritsch each hit .500 or better in a three-game series against Wisconsin last weekend. Hoffman led the team with a .556 clip, while Fritsch hit .500 over the three-game set.

HOFFMAN IN B1G ACTION
Holly Hoffman is swinging the hot bat for the Hawkeyes in conference action. The redshirt senior is hitting .500 in Big Ten play. In 13 conference games, Hoffman is slugging .976. She has registered 10 extra-base hits (6 doubles, 1 triple, and 4 home runs) during that span.

AROUND THE BIG TEN
•The Hawkeyes rank fifth in the conference with 48 stolen bases. Iowa pitchers have struck out 78 batters looking this season — the second most in the Big Ten.
•Junior Kaitlyn Mullarkey is tied for first in the Big Ten with 11 hit by pitches, fifth in triples (3), 10th in stolen bases (12), and 11th in home runs (8).
•Redshirt junior Sammi Gyerman is tied for third in the conference with three sacrifice flies this season.

POWER SURGE
After registering 11 extra-base hits in all of 2015 (59 games), junior Kaitlyn Mullarkey has hit 20 in 40 games this season. The Park Ridge, Illinois, native leads the team in home runs (8), and triples (3), and is tied for first on the team in doubles (9).

INCREASED SPEED
•After stealing 18 bags in all of 2015, Iowa has swiped 48 bases in 40 games this season.
•Iowa is 48-for-55 on the base paths this season.
•Junior Kaitlyn Mullarkey leads the team with 12 stolen bases, while junior Claire Fritsch and sophomore Katy Taylor each have nine.

MS. UTILITY
Sophomore Angela Schmiederer has registered 30 starts at three different positions this season. She has made 13 starts behind the plate, 15 in the outfield, and four as Iowa’s designated player. Ten of Schmiederer’s 26 hits this season have been for extra bases, including a game-winning grand slam against Lamar on March 6.

ON DECK
The Hawkeyes travel to Ames, Iowa, for the Iowa Corn Cy-Hawk Series showdown against Iowa State on April 27. First pitch is set for 3 p.m. (CT).