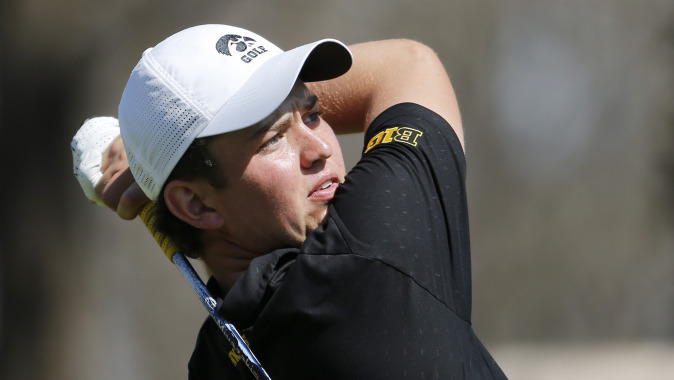 NEWBURGH, Ind. — The University of Iowa men’s golf team sits in third place at the Big Ten Championships after three Hawkeyes shot under par in Friday’s opening round. The Hawkeyes carded a first round, three-under-par 285.

“I’m pleased with today’s start,” said UI head coach Tyler Stith. “We showed patience and discipline throughout the entire round.

“Tomorrow is a completely new day. We need to refocus ourselves and be ready for the challenge.”

Leading the way for the Hawkeyes on Friday was junior Carson Schaake. Co-medalist of last year’s Big Ten Championships, Schaake carded a two-under-par 70 in the first round, making par or better on 16 holes, including five birdies. He is currently tied for sixth and is two strokes behind tournament leaders Charlie Danielson (Illinois) and Joe Brooks (Maryland).

“Today was a solid round overall,” said Schaake. “I made the round easy. I stuck to my game plan of hitting fairways and greens and made a couple putts for birdie. The team played great today and we are in perfect position going into tomorrow. If we put together another solid round tomorrow, we will have a chance going into Sunday.”

Right behind Schaake are junior Raymond Knoll and freshman Matthew Walker, who are tied for 13th at one-under-par 71. Knoll’s opening round 71 marks the fifth time in six rounds he has made par or better. Walker’s first round was highlighted by a bogey-free second nine, which included consecutive birdies on holes three, four, five, and six. He was three strokes over par after making the turn on hole 18.

Senior Nate Yankovich carded a one-over-par 73 and is tied for 25th, while fellow senior Voramate Aussarassakorn is tied for 59th following a first round 79 (+7).

The Hawkeyes return to Victoria National Golf Club on Saturday morning for a second round of 18. Tee times begin at 9 a.m. (CT) off the first and 10th tees. Live scoring is available at golfstat.com.