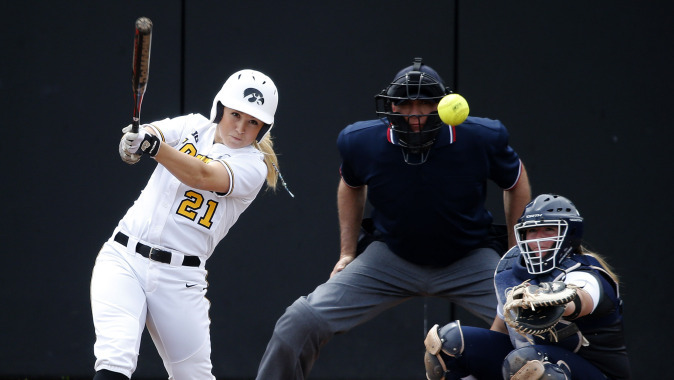 CHAMPAIGN, Ill. — The University of Iowa softball team dropped a twinbill to Illinois on Friday evening at Eichelberger Field. The Illini defeated the Hawkeyes, 5-1, in both contests.

Illinois got the bats going early in game one, plating two runs in the bottom of the first inning. The Fighting Illini used three straight singles and an Iowa error to take a 2-0 lead.

The Hawkeyes fought back in the top of the third. Junior Kaitlyn Mullarkey led it off with a walk and moved to third on a single by redshirt junior Sammi Gyerman. With runners on first and third and two outs, Gyerman and Mullarkey combined for the double steal to cut the Illini lead in half, 2-1.

The Fighting Illini added to their lead, plating a run in the fourth on a walk, sacrifice bunt, and an RBI single. Illinois added two more in the sixth on a hit by pitch, two singles, and an error to seal the 5-1 victory.

Shayla Starkenburg (4-13) took the loss in the circle. The redshirt junior allowed five runs — two earned — on seven hits and two walks. She struck out three in five innings of work. Illinois junior Breanna Wonderly (13-9) registered the complete-game win for the Illini. She held the Hawkeyes to one run on four hits and struck out two.

After two scoreless innings in game two, Illinois took advantage of a pair of Iowa miscues in the third. A leadoff triple and two Iowa errors gave the Illini a 2-0 lead. They extended their lead in the fourth on an error, single, double, and a two-run home run to take a 5-0 advantage.

The Hawkeyes plated their only run of the contest in the fifth. Senior Whitney Repole led off the inning with a walk, and senior Erin Erickson moved her to second on a sacrifice bunt. After a groundout moved Repole to third, an illegal pitch allowed her to score to put the Hawkeyes on the board. The Hawkeyes followed with three straight singles, but could not plate another run as the Illini held on to win, 5-1.

Elizabeth Wiegand (7-11) suffered the loss in the circle. The junior allowed five runs — four earned — on seven hits and a walk. She struck out two in six innings. Wonderly (14-9) notched her second complete-game win of the day, allowing one earned run on eight hits and three walks.

Sophomore Cheyenne Pratt, Mullarkey, and Gyerman — Iowa’s 1-2-3 hitters — each recorded two hits in the contest. The trio went a combined 6-for-11 in game two.

The Hawkeyes and Fighting Illini wrap up the three-game series with a 1 p.m. (CT) contest tomorrow.