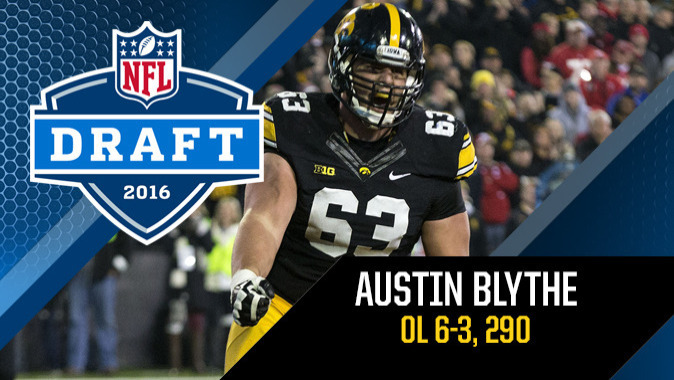 IOWA CITY, Iowa — University of Iowa senior offensive lineman Austin Blythe was selected by Indianapolis in the seventh round of Saturday’s NFL Draft. Blythe was the 248th player picked overall.

A native of Williamsburg, Iowa, Blythe is the 15th Hawkeye offensive lineman taken in the last 14 NFL drafts.

A 6-foot-2, 291-pound center, Blythe made 49 starts during his Hawkeye career, including the final 45 games in a row. He was named permanent offensive team captain after Iowa’s 12-2 season in 2015 that included 12 consecutive victories, a Big Ten West Division championship, and a berth in the Rose Bowl Game.

Blythe was named second-team All-Big Ten by coaches and media and third-team All-America by The Associated Press.

Iowa has now had at least one player drafted in every NFL Draft since 1978.

The Hawkeyes have a long history of success with the Colts. Since 2000, Dallas Clark, Bob Sanders, and Pat Angerer were drafted and starred in Indianapolis.

Blythe is the 59th player coached by Kirk Ferentz at the University of Iowa to be selected in the NFL Draft.