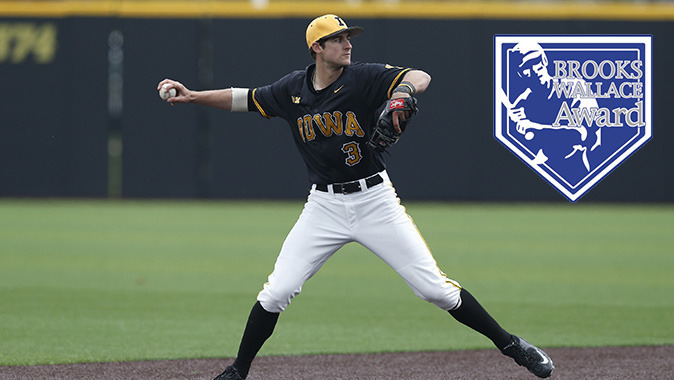 IOWA CITY, Iowa — University of Iowa senior Nick Roscetti has made the first cut for the Brooks Wallace Award Watch List, it was announced Thursday by the College Baseball Hall of Fame. The honor is given to the top shortstop in collegiate baseball.

Roscetti is one of 26 players remaining on the watch list that was trimmed from 54 players. He is one of two Big Ten Conference players on the list along with Minnesota’s Terrin Vavra.

The Sherman, Illinois, native is putting up career-best numbers across the board in 2016. Roscetti has started every game, where he is hitting .328 with a team-best 32 RBIs. He has 12 extra base hits — nine doubles and three home runs — and a team-best 22 multi-hit and 10 multi-RBI contests.

Defensively, Roscetti has committed just three errors in 201 chances for a .985 fielding percentage and has been part of 27 double plays. He’s a key cog in the middle of Iowa’s defense, which ranks 16th nationally in team fielding percentage.

The award, sponsored by Mizuno, will be presented as part of the annual Night of Champions celebration July 2 in Lubbock, Texas. For more information, visit www.collegebaseballhall.org.

The Hawkeyes close out their home schedule, hosting Michigan State for a three-game series from May 13-15 at Duane Banks Field.