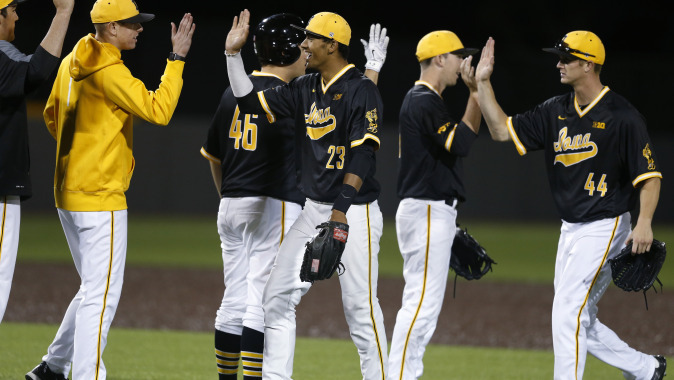 IOWA CITY, Iowa — With two Big Ten Conference series remaining in the regular season, the University of Iowa baseball team is fighting for its postseason life.

The Hawkeyes sit in 10th place in the league standings with an 8-10 record, two games behind Maryland, Ohio State, and Penn State; Illinois is ninth with a 9-9 record. The top eight teams advance to the 2016 Big Ten Tournament.

“We have to realize what we’re still playing for,” said senior Jimmy Frankos. “We know we’re fighting for our lives. We have to put our emotions aside, lock in, play our best baseball and try to go on a run.

“We don’t talk too much about the standings, but we know where we stand and what we have to do this weekend. That’s where our focus has to be.”

Iowa holds tiebreakers over Maryland and Illinois by virtue of series wins, but Ohio State holds the tiebreaker over Iowa after taking two of three games last weekend in Columbus, Ohio.

“It’s still a tight race,” said senior Nick Roscetti. “If we do what we are supposed to do this weekend, we’re right back in the mix. We need to take it one game at a time and know we aren’t out of it. We need to keep fighting.”

The Spartans are tied for fourth with an 11-7 Big Ten record and are 32-13 overall. Michigan State has dropped two of its last three conference series, both at home against Indiana and Nebraska with a road series victory over Michigan in between.

“Our ultimate goal is still in mind and we’re going to fight for our lives to get into the tournament,” said Frankos. “Once you’re there, anything can happen. We’re going to stay pitch-to-pitch and block out the outside distractions and play our best baseball. Hopefully the winning takes care of itself.”

The side-story this weekend will focus on the seniors. Thirteen players will compete at Duane Banks Field for the final time in their Hawkeye careers.

“It’s going to be emotional,” said senior Nick Roscetti. “I love playing for Iowa and with all the guys on our team. We are going to try to go out on the right note this weekend.”

“I have spent a lot of time at (Duane Banks Field), playing in front of some of the best fans,” said Frankos. “I am excited, nervous, and it’s bittersweet. We’ve had a good run and I am sad to see it come to an end, but I wouldn’t want to do it any other way.”

As freshmen in 2013, the seniors won 22 games before going through a coaching change. Since UI head coach Rick Heller took over, the program has undergone a transformation. The team won 30 games in 2014 before winning 41 games and advancing to an NCAA Regional last season.

“I am proud of the way we have stuck together and believed in each other,” said Roscetti. “We’ve enjoyed the ride together and we have been able to rely on each other. We’ve made friendships that will last a lifetime.”

“This group never wavered,” said Frankos. “We’ve seen the turnaround of Iowa baseball and we’re all proud to be part of it. Iowa baseball has a new culture and is heading in the right direction and I am proud of all of us for sticking to it, never giving up, and believing in each other that we could be a part of turning around this program.”