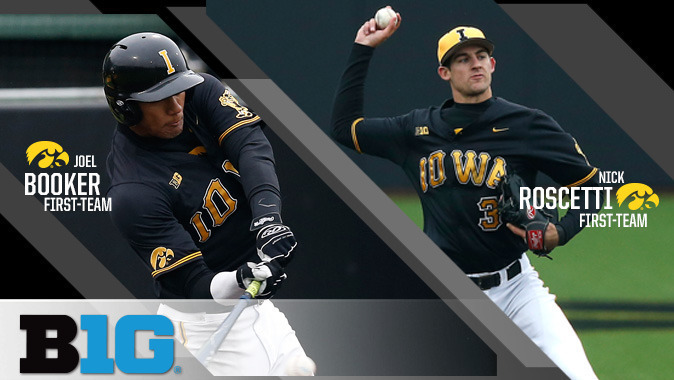 The Hawkeyes have had a first-team selection in three straight seasons for the first time since 2005-07 and Roscetti and Booker are the first Iowa duo to earn first-team recognition in the same season since Jason White (shortstop) and Travis Sweet (outfielder) in 2007.

Roscetti became the second Iowa shortstop in three seasons to earn first-team All-Big Ten honors, joining Jake Yacinich (2014). The Sherman, Illinois, native has been steady both offensively and defensively in 2016.

The 2015 third-team All-Big Ten selection has a team-leading 24 multi-hit and 11 multi RBI games. He is hitting .312 with 68 hits, 35 runs, and a team-best 37 RBIs, and has hit safely in 38 games. Defensively, Roscetti has committed just five errors in 229 chances for a .978 fielding percentage, and he has just three errors in his last 47 games.

Roscetti has made the cut for the Brooks Wallace Shortstop of the Year Watch List, as he is one of 26 players remaining for the honor presented to the top shortstop in collegiate baseball.

Booker has enjoyed a breakout senior season to become the first Hawkeye outfielder since 2009 (Ryan Durant) to earn first-team All-Big Ten honors. On the season, he is hitting .344 with 74 hits, 43 runs, and 32 RBIs and he has 24 extra base hits, including 17 doubles — tied for the eighth-most in school history.

The Columbus, North Carolina, native leads the team in virtually every offensive category and ranks in the top 10 in the Big Ten in seven different categories, including ranking third in steals (22) and fifth in doubles. He has 23 multi-hit games — the second most on the team — has hit safely in 40 games and has reached safely in all but five contests.

Booker is a semifinalist for the Gregg Olson Breakout Player of the Year Award, which is presented to a top amateur baseball player who elevates his game to an elite level throughout the season.

Senior Jimmy Frankos was tabbed as Iowa’s Big Ten Sportsmanship Award honoree. The distinction is presented to student-athletes who display sportsmanship and ethical behavior, are in good academic standing, and demonstrate good citizenship outside of athletics.