EAST LANSING, Mich. — University of Iowa senior Brandon Sorensen fell 2-0 in the 149-pound finals of the 2018 Big Ten Championships on Sunday afternoon at the Breslin Center. 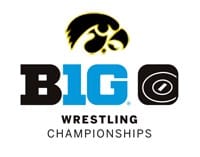 Zain Retherford, the top seed from Penn State, escaped in the third period and earned a point for riding time to hand Sorensen just his second loss of the season.

“It wasn’t the match I wanted,” Sorensen said. “If I’m going down I have to get out. That’s something I have to think about.”

Both of Sorensen’s losses this season have been to Retherford, which puts him in line to get the No. 2 seed at the upcoming NCAA Championships.

“I have to get ready mentally,” Sorensen said. “Work on bottom, quick finishes, short goes and high pace. It’s only a seven minute match and it goes by quick.”

The Big Ten Conference tournament is one of eight NCAA qualifying tournaments across the country. Iowa placed nine wrestlers on the award stand and all nine earned automatic berths at the national tournament in Cleveland, Ohio, on March 15-17. The Hawkeyes placed fourth overall with 90.5 points. Ohio State won the team title with 164.5 points.

“It’s a (national) qualifier and we have work to do regardless of where we ended up in each individual weight class,” said UI head coach Tom Brands. “I think we fell off, obviously. Our seeds didn’t hold in a lot of places, and we need to get there. We have to go forward. We have another tournament. It’s a three-day tournament in Cleveland, Ohio.”

Freshman Spencer Lee was named 2018 Big Ten Freshman of the Year. Lee is 18-2 overall this season. He was 6-0 in Big Ten duals and placed third at the conference tournament, registering on fall, one technical fall, and one major decision. He has scored bonus points in 14 of his 17 wins.

Lee and Vince Turk each finished their first conference tournament with a win Sunday afternoon. Lee recorded a 16-0 technical fall in three minutes, 14 seconds in his third-place bout at 125. Turk, who entered the tournament unseeded at 141, used two first-period takedowns to win 4-1 in the fifth-place bout.

Four Hawkeyes placed sixth Sunday – Michael Kemerer at 157, Alex Marinelli at 165, Joey Gunther at 174, and Cash Wilcke at 197. Kemerer and Wilcke both forfeited to sixth place. Sam Stoll placed fourth at 285.
We need to make adjustments in individual minds. We have to have guys fresh in their mind, and if something goes bad we have to be able to handle that a little better over a two-day, three-day period. Those are some of the things we need to iron out. It’s a fresh approach.”

The NCAA is expected to announce the tournament qualifiers Tuesday. The entire brackets will be released Wednesday.