Catching Up With Jason White

IOWA CITY, Iowa — The University of Iowa baseball program is “Catching Up” with former Hawkeyes. In the latest segment, the program reconnects with two-time All-Big Ten shortstop Jason White.

White, who played for the Hawkeyes from 2004-07, earned third-team All-Big Ten honors as a sophomore before being a first-team selection as a senior.  He hit 10 home runs and scored 70 runs in 2007 — the second-most in a single season in program history.

The Colorado native finished his career with 13 triples, which were tied for the fourth most in Iowa history.

White was selected in the 17th round of the 2007 MLB Draft by the Baltimore Orioles.

Get us up to speed. What are you doing these days and are you still involved with the game of baseball?
“My baseball career ended after tearing the labrum in my right shoulder, diving back into first base on an attempted pickoff. After having surgery and rehabbing my shoulder, it did not bounce back like i was hoping and was not able to keep playing. I then moved to Denver and enrolled in graduate school and got my MBA at the University of Colorado. I started a western Colorado produce distribution company (peaches, plums, pears, cherries, honey) that has done well, doubling in size the past four years. I still do get my baseball fix every spring; being the hitting coach for a local private high school, Kent Denver.”

How has COVID-19 effected your daily life, and what are you doing to keep busy/productive?
“Sarah, my wife, and I have been working from home during COVID-19. It is crazy to see how it has affected everyone differently no matter what business. Fortunately, I have been able to run my business at home without too many disruptions, other than PPE precautions and enhanced safety. Sarah runs the innovation sector for UCHealth, a system of hospitals across Colorado, and the workload has increased dramatically for her with COVID-19, setting up virtual visits, COVID on-site testing, and implementing all the new norms across a health system.

“A challenging part has been making sure our three daughters (ages 4, 2, 1) are staying engaged, active and continue to learn. We’ve gotten the older two to start to enjoy playing soccer, but usually it just ends with them picking dandelions and a juggling contest between Sarah and I. Luckily, we have a live in au-pair from Brazil who helps us take care of them so we can get actual work done.” 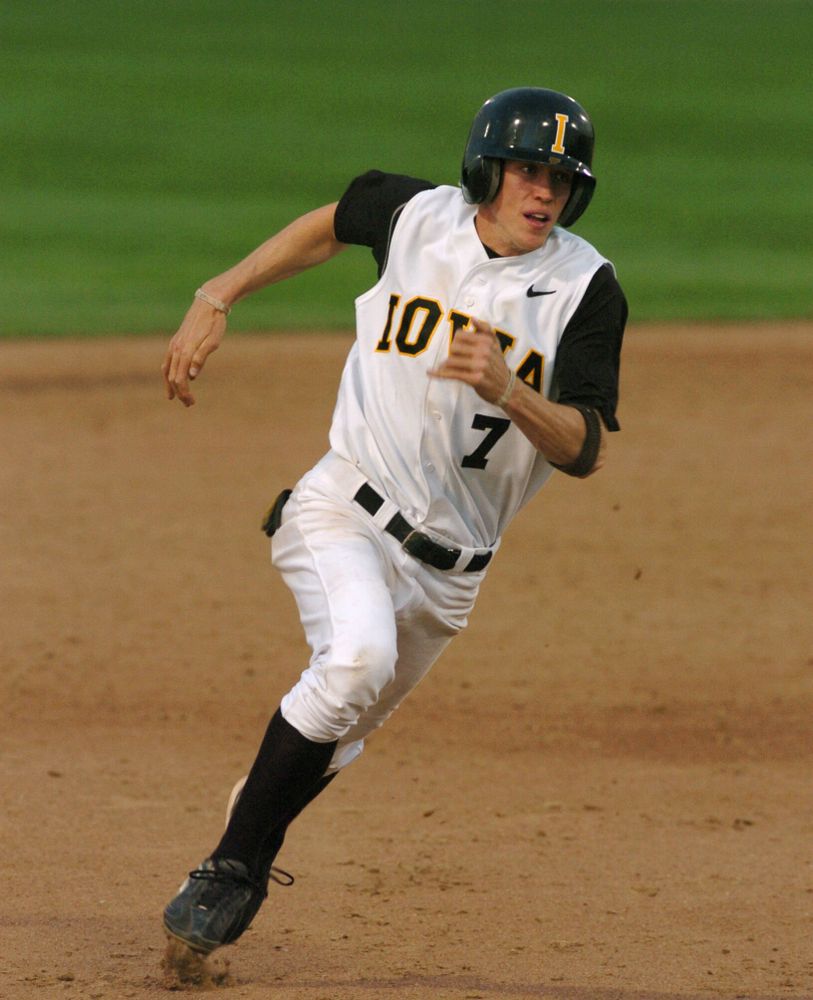 What was your favorite baseball memory as a Hawkeye?
“I have many great memories as a Hawkeye. However, probably my favorite was the Friday night game, my sophomore year in Ann Arbor. Coach Dahm and coach Brownlee had both been ejected from the game and we were getting smoked. We put together a massive comeback with a 10-run eighth inning to beat Michigan by one. It was a turning point in that season to propel us into the Big Ten Tournament. The atmosphere and intensity in the dugout was something I will always remember.”

What was your favorite non-baseball memory during your time at the University of Iowa?
“My favorite non-baseball memory comes from being a fan at the soccer stadium. I was dating a soccer player, Sarah Stephenson, who became my wife years later. Sitting on the grass berm at the stadium with a bunch of the baseball guys and heckling opposing teams was something I would look forward to.”

What do you remember most about playing baseball at Iowa?
“The bus rides, locker room jokes, and relationships between the guys on the team will always be something I’ll cherish. The hard work during the fall and terrible early morning weight sessions in the bubble have helped shape my work ethic. I’m proud to have been a small part of the Hawkeye baseball program. Go Hawks!”

“The bus rides, locker room jokes, and relationships between the guys on the team will always be something I'll cherish. The hard work during the fall and terrible early morning weight sessions in the bubble have helped shape my work ethic. I'm proud to have been a small part of the Hawkeye baseball program. Go Hawks!”

After getting drafted, what was your baseball life like in the minors?
“Life in the minors is a hard road. All baseball, all the time. I would go back in a second. The game teaches you to fight through adversity and pick yourself up. I met a lot of great players and awesome guys and am so fortunate to have lived out part of the dream I had as a kid. It’s an accomplishment not many get to achieve, and it’ll always make me happy being able to say I was a professional baseball player.”

In one weekend at home, you hit three home runs in one game and had an encore performance the next game with a cycle… what do you remember most about that weekend?

“At each level I played there was always a team that it seemed like the ball was bigger. Illinois was that team in college. That weekend was the kind you think about while playing wiffle ball in the backyard as a kid. We were not doing great in the Big Ten and that weekend helped us win 3-of-4 games and get us back into tournament contention.

“My parents had driven to Iowa City for the weekend and were sitting outside the left field fence with a few other parents having a tailgate-type picnic during the three-homer game. It was a great memory for them because two of the three home runs were opposite-field bombs and almost hit them. The cycle the next day started with an innocent drag bunt single to lead off the game. I didn’t think about hitting for the cycle until the last at-bat. That was one of the few at-bats where I tried to hit a home run, and it actually happened. Looking back, it was cool that the cycle happened in order from single, double, triple, home run. It was a weekend that I won’t forget anytime soon.”