IOWA CITY, Iowa — A 15-game sample was the extent of Peyton Williams’ freshman season with the University of Iowa baseball team. It was enough for the first baseman to showcase his potential.

Williams started all 15 games for a Hawkeye team that went 10-5 during the 2020 season. Batting in the middle of the lineup, Williams hit .298 with 16 RBIs and 13 runs to earn Collegiate Baseball Freshman All-America honors. His seven extra base hits included two home runs, four doubles, and one triple. He tied for fifth in the Big Ten in RBIs and was the top freshman run producer in the conference.

“Peyton was off to a great start,” said Iowa head coach Rick Heller. “He was giving us better at-bats every game, and that’s what we liked from Peyton from day one. He is a hitter that makes adjustments pitch-to-pitch and at-bat to at-bat, which is one of the keys to being a great hitter.

“What was evident to anyone who watched us play the first 15 games is how well he was adjusting to how teams were trying to attack him.”

Williams’ path to the starting lineup was what Heller envisioned when he received a verbal commitment from Williams as a sophomore at Johnston (Iowa) High School.

“We felt Peyton was the type of player that could come in and make an immediate impact in the middle of the lineup as a freshman and do a good job at first base,” said Heller. “He didn’t disappoint.”

Baseball has long been Williams’ favorite sport. He started when he was 5 or 6 years old when he played with older kids because his age group didn’t have organized baseball. His love for sports grew, thanks to his father, David. 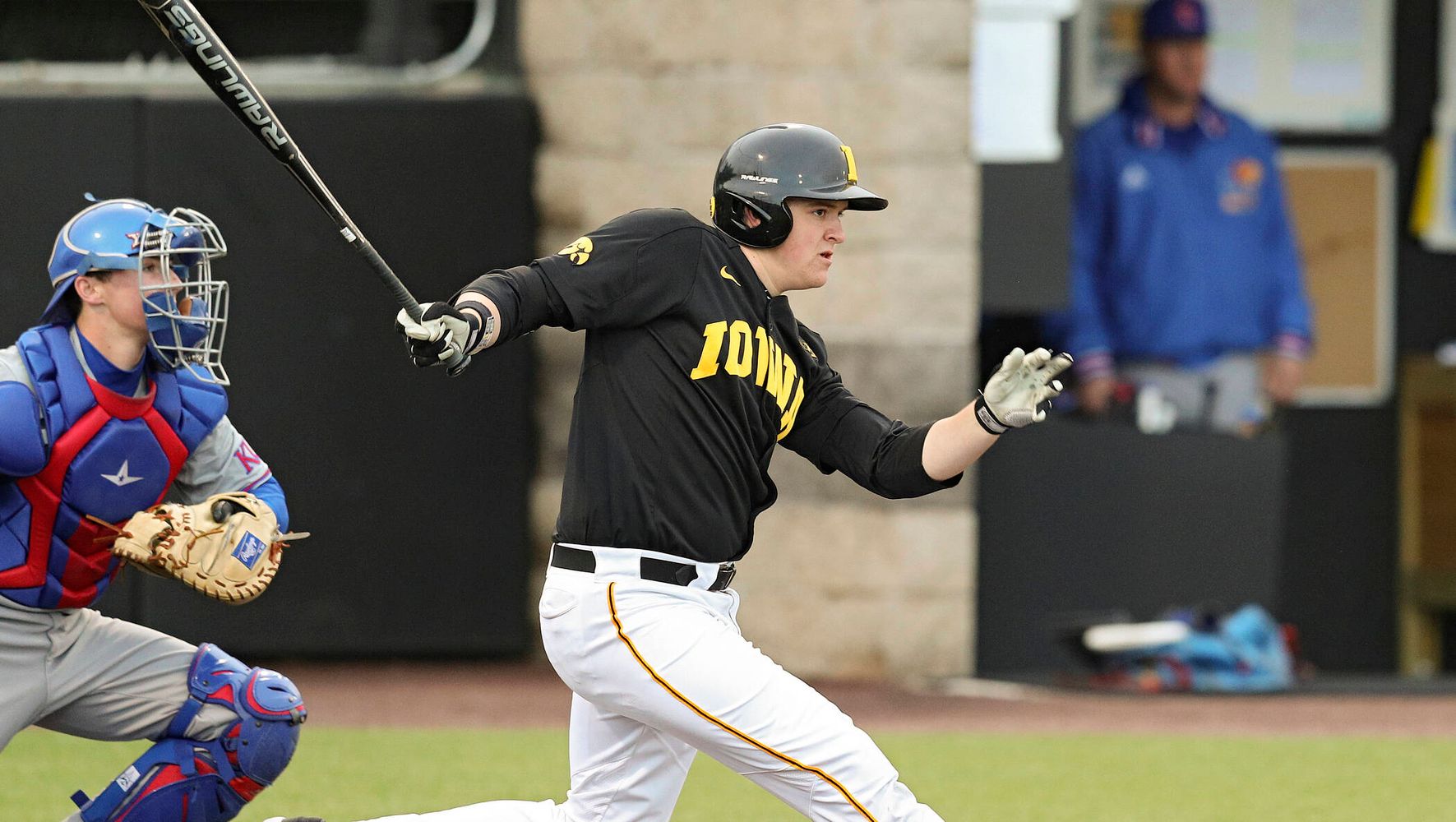 “No matter what it was, he was there with me outside shooting hoops or going to toss to me in a run-down batting cage where he got hit too many times,” said Williams. “He was always trying to help.”

Williams grew into a three-sport star at Johnston. He was a three-year starter in football, earning two second-team all-conference honors at tight end, and he was a two-time all-conference and a third-team all-state basketball player as a senior.

It was on the baseball diamond where Williams really made his mark. As a senior, he was the Iowa High School Baseball Coaches Association and Iowa Prep Baseball Report Player of the Year after hitting .473 with 17 doubles, 57 RBIs, and a state-best 16 home runs.

Williams finished his career as a two-time IHSBCA Super Team, three-time first-team all-state and all-district, and a four-time all-conference selection. He became the sixth player in 4A history to surpass 200 career hits and he finished his prep career as Johnston’s career leader in runs, hits, doubles, home runs, and RBIs.

“To commit a first baseman as a sophomore, you don’t see that a lot, but we felt he was special,” said Heller. “The fact he played three sports, we felt he would grow athletically. He is one of those kids like (former Hawkeye) Jake Adams, where he was hitting home runs at 9-10 years old.”

Williams used the football and basketball seasons to refine skills for baseball.

“They helped develop specific skills that sometimes baseball doesn’t focus on,” said Williams. “In basketball, you focus on quickness and defensively, you don’t focus on being quick in baseball, but developing that quickness in basketball helps when you’re playing defense.

“Football is a game where it takes mental toughness to power through small injuries and it takes a lot of strength. That translates over to baseball.”

Baseball came naturally to Williams, and he has a drive to be the best.

“(Baseball) is something I wanted to get better at,” said Williams. “It’s a sport that when you grow up in Iowa, you don’t get that much exposure because we play high school ball in the summer.

“I always wanted to make my name known and get out there. I wanted to get better so people had to notice me.”

It’s that drive that has Heller excited about Williams’ future.

“When you have that type of attitude to improve daily when you come to practice, the sky is the limit,” said Heller. “I wouldn’t put a cap on what Peyton can do in his career.”

Williams was riding an 11-game hitting streak when the Hawkeyes’ season was canceled on March 12 by the global coronavirus pandemic.

“It’s disappointing he didn’t get a chance to finish 56 games this year and go into the summer with a wooden bat and go through that experience,” said Heller. “That was the road map, it has changed, but I know he is going to put the work in.

“Peyton worked hard in the weight room on his body (this past year), was becoming more flexible, and he’s a big guy that can run. He will attack all those things equally, and when you get a guy like that, the sky is the limit.”

The Hawkeyes experienced success in Williams’ first 15 games, posting three wins against ranked opponents. He wants the team to use the 2020 successes and the disappointment of the lost season as a launching point toward 2021.

“I want our success to motivate us that it is possible to be that good,” said Williams.