Through uncertainty, inactivity, and quarantine, the native of Washington D.C., still had a timeline and a difficult decision to make about his future.

On one hand, the 6-foot-11 reigning national men’s basketball player of the year saw a lucrative contract playing overseas or in the National Basketball Association. On the other hand, there were hungry, driven teammates welcoming him back for a senior season where expectations are higher than they have been at Iowa since, well, maybe forever.

The hungry Hawkeyes, their coaches and fans won the Garza Lottery on Sunday when the Big Ten Player of the Year announced he would return to finish what he started as a freshman in 2017-18.

“It wasn’t about him,” McCaffery said. “It goes back simply to his role in that locker room, his relationship with his brothers on that team. That bond is why he ended up making the decision he made.

“The most important thing to him is his relationship with his teammates and that they all have a common goal, and that is to do something special.”

Garza phoned his father, Frank, on July 29 and together they arrived at a decision. Garza informed McCaffery two days later, his roommates Sunday morning, and the rest of the team later Sunday during a Zoom meeting before holding a news conference at 12:15 p.m. (CT).

“I had the right conversations with the right people,” Garza said. “If I would have left (for the NBA) assuming there would not be a college season and I had to watch the (Iowa) team play without me, I would have been upset and regretted that decision. Whatever happens, I made the right decision and I won’t regret it.”

Neither will his teammates. The Hawkeyes are coming off a 20-11 season and were poised for a lengthy postseason run when the season came to an abrupt end because of the coronavirus pandemic. The unfinished business factored into Garza’s decision, but ultimately it came down to people.

“I felt it would be funny if we did something and Luka was like, ‘Dude, you should do it,’” Connor McCaffery said. “That is why I did it, to get a little reaction… but I didn’t want to give anything away, either.” 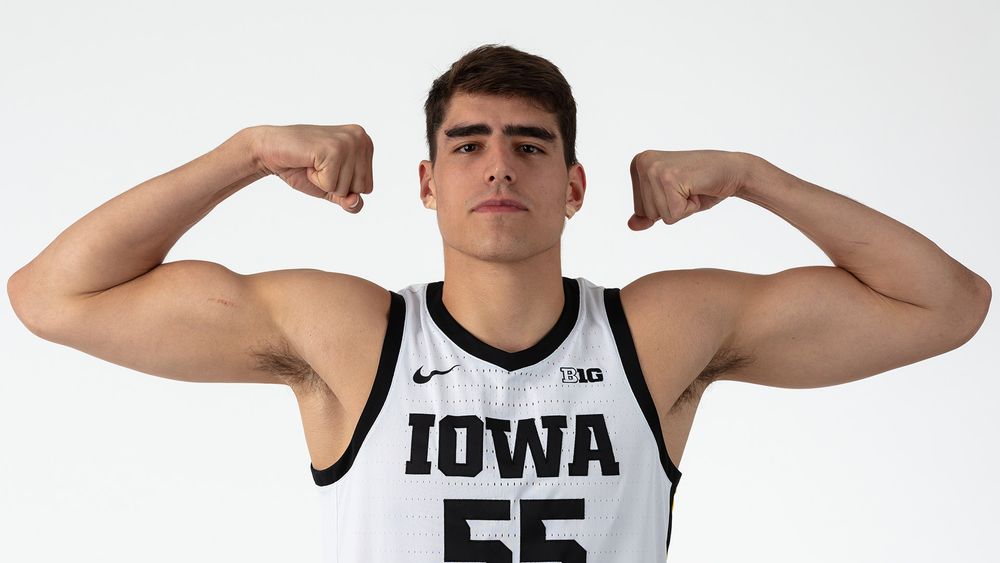 As a junior, Garza averaged 23.9 points and 9.8 rebounds per game while making 39 3-point field goals and shooting 54 percent from the field. He was named National College Basketball Player of the Year by six national news outlets.

“I’m excited to be back with my teammates and look toward winning a national championship and a Big Ten championship,” Garza said. “We have big goals in mind and once we get back on the court we are going to start working and hopefully we can make history this year.”

“It’s great news to hear,” said sophomore guard Joe Toussaint, who averaged 6.5 points and 2.9 assists in his first collegiate season. “We’re ready to get back to work.”

“Bringing Luka back brings a different dimension to our team,” said redshirt sophomore guard CJ Fredrick. “He was the most dominant player last year in college basketball, so if you bring that back we’re going to be excited.

“Everyone on the court will be able to score the ball so it will be hard to focus on one person, especially with Luka back.”

Junior Joe Weiskamp was second to Garza in team scoring a season ago at 14 points per game. He made a team-high 52 3-point field goals and played a team-high 32.6 minutes per game.

“It was huge news for us as well as the fans,” Wieskamp said. “Luka is such a big leader, not only on the court, but off the court he is constantly communicating with guys and motivating them to get in the gym.

“We are a veteran team, so it’s good to have his experience, leadership and presence in the locker room back. That is one of the most important things.”

Sophomore Jack Nunge played in just five games last season because of injury. Also 6-11, he has experience pounding and bumping with Garza in practice.

"(Luka) was the most dominant player last year in college basketball, so if you bring that back we’re going to be excited."

“Having Luka back is huge for our team,” Nunge said. “He is a great leader and I’m excited to be able to battle with him again.”

With the likes of Garza and Nunge on the inside, Hawkeye sharpshooters are salivating over the space they should have on the perimeter.

“If (opposing defenses) take away one thing, something else is going to open up,” Connor McCaffery said. “We already know nobody can guard Luka one-on-one, so as long as that stays true, there will be things open for us a lot of the time.”

The return of Garza creates headaches for opponents and headlines for the Hawkeyes. That’s what they signed up for, Connor McCaffery said.

Coming off back-to-back 20-win seasons and with the return of the best player in the nation, the Hawkeyes already hear a commotion that became louder Sunday afternoon.

“This is the most preseason buzz any Iowa team has had,” Garza said. “That doesn’t mean anything until we step on the court and prove what people are saying.”

And that makes the last five months feel a little less weird.