IOWA CITY, Iowa —The temperature was in the 30s on Tuesday, chilly for Iowans and probably downright cold for someone from Southlake, Texas.

But freshman Kristopher Joseph Hogan II was putting in overtime with a wide receiver after practice, working on footwork and the timing that is so crucial between quarterback and receiver. Hogan, who goes by Deuce, is perhaps the best-known member of Iowa’s Swarm 2020 recruiting class because of the way he used social media to unite and recruit other Hawkeyes.

“You have the opportunity to make connections before you had an opportunity to meet these people in person,” Hogan said. “It is one of the benefits of social media, being able to reach out to guys in my class. My goal was to make Hawkeye football as good as it could be when I got here and for the next four years. As soon as I committed, I felt it was my role to get as many people to come with me as possible.”

Iowa head coach Kirk Ferentz said it is smart for a quarterback to surround himself with good teammates.

“He was a catalyst and was actively recruiting other guys and recruiting them to recruit other people, too,” Ferentz said. “He was aggressive in that regard and it helped us put a good class together.” 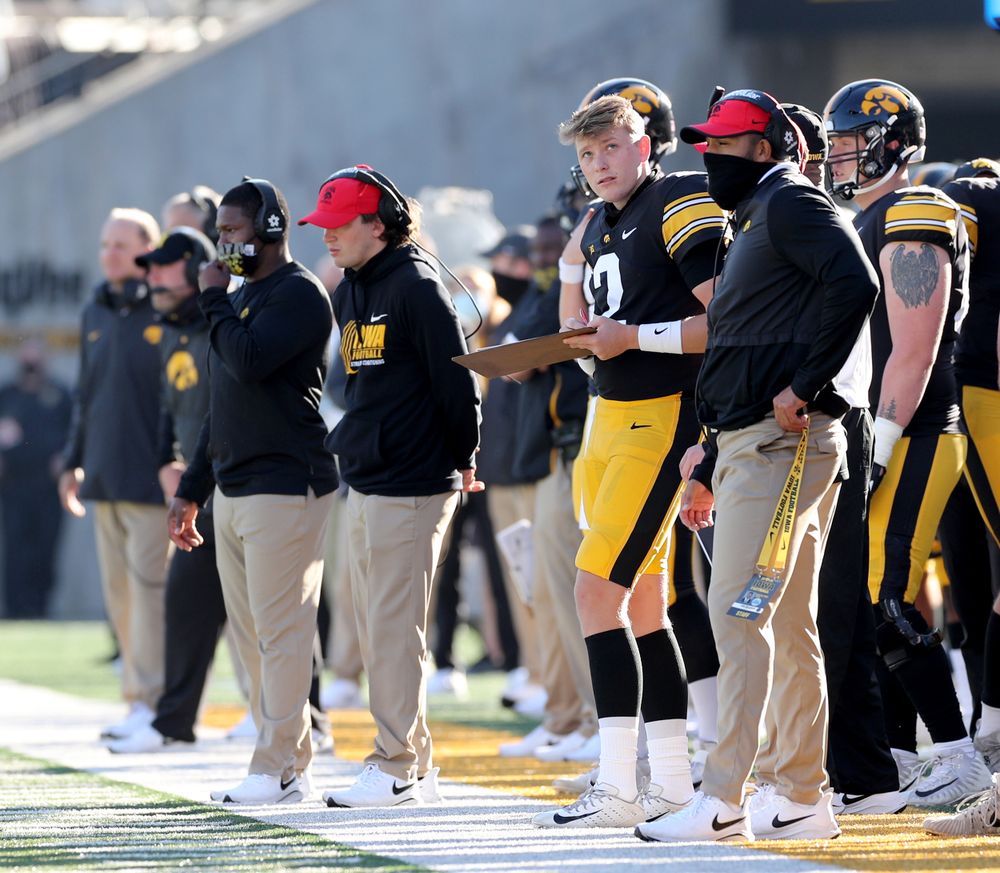 “I want to be everything I can for Iowa football. If that is playing scout team quarterback and getting them ready to play their next opponent or if that is being the guy, whatever it is that I can help this program.”

Six months into the process and Ferentz is thrilled with the true freshmen.

“They look like a good group,” he said. “They like football, have been attentive and have shown us good things on the practice field.”

Hogan was a three-time captain at Faith Christian High School in Grapevine, Texas, where his father was head coach. He led the Lions to the Texas Association of Private and Parochial Schools state playoffs four seasons, winning a championship in 2016.

The leap from TAPP to B1G is significant.

“It is a mental game here, which is fun,” Hogan said. “It’s like a massive puzzle and we’re always playing a game of chess against their DC (defensive coordinator). That’s the biggest change from high school — it’s a lot of thinking, a lot of what’s going on pre-snap.”

During a typical practice week, Hogan bounces between working with the regular offense to directing the scout team. He completes a walk-through with Iowa’s offense, then moves to scout team where his job is to give the Hawkeye defense a game-like look.

“I want to be everything I can for Iowa football,” Hogan said. “If that is playing scout team quarterback and getting them ready to play their next opponent or if that is being the guy, whatever it is that I can help this program.”

Ferentz complimented Hogan’s attitude, saying players are drawn to him.

“It is a big adjustment; (quarterback) is the hardest position to play as far as decision-making,” Ferentz said. “He has been learning every day. I’m pleased he is in the program.”

Hogan calls traveling to road games a “business trip” and an “awesome experience.”

“It’s all business and the fun is to be had after we win the game,” Hogan said. “We are locked in from the time we are eating our meal or getting on the plane. It’s a 1 percent thing I get to experience.”

Iowa looks to extend its winning streak to three games Saturday when it takes on Penn State in University Park, Pennsylvania. Kickoff is 2:30 p.m. (CT) and the game will be televised by BTN.