Blythe, Wirfs learned to be pros long before the NFL

IOWA CITY, Iowa —Monday Night Football featuring the Los Angeles Rams and Tampa Bay Buccaneers reminds Austin Blythe of any game the University of Iowa played in the latter half of the 2015 season.

For Tristan Wirfs, it is like one of those highly awaited Wisconsin-Iowa matchups between storied Big Ten programs that flaunt their offensive lines.

Blythe, 28, grew up in Williamsburg, Iowa, less than 30 miles west of Iowa City; Wirfs, 21, was raised in Mount Vernon, less than 30 miles north of Iowa City. Both of their high schools were members of the Eastern Iowa Hawkeye Conference, both Blythe (2009-10-11) and Wirfs (2017) were state wrestling champions. Heavyweight, of course.

Both played in three bowl games as Hawkeyes. It is the Iowa football link that solidly binds them.

“It’s cool seeing how close guys are even after we are done with our time at Iowa,” Wirfs said.

“No matter whether you crossed over with them as teammates, you have a bond because you played there and you know what that means,” Blythe said. “That is the same with Tristan — I didn’t play with him, but being from Iowa, we know what we’re about.” 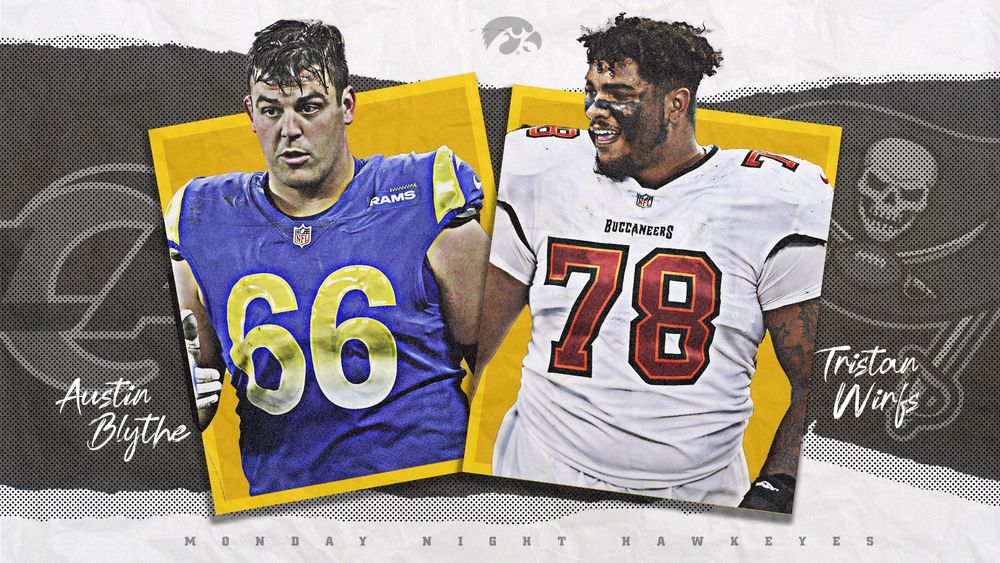 “Both are good football players and team members. I’m happy for both of them; they are playing for good organizations, on good teams and helping those teams get better.”

“We were rolling with an undefeated season and every game carried a big weight to keep winning,” Blythe said. “In the Big Ten, you need to win every game to have a chance to get into the College Football Playoff. Unfortunately, we didn’t win the Big Ten Championship, but it reminds me of this game coming up. It is a must win for both teams and it will be a good atmosphere in Tampa Bay’s stadium.”

“That’s a good illustration that it doesn’t matter how you get to the NFL, it’s about what you do when you get there,” Ferentz said.

Though they were never teammates, Blythe and Wirfs became familiar with each other when Blythe returned to the Stew and Lenore Hansen Football Performance Center to train in the offseason.

“I would have loved to have been at Iowa the same time as Blythe,” Wirfs said. “He has a good resume. I knew him because of his high school wrestling background, and I watched him play at Iowa when I was getting recruited. He is a pretty awesome guy.”

“What stands out about Tristan are his physical gifts and how he plays with them,” Blythe said. “He uses them to his advantage and that has carried over to the NFL. He is playing very, very well.”

It’s no surprise Blythe and Wirfs are thriving as professionals. Both say the NFL is simply an extension of what they were taught at Iowa under Ferentz.

“You learn how to be a pro in college,” Blythe said. “That’s what the Iowa program is about, being detailed with whatever you’re doing, being disciplined, and giving 100 percent effort. Guys from Iowa are prepared to do well and play well and I think you’re seeing that with the ones who are in the league today.”

Wirfs said there is another reason he is having a memorable rookie season. It has to do with perfecting technique over and over in college.

The Hawkeye offensive linemen left their mark on the program. Blythe still holds the pro agility performance record for centers, running 4.21 seconds in 2015; Wirfs set the hang clean record of 500 pounds in 2019. They both earned the Iron Hawk Award presented to the Iowa student-athlete who maximized physical potential on the field through dedication to strength and conditioning.

“Tristan has settled right in, done a great job, (Tampa Bay is) very complimentary of the work he has done and the way he has been playing,” Ferentz said. “You look at the career Austin has had and his position flexibility has helped. He has played excellent football at guard and now he is playing excellent at center.

“Both are good football players and team members. I’m happy for both of them; they are playing for good organizations, on good teams and helping those teams get better.”

There are currently 36 Hawkeyes with NFL teams. Two others will be involved Monday: Anthony Nelson plays for the Buccaneers, Jake Gervase is on the practice squad for the Rams.

Los Angeles plays at Tampa Bay on Nov. 23 beginning at 7:15 p.m. (CT). Tune to ESPN and watch the Hawkeyes on display.