IOWA CITY, Iowa — One way to explain dominance is hearing zero dissention after announcing a most dominant award.

That was the case for University of Iowa senior Spencer Lee, who on the last day of March, was named winner of the 2020 WIN Magazine/Culture House Dan Hodge Trophy, presented by ASICS. The trophy is an annual recognition of the most dominant college wrestler. Lee accepted the trophy Jan. 5 at a news conference in the press box at Kinnick Stadium.

“There is no controversy on who the Hodge Trophy winner was in 2020. That shows the dominance,” said Iowa head coach Tom Brands. “In other years there have been times where somebody feels they were left out. This one was without a doubt.”

Lee finished the pandemic-shortened 2019-20 season with a record of 18-0 at 125 pounds. He was named Big Ten Wrestler of the Year after winning his first Big Ten championship with a fall, technical fall and 16-2 major decision in the finals. For the season, Lee scored bonus points in 17 of 18 matches and outscored opponents, 234-18.

Lee is the third Hawkeye to win the award, joining Mark Ironside in 1998 and Brent Metcalf in 2008.

“You are walking in hallowed footsteps,” said Mike Chapman, founder of WIN Magazine who created the trophy in 1995. “You are one of three Hawkeyes in the greatest sports program I have seen in my 50 years of sports journalism.” 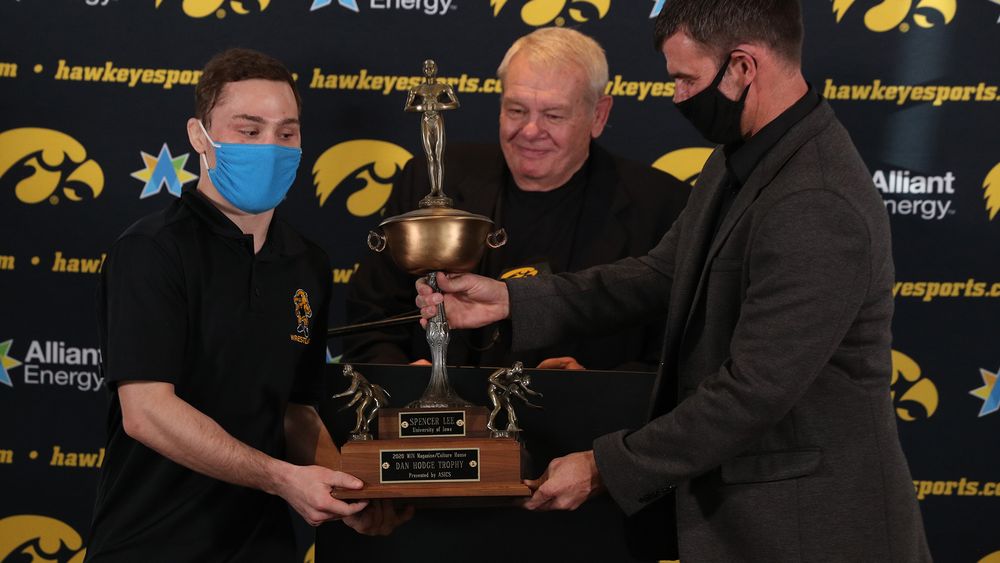 “There is no controversy on who the Hodge Trophy winner was in 2020. That shows the dominance. In other years there have been times where somebody feels they were left out. This one was without a doubt.”

Lee mentioned a photograph he had taken with Hodge when he was competing as an elementary student-athlete at a tournament in Oklahoma. Last fall, Hodge autographed a copy of Sports Illustrated for Lee. Hodge passed away Dec. 24, 2020, at the age of 88.

“Spencer had the distinction of being the last Dan Hodge Trophy winner while Dan was still alive,” Chapman said. “Believe me, Dan Hodge knew who Spencer Lee was. The last time I talked to him I told him Spencer had won it and he said, ‘What a great choice.’”

Winning the Hodge Trophy without winning a national championship in the same season is an asterisk that doesn’t sit quite right with Lee. He said winning his third national title and second Hodge Trophy in 2021 would be more fulfilling.

As a young wrestler, Lee said his primary motivation was winning four national titles. He looked up to other Hodge winners like Ironside as well as Dan Gable, who graduated 25 years before the Hodge Trophy was created.

“Dan Gable and Ironside are idols to me because of the way they wrestled,” Lee said. “They were physical and ran people off the mat, that Iowa style that Gable instilled in his athletes. I like to put a lot of points on the board and I do it a different way.”

If Lee repeats in 2021, he will be the fourth wrestler to win multiple times. The others are Cael Sanderson (2000-02), Ben Askren (2006-07) and Zain Retherford (2017-18). He is in elite company having won both the Hodge Trophy and the AAU James E. Sullivan Award presented to the most outstanding amateur athlete in the United States. Lee won the Sullivan Award on April 30.

“It was an honor to be nominated,” Lee said. “I’m humbled to have won.”