Murin Adds Pop to His Horsepower

IOWA CITY, Iowa — There was a lot to like when the Hawkeye Wrestling Club hosted the Showdown Open on Nov. 1. Spencer Lee won by fall and Jaydin Eierman knocked off an Olympic champion.

But there was another match that stood out to University of Iowa wrestling coach Tom Brands. At 150 pounds, Iowa’s Max Murin defeated Mitch McKee of Minnesota, 4-2. The two split two matches at 141 pounds in 2019-20.

“We saw (Murin) Nov. 1 and I liked that match,” Brands said. “That match fired me up. As far as the weight class change, what we saw was an attacking Max Murin. He is attacking, he has strong attacks, he has a lot of pop.”

Last season, Murin won his first 10 matches and went 16-3 competing at 141 pounds. In the offseason he had what he called an easy conversation with Eierman, a transfer from Missouri who is already a three-time All-American at 141.

Brands said Murin had horsepower at 141. At 149, he has horsepower with pop. To prepare from heavier foes, Murin spent the summer practicing against 157-pounder Kaleb Young and 165-pounders Alex Marinelli and Jeremiah Moody. 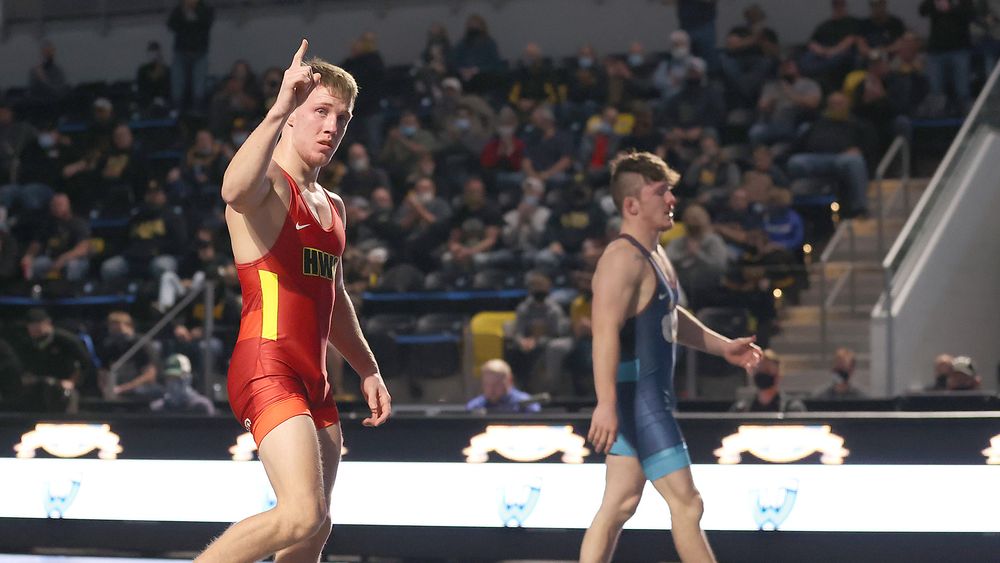 “I was trying to get used to wrestling bigger guys,” Murin said. “It is always fun wrestling new guys in the room and getting that experience.”

Murin felt well and performed well at 141; he feels even better carrying the additional eight pounds. Last season he felt himself getting bigger, so it seemed natural for Murin to slide into the 149 vacancy created by the graduation of Pat Lugo, the defending Big Ten champion.

In the season opener Jan. 15, Murin, ranked eighth in the nation, defeated No. 20 Brock Hardy of Nebraska, 6-2. The top ranked Hawkeyes will be back on the mat Friday at No. 15 Minnesota. Murin’s opponent will be either Iowa native Michael Blockhus or Jake Bergeland. Blockhus is ranked No. 17 in the country.

“I feel this is a great opportunity to show how good I can be and score as many points as I can every match,” Murin said. “I think it is going to show at the end of the year.”

The Iowa-Minnesota dual, which will be televised on BTN, begins at 8 p.m. (CT).