THIS WEEK
The University of Iowa baseball team heads to Minneapolis for four games at U.S. Bank Stadium. The Hawkeyes will play Ohio State at 11 a.m. (CT) Friday, Nebraska at 9 a.m. and Ohio State at 1 p.m. Saturday and Nebraska at 2 p.m. Sunday. There will be no general fan admittance because of the coronavirus pandemic.

WATCH/LISTEN LIVE
• All four games will be streamed live via BTN+, a paid subscription service.
• The duration of the four-game series will be available on the Hawkeye Radio Network with Jonathan Rawson on the call. Fans can access the stream via TuneIn Radio.
• Fans can follow along for live updates via Twitter/@UIBaseball.

LEADING OFF
• Iowa will play two games, alternating between Ohio State and Nebraska March 12-14 at U.S. Bank Stadium in Minneapolis.
• The Hawkeyes dropped three of four games against No. 18/21 Michigan last weekend in Round Rock, Texas. Iowa’s lone victory came in the seven-inning contest on March 7.
• Senior Austin Martin was named to the Buster Posey Award Watch List on March 9. He is one of four players in the Big Ten and 69 players nationally named to the watch list for an award presented to the top catcher in collegiate baseball.
• The Hawkeyes ripped 11 doubles in fours games against the Wolverines. The 11 two-baggers are tied for the second most in the Big Ten this season.
• Friday night starter Trenton Wallace threw a career-high five innings and fanned a career-best eight batters in his first career weekend start — a no decision — on March 6 against No. 18/21 Michigan.
• Iowa is projected to finish fourth in the Big Ten Preseason Coaches Poll and fifth in the Big Ten Conference standings by D1Baseball.com in 2021.
• Iowa returns 27 letterwinners, including all nine positional starters and its designated hitter from the 2020 season, including Perfect Game preseason All-Big Ten selection Izaya Fullard.
• Martin along with Ben Norman and Trenton Wallace have been named to the Big Ten Players to Watch List.
• Senior Grant Leonard enters the 2021 season with 20 career saves — three saves away from breaking Kurt Belger’s (22 saves, 1993-97) career saves record.

HAWKEYE NOTABLES
• Senior Matthew Sosa hit safely in all four games, batting .500 with three doubles and five RBIs against No. 18/21 Michigan. Sosa slashed .500/.750/.571 on the opening weekend.
• Redshirt freshman Peyton Williams brings a 15-game reached base streak into Minneapolis dating back to last season.
• Redshirt junior Trenton Wallace was Iowa’s opening day starting pitcher and he hit for himself against No. 17/21 Michigan.
• Iowa punched out 38 batters in four games, averaging 9.5 strikeouts per game, but the Hawkeye pitchers allowed too many free bases. Iowa had 28 walks — seven per game — against Michigan.
• Seven Hawkeye freshmen made their debuts last weekend in Texas. They were: Michael Seegers, Andy Nelson, Anthony Mangano, Will Semb, Ty Langenberg, Jackson Payne, and Tyson James.
• Iowa will play a 44-game Big Ten only schedule in 2021 because of the global coronavirus pandemic. That includes 16 games at Duane Banks Field.

ROTATION INTACT
The Hawkeyes will roll out the same starting rotation for a second straight weekend.
• Junior Trenton Wallace went a career-high five innings and fanned a career-high eight in the series opener against No. 18/21 Michigan, but the southpaw threw 95 pitches in those five innings.
• Redshirt sophomore Drew Irvine tossed three shutout innings against the Wolverines before surrendering three runs in the fourth. Irvine had four strikeouts, but walked five, in his first career start.
• Redshirt junior Cam Baumann (0-1) surrendered a pair of home runs in three innings against Michigan. Six of his nine outs in the game came via the strikeout.
• Sophomore Duncan Davitt gave up four runs on six hits over 3 1/3 innings against Michigan, but wasn’t involved in the decision. He had four strikeouts to one walk. 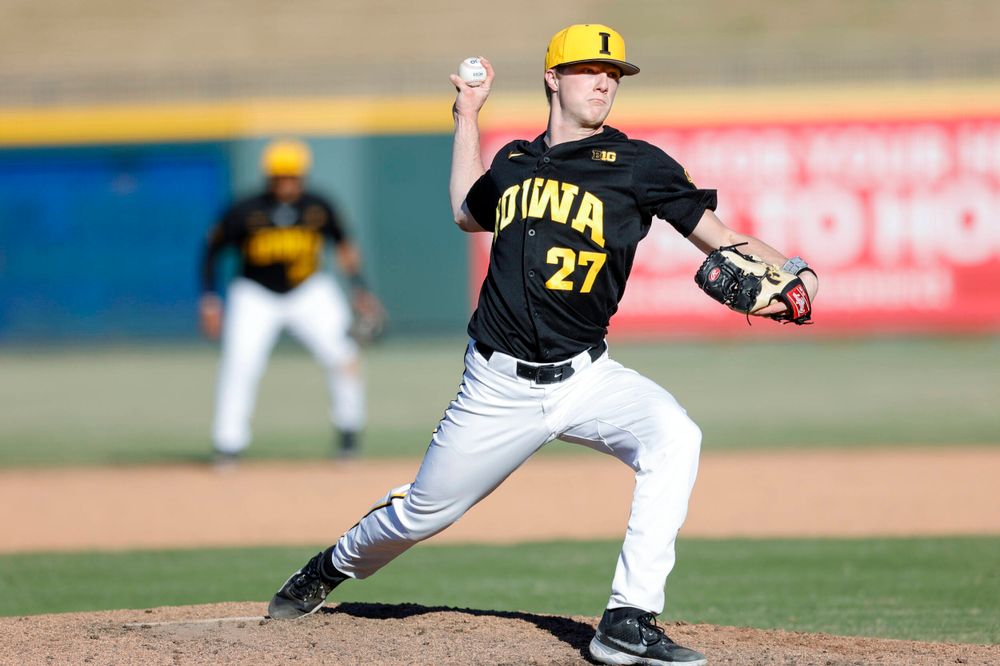 SCHEDULE QUIRK
After playing Nebraska twice this weekend in Minneapolis, the Hawkeyes will welcome the Cornhuskers to Iowa City from March 19-21 for a traditional three-game series.

SCOUTING OHIO STATE
• The Buckeyes won three of four games against Illinois last weekend in Greensville, South Carolina. Ohio State won the first three games before falling in the finale.
• Ohio State is hitting .267 as a team with six doubles, two triples, and two home runs. Four players are hitting over .300 with Kade Kern leading the way with a .471 average.
• The Buckeyes will start LHP Seth Lonsway (0-0, 16.88 ERA) in game one and RHP Jack Neely (1-0, 9.00) in game three. Lonsway is a potential first round MLB Draft pick.

SERIES RECORD
• Ohio State leads the all-time series 86-78-1. Iowa won the past two series over Ohio State, winning two of three games in Iowa City in 2018 and two of three in Columbus in 2019. The Buckeyes eliminated the Hawkeyes from the 2018 Big Ten Tournament.

SCOUTING NEBRASKA
• The Huskers opened the 2021 season by going 3-1 in four games against Purdue in Round Rock, Texas. Nebraska lost the series opener before reeling off three straight wins to take the series.
• Nebraska is hitting .302 as a team with four doubles and five home runs. Freshman Max Anderson hit .533 and slugged .800 during the opening weekend.
• Iowa will face RHP Chance Hroch (1-0, 3.00) and LHP Jake Bunz (0-0, 0.00 ERA) this weekend.

SERIES RECORD
• Iowa leads the all-time series 22-21. The Hawkeyes are 13-9 against the Huskers since Nebraska joined the Big Ten. Iowa won two of three game over the 30th-ranked Huskers in Iowa City in 2019 before Nebraska downed Iowa in the second game of the Big Ten Tournament.