THIS WEEK
The University of Iowa soccer team hosts No. 9 Penn State at 4 p.m. (CT) on Thursday at the Iowa Soccer Complex.  The Hawkeyes will then host Purdue on March 28 in their home finale at 1 p.m.  It will be Senior Day on Sunday.

LAST GAME
Iowa defeated Maryland, 1-0, on a golden goal from sophomore Gianna Gourley. Freshman goalkeeper Macy Enneking made her starting debut against the Terps, coming up with three second half saves to force overtime. In the first period of extra time, Gourley fired a shot just below the crossbar that made its way in for the score through contact from Maryland goalkeeper Kennedy Tolson. 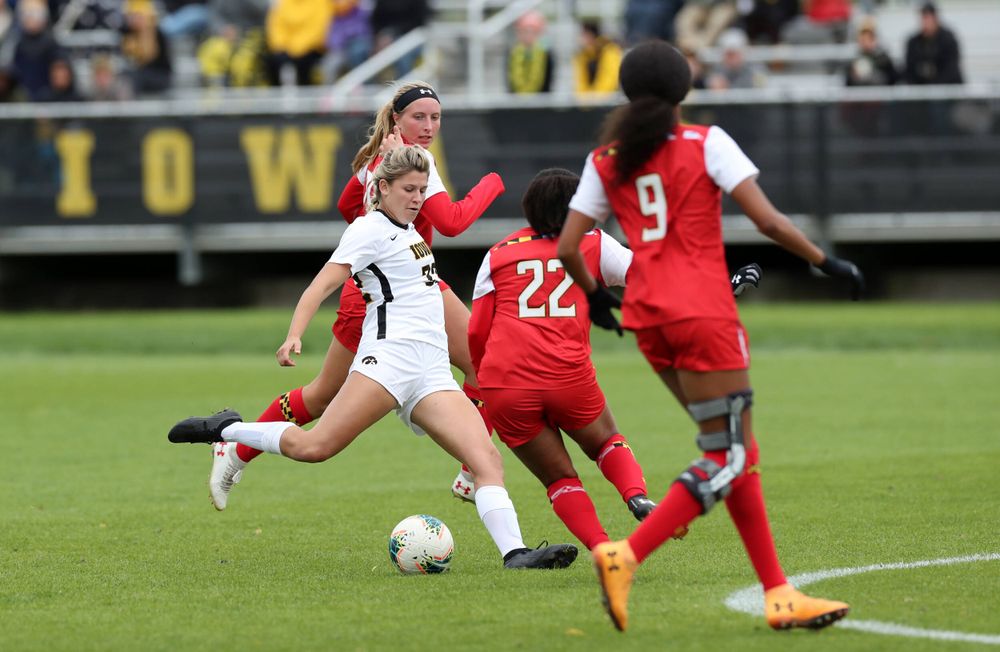 ENNEKING HONORS
Freshman Macy Enneking earned her first career Big Ten honor, being named the league’s Freshman of the Week on March 22 after posting a shutout at Maryland in her first collegiate start. The Hilliard, Ohio, native faced nine shots and made three saves over 97:03 minutes to give Iowa its first win of the season.

MONKEY OFF BACK
After being shut out for the first six games of the season, junior Sara Wheaton scored on a penalty kick in Iowa’s road loss at Rutgers on March 18.  It was the Hawkeyes’ first goal of the season and the third career strike for Wheaton.

FRESHMEN STRONG
Six Hawkeye freshmen — Aleisha Ganief, Meike Ingles, Rielee Fetty, Jalyn Mosley, Maggie Johnston, and Macy Enneking — have all started games this season.  Fetty has started a freshman-high seven contests, while Johnston has started six games. Ingles and Ganief have each started five contests and Mosley has been in the starting 11 three times.   Enneking made her first collegiate start at Maryland.

GETTING CHANCES
The Hawkeyes have out-shot their opponents in four of their six losses this season. Junior Hailey Rydberg (21) and freshman Meike Ingles (13) have combined for 34 of Iowa’s 80 shot attempts.

UP NEXT
Iowa returns to action April 3, traveling to Lincoln, Nebraska, to face the Cornhuskers at 1 p.m. (CT).