The Hawkeyes have won consecutive games for the first time this season and improve to 6-8 overall. Iowa beat Ohio State, 5-1, in game one Saturday.

“We competed all day,” said head coach Rick Heller. “We didn’t stop competing today and kept at it and got a few key knocks. The pitching and defense were good behind it. Overall, it was 18 innings of good baseball and it was the first time we’ve done that this year. It was good to see.”

With the game tied at four, redshirt junior Izaya Fullard got Iowa’s rally going in the ninth with a one-out double to left field. With two outs, Maryland went to lefty Ryan Ramsey to face Adreon and on a 1-2 count, the Pleasantville, Iowa, native connected on a two-run shot to left centerfield to give Iowa the 6-4 lead.

“There were big home runs in each game from Norman and Peyton’s and the big one was the left-on-left, opposite field home run from Zeb,” said Heller. “That came off a really good arm.”

The Hawkeyes went to redshirt junior Dylan Nedved in the ninth, and the dual-role Hawkeye pitched around a leadoff walk and a hit by pitch to convert his second save of the day and fourth of the season.

Iowa jumped out to a 1-0 lead in the fourth on a Ben Norman solo home run to centerfield and the Hawkeyes pushed their lead to 2-0 on an RBI groundout from redshirt freshman Tyler Snep in the sixth.

Maryland spoiled Iowa starter Drew Irvine’s strong start in the bottom half. After a single and walk, Irvine got Benjamin Cowles to hit a pop fly to shallow right center with two outs, but the ball fell in no man’s land for a two-run double to tie the game.

The inning ended Irvine’s day, one where the right-hander scattered three hits and allowed two earned runs over six innings. Irvine had five strikeouts to three walks in the no-decision.

Maryland again tied the game in the eighth when Bednar welcomed reliever Trace Hoffman (1-0) with a solo home run to lead off the inning.

Iowa had 10 hits with four Hawkeyes collecting multiple hit games. Fullard finished 3-for-4 with a double and run scored for his first three-hit game of the season, while Norman, Williams, and Adreon had two-hit games. Williams and Adreon each had two RBIs.

Maryland starter Sean Burke allowed two runs (one earned) on five hits over six innings. He struck out 11 without walking a batter. 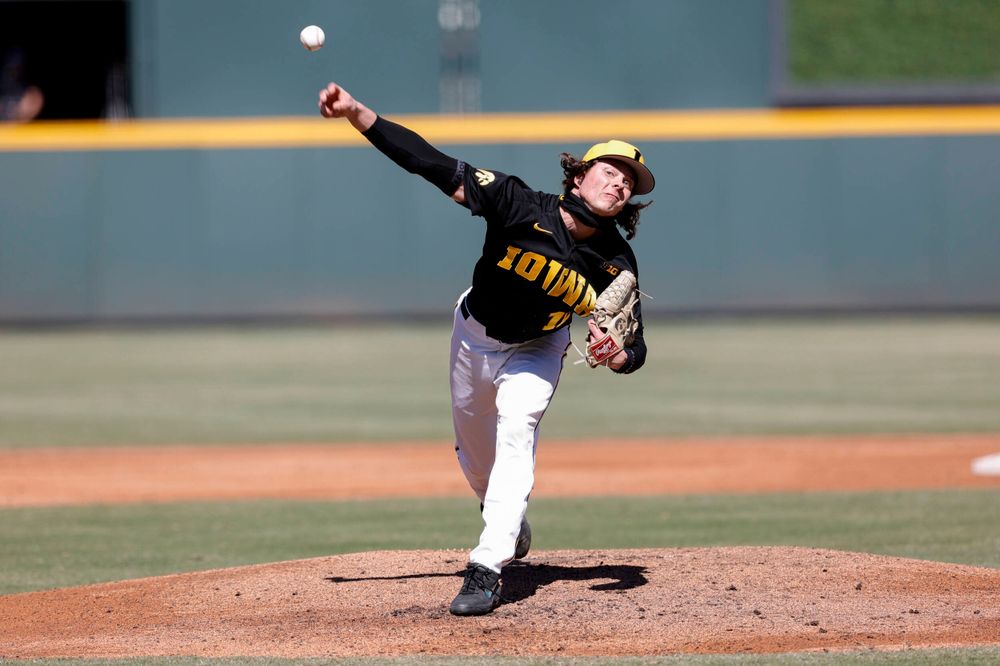 QUOTING HEAD COACH RICK HELLER
“When you’re in this pod situation, someone draws the short stick and it happened to be us in this one where you have to face Ohio State’s No. 1 and No. 2 and Maryland’s No. 1 and 2.

“We’re seeing some of the top arms out there. The Burke kid today from Maryland is as good of an arm as we’ve seen, and I think he’ll pitch in the Major Leagues. It is a tough scenario, especially after the rough start last night.

“To get starts from Cam – possibly the best start of his career – then Drew Irvine to go out against a scary power team like Maryland that can hurt you one through nine with the long ball, he gave us a tremendous start.

“For the first time in a long time, the guys kept playing and grinding at-bats out. They didn’t let the failures early affect the next pitch and consequently the game came back to us. That was impressive and it was a great overall team win for us and throw in the fact that the bullpen did a nice job and got two saves. I couldn’t be prouder of our team in how we competed today.”

OF NOTE
– The Hawkeyes finished with 10 hits – their fourth game with 10 or more hits this season.
– Norman has homered in consecutive games and he has five home runs over his last seven contests.
– Williams’ blast was his first of the season and third of his career.
– Irvine pitched a career-long six innings and he rebounded from a rocky start March 20 against Nebraska (6 R, 2 1/3 innings).