COLUMBUS, Ohio – The University of Iowa baseball team’s winning streak is up to a season-best three games after a dominant 11-2 victory over Maryland in its weekend finale at Bill Davis Stadium.

The Hawkeyes used an eight-run sixth inning to score a season-high 11 runs and improve to 7-8 four weekends into the season.

“Today was a big step for us as we had 18 innings yesterday, everything went great and we played hard, but we followed it up with a quick turnaround on a cold, blustery day with the wind blowing,” said head coach Rick Heller. “We showed a lot of toughness in all facets of the game.”

With Iowa clinging to a 2-1 lead, eight of Iowa’s first nine batters reached in the bottom of the sixth to blow the game open. Redshirt freshman outfielder Brayden Frazier singled home redshirt junior Izaya Fullard and redshirt freshman Tyler Snep for Frazier’s second and third RBIs of the day, giving Iowa a 4-1 lead.

After a Maryland pitching change with one out, redshirt junior Dylan Nedved and redshirt senior Ben Norman drew back-to-back walks to bring home another Hawkeye run.

Redshirt senior Matthew Sosa, who homered in the first inning and went 3-for-5 with three runs and three RBIs, drove in two more Iowa runs on a double to right center. Redshirt freshman Peyton Williams delivered the knockout punch with his second home run in as many days.

Williams’ three-run homer capped Iowa’s eight-run sixth inning to give the Hawkeyes a 10-1 advantage. Williams added an RBI single in the eighth inning to tally a career-high four RBIs.

Redshirt sophomore starting pitcher Duncan Davitt (2-1) quieted the Maryland offense over the first six innings. The Terrapins capitalized on a Davitt walk and hit-by-pitch in the second inning to score their lone run off the righty-hander, but then Davitt settled in. 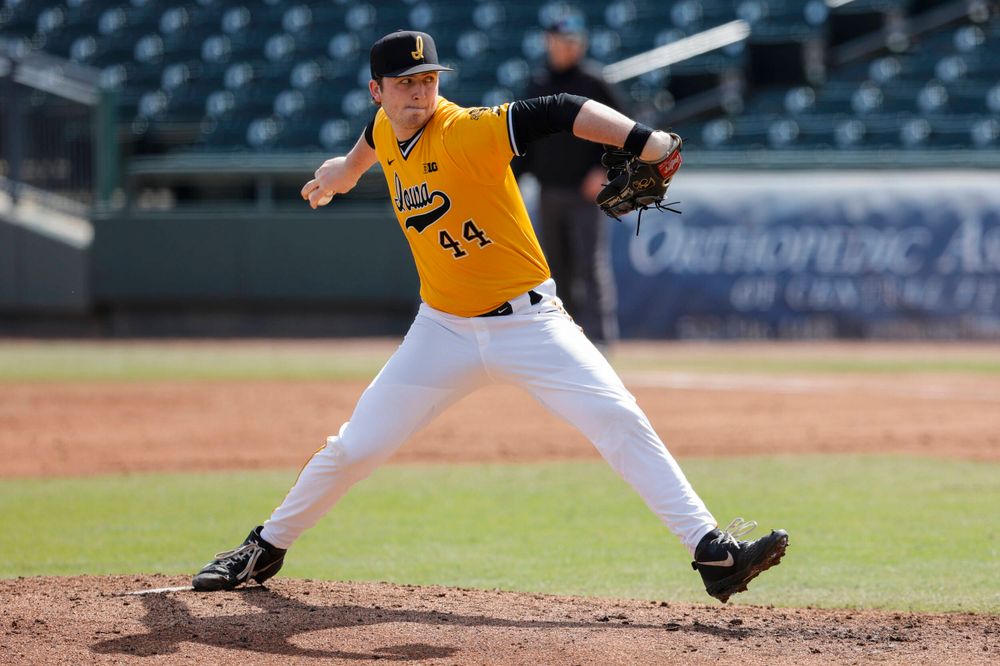 He retired nine straight batters in the middle of his start and finished with five strikeouts, while allowing only three hits and two walks

“Today started with another quality start from Duncan,” said Heller. “He had to fight through a little command issue in the second and we didn’t get the shutdown inning, but we were able to go out and score again and Duncan shut the door after that.

“He was solid through six and we were going to send him back out in the seventh, but we had the long inning where we scored a bunch of runs and decided to go to the bullpen and they shut the door.”

Iowa’s bullpen of freshman of Ty Langenberg, redshirt sophomore Ben Probst, and redshirt senior Grant Leonard allowed only one run one on two hits in the final three innings. Probst has not allowed a run in four appearances this season.

QUOTING HEAD COACH RICK HELLER
“We were able to grind some at-bats out and Brayden had a big two-out hit and then it opened the flood gates. We finally started to get some two-out hits, clutch hits. Sosa had a big day, Zeb had a big knock to break it open and Peyton had another home run. Top to bottom it was another errorless game and I couldn’t be happier with how we bounced back from a rough Friday night and followed it up with a great win on Sunday.”

OF NOTE
• Williams, Sosa, and Frazier combined for 10 of Iowa’s 11 RBIs.
• Iowa registered 10 hits for the third straight game. The Hawkeyes have tallied 10 or more hits five times this season.
• Iowa recorded seven walks at the dish and only punched out eight times.
• The Hawkeyes blasted seven home runs in four games this weekend.

UP NEXT
Next weekend, the Hawkeyes head to West Lafayette, Indiana, for a three-game set against Purdue at Alexander Field. The series opener is set for Friday at 3 p.m. (CT).