THIS WEEK
The University of Iowa baseball team heads to West Lafayette, Indiana, for a three-game series at Purdue from April 2-4 at Alexander Field. Friday’s series opener will begin at 3 p.m. (CT), Saturday will start at 1 p.m., and Sunday’s series finale begins at noon.

WATCH/LISTEN LIVE
• All three games will be streamed live via BTN+, a paid subscription service.
• The duration of the weekend’s games will be available on the Hawkeye Radio Network with Zach Mackey on the call. Fans can access the stream via TuneIn Radio.
• Fans can follow along for live updates via Twitter/@UIBaseball.

LEADING OFF
• The Hawkeyes became the second Big Ten team to post a winning record during a three team pod (four game weekend). Iowa went 3-1 in games against Ohio State and Maryland.
• Iowa is on a season-best three-game winning streak to improve to 7-8 overall with its next six games against the bottom two teams in the Big Ten — Purdue (3-11) and Minnesota (3-12).
• Three Hawkeye starting pitchers posted quality starts in Columbus in Cam Baumann (7 IP, 3 H, 1R, 5 K), Drew Irvine (6 IP, 3 H, 2 R, 5 K) and Duncan Davitt (6 IP, 3 H, 1 R, 5 K). It was Baumann’s third career quality start and Davitt’s second quality start this season.
• Iowa blasted seven home runs and had a total of 15 extra base hits in the four-games in Ohio. Senior Ben Norman and redshirt freshman Peyton Williams each had two home runs on the weekend, helping Iowa score 24 runs (6.0 avg.) in four games. The Hawkeyes scored a season-high 11 runs against Maryland.
• Redshirt junior Trenton Wallace is 2-1 with a 2.14 ERA with 32 strikeouts over 21 innings. He ranks in the top three in the Big Ten in six categories, including first in batting average against (.116) and third in ERA (2.14).
• Redshirt freshman Tyler Snep is leading the Big Ten in on-base percentage, reaching at a .564 clip. The Illinois native is fifth in slugging (.786) and seventh in batting average (.393).
• Senior Ben Norman is hitting .395 with five home runs, 11 runs and 13 RBIs over his last 10 games.
• Redshirt junior Dylan Nedved is 4-for-4 in save opportunities this season. The Shawnee, Kan., native has yet to allow a run in six appearances, spanning 10 1/3 innings.
• The Hawkeyes are fifth in the Big Ten in ERA (4.15) and fielding percentage (.975) and 10th in batting average (.235).
• Iowa is projected to finish fourth in the Big Ten Preseason Coaches Poll and fifth in the Big Ten Conference standings by D1Baseball.com in 2021.

HAWKEYE NOTABLES
• The Hawkeyes have had 10 or more hits in five of the last six games, including a season-high 12 hits against Nebraska on March 20.
• Iowa is averaging 6.5 runs per game over the past six games. The Hawkeyes scored a season-high 11 runs in the 11-2 victory over Maryland on March 28.
• Iowa went 3-1 at the Columbus Big Ten pod, becoming the second team to escape the pod format with a winning record (Indiana). The Hawkeyes did it while facing Ohio State and Maryland’s No. 1 and No. 2 starters.
• Redshirt senior Zeb Adreon hit a two-run, opposite field home run to break a four-all tie in the ninth inning to send the Hawkeyes to a 6-4 victory over Maryland on March 27. Adreon, who was 2-for-4 in the game, also had a triple in the contest.
• Senior captain Austin Martin missed the final three games last weekend because of injury.
• Outfielder Connor McCaffery will not play for the baseball program in 2021 because he will have hip surgery following the men’s basketball season.

WALLEY: THE ACE
Redshirt junior Trenton Wallace has stepped into the ace role for the Hawkeyes as the Friday night starter with ease.
• Wallace had a 15-inning shutout streak spanning two-plus starts against Ohio State, Nebraska, and Ohio State. He allowed five hits during the streak and fanned 24.
• He was named the Big Ten Pitcher of the Week on March 24 after scattering two hits over seven shutout innings in a 3-0 victory over Nebraska on March 19. The southpaw struck out eight Huskers in his career long outing.
• Wallace has allowed three or fewer runs in all of his starts and has eight or more strikeouts in three of four starts, including a career-high 10 punch outs against Ohio State.
• Wallace is leading the Big Ten in batting average against (.116) and fewest hits allowed (8). He also is tied for second in fewest runs and earned runs (5), third in ERA 2.14, tied for third in strikeouts (32) and tied for seventh in wins (2)

ROTATION NOTES
The Hawkeyes have used the same four starting pitchers throughout the first month of the season. This week’s three-game series rotation will include LHP Trenton Wallace, RHP Drew Irvine, and LHP Cam Baumann.
• Three of Iowa’s four starters notched quality starts, pitching six or more innings and allowing two or fewer earned runs in the Big Ten Columbus pod.
• Wallace (2-1, 2.16 ERA) will look to rebound from his shortest outing of the season, one where he went three innings, giving up three runs on one hit in an 8-1 loss to Ohio State.
• Irvine (0-2, 5.29 ERA) went six innings against Maryland in a no-decision during his last time out. He went six innings, allowing two runs on three hits and fanning five.
• Baumann (1-2, 4.15 ERA) had the best outing of his career, going a career-best seven innings and allowing one run in a win over Ohio State. It was Baumann’s third career quality start. 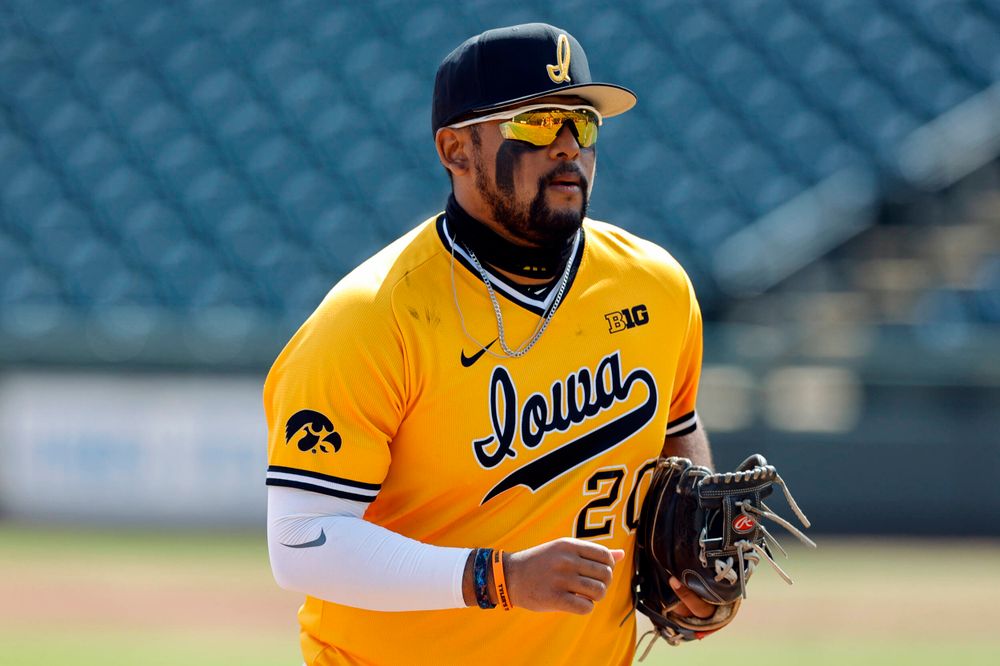 HEATING UP
Three Hawkeyes hit .375 or above during Big Ten pod in Columbus.
• Redshirt freshman Brayden Frazier hit a team-best .467 (7-of-15) with the first three multi-hit games of his career. He had his first career three-hit game, going 3-for-4 with two doubles in the 5-1 win over Ohio State on March 27.
• Redshirt junior Izaya Fullard posted a .417 average with five hits in 12 at-bats. He was 3-for-4 with a double March 27 against Maryland.
• Redshirt freshman Peyton Williams hit .375 with four extra base hits — two doubles, two home runs — and six RBIs.

B-NORM EMERGES
Take away the opening weekend, when Ben Norman was working his way back following a COVID pause, the outfielder has been Iowa’s best hitter. The Des Moines, Iowa, native has posted a .390 average (16-of-41) with five home runs, 13 RBIs, and 12 runs scored. He has hit safely in nine of 11 games since the opening weekend with five multi-hit games.
• Norman has scored at least one run in nine of the last 11 games with three games scoring two runs.
• He went 2-for-5 with a home run and a career-best four RBIs in series finale against Nebraska. Norman hit a second home run in the game, but was called out after mistakenly passing a teammate on the base paths.

SNEP-TACULAR START
Redshirt freshman Tyler Snep has hit safely in nine games this season, where he is hitting .393 (11-of-28) with three home runs and eight RBIs. The Illinois native also has 11 walks, contributing to his Big Ten-best .564 on-base percentage.
• Snep is fifth in the league in slugging (.786), tied for fifth in walks (11), and seventh in batting average (.393).
• He hit a cool .750 (3-for-4) in a pair of games against Nebraska on March 20-21 at Banks Field. He hit a solo home run — the first of his career — on March 20 before going 2-for-2 with a two-run homer, three RBIs, and two runs scored. Snep reached base safely in all five plate appearances as he had a career-best three walks.

STEADY SOSA
Redshirt senior Matthew Sosa has hit safely in 11 games this season, which included a career-best eight-game hitting streak to start the season. The third baseman is hitting .296 (16-of-54) with five doubles and 10 RBIs. He has four multi-hit games.
• Sosa has also been plunked a Big Ten-leading 10 times.
• He had a career game, going 3-for-5 with three RBIs and three runs scored in Iowa’s 11-2 win over Maryland on March 28. He had a first-inning home run and a double among his three hits. It was his second career blast.

THE BIG KAHUNAH
Redshirt freshman Peyton Williams has six RBIs in his last two games and 10 RBIs for the season. He is hitting .256 with seven extra-base hits (five doubles, two home runs).
• Williams has hit safely in eight games with two multi-hit and four multi-RBI games.
• He homered in consecutive games, hitting a two-run blast and finishing 2-for-4 with two RBIs in a 6-4 win over Maryland on March 27 and 2-for-4 with four RBIs — and a three-run shot — in the 11-2 win over the Terps on March 28.

BULLPEN BECOMING A STRENGTH
Iowa’s bullpen has been a strength, posting a 3.84 ERA over 61 innings. Fourteen players have pitched in relief, limiting opposing hitters to a .239 average.
• Redshirt junior Dylan Nedved has taken over as Iowa’s closer. The right-hander is 1-0 with a 0.00 ERA over six appearances and 10 1/3 innings. He recorded his first two saves against Ohio State (3/12) and Nebraska (3/14) and had his third and fourth saves in a split doubleheader against Ohio State and Maryland on March 27. Nedved has allowed five hits and he is tied for second in the Big Ten in saves.
• Senior Trace Hoffman has a team-high eight appearances, allowing two runs on seven hits over 7 2/3 innings. Hoffman (1-0, 2.35 ERA) picked up his first save of the season, pitching two innings in the 3-0 three-hit shutout of Nebraska on March 19. His first win came against Maryland, when he allowed one run on one hit, on March 27.
• Redshirt sophomore Ben Probst has a spotless ERA, allowing one hit over four appearances, spanning 3 1/3 innings.

THE GRANT LEONARD FILE
• Redshirt senior Grant Leonard is 0-0 with a 3.00 ERA in three appearances this season.
• For his career, Leonard has 20 career saves, which are tied for the second most in Hawkeye history with Tim Gudex (2004-06). Kurt Belger (1993-97) holds the program record with 22 career saves.
• Leonard also earned a “save” off the field as he and Iowa softball pitcher Allison Doocy became engaged in January.

DON’T COUNT ‘EM OUT
The Hawkeyes have overcome deficits to win 54 games since the start of the 2017 season and posted 14 walk-offs. Twenty-seven of those victories have come with Iowa trailing or being tied entering or through seven innings. Eighteen have come in the final at-bat.

SERIES RECORD
• The Hawkeyes are 100-69-1 all-time against Purdue.
• Iowa won two of three games over the Boilermakers in West Lafayette during the 2019 season.
• The Hawkeyes have won six straight series over Purdue dating back to the 2013 season. The two teams have played just four series during Rick Heller’s tenure at Iowa, where he is 9-3 in 12 games.

#HELLERBALL
• Head coach Rick Heller recorded his 900th career win against Grand View in a 15-2 victory on March 3, 2020, at Duane Banks Field
• Heller is one of nine coaches all-time to lead three different NCAA Division I teams to regional play.
• Heller recorded his 800th career win against Lehigh on March 12 at the Snowbird Classic in Florida. Heller won his 200th game at Iowa on May 1 in a victory over Western Illinois.
• The Hawkeyes have won 30 or more games in each of Heller’s six seasons as the helm of the program. It’s a first for the team since winning 30 or more in seven straight seasons from 1979-85.
• Heller has led the Hawkeyes to two NCAA Regional appearances; the program had three regional appearances in its history prior to his arrival.
• Heller is fourth in school history in career wins with 204 at Iowa, including the second (41) and fifth-most (39) in school history.
• Heller led Iowa to its first Big Ten Tournament title in 2017 — the first conference title since 1990 — and he guided the Hawkeyes to the Big Ten Tournament title game in consecutive seasons. Iowa has advanced to the league tournament in six straight years for the first time in program history.
• Heller has coached at least one first-team All-Big Ten selection in five of his first seven seasons, and has 21 Major League Baseball Draft picks in seven seasons — the most in a six-year stretch in school history.
• Iowa had a school-record six All-Big Ten selections in 2015 and five in 2017. The Hawkeyes have had 23 All-Big Ten honorees in six seasons under Heller.
• Iowa has posted winning streaks of nine games (in 2015) and eight games (in 2017) — the longest streaks for the program since 2012.