THIS WEEK
The University of Iowa soccer team faces third-seeded Minnesota on Sunday in the Big Ten Regional Final at Demirjian Park in Champaign, Illinois.  The game will begin at noon (CT).
The Hawkeyes advanced after defeating second-seeded Illinois on Thursday night. The winner of Sunday’s game will move on to the Big Ten Tournament on April 15.

LAST GAME
The Hawkeyes defeated Illinois in round one of the Big Ten Regional Weekend on Thursday. The Hawkeye defense held the Illini in check after giving up a season-high three goals in the previous meeting between the two teams. The offense, meanwhile, produced multiple scores for the first time this season. Josie Durr rocketed the first goal of the game at the start of the second half, and Meike Ingles called game in the 93rd minute with a strike of her own. 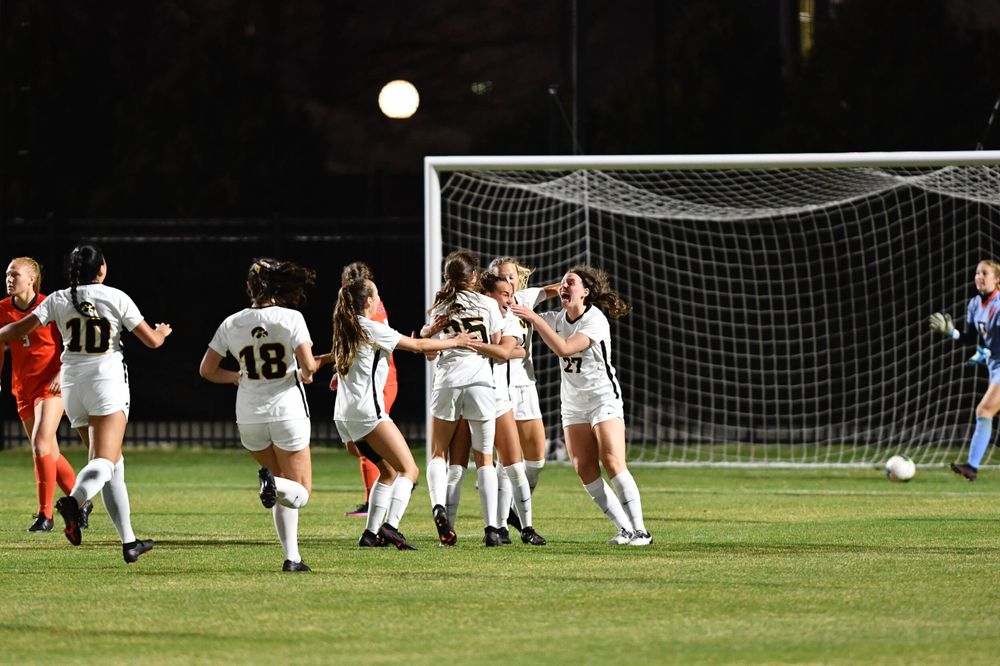 ENNEKING AT GOALKEEPER
Freshman goalkeeper Macy Enneking made six saves in goal for her third victory of the season on Thursday against Illinois. Enneking has given up just three goals in 504:14 minutes of game time this season, holding opponents to one score (3) or a shutout (2) in each of her four starts. The Hilliard, Ohio, native has notched 28 saves for a .903 save percentage.

FRESHMEN STRONG
Six Hawkeye freshmen — Aleisha Ganief, Meike Ingles, Rielee Fetty, Jalyn Mosley, Maggie Johnston, and Macy Enneking — have all started games this season.  Fetty has started a freshman-high 11 contests, while Johnston has started six games. Ingles and Ganief have each started nine contests, and Mosley has been in the starting 11 three times before being injured in the win at Maryland. Enneking made her first collegiate start against the Terps.

GETTING CHANCES
The Hawkeyes have out-shot their opponents in seven of 12 games this season. Junior Hailey Rydberg (33) and freshman Meike Ingles (26) lead the way in shot attempts, taking 44 percent of the team’s shots.

LOOKING AHEAD
The winner of Sunday’s game will advance to the Big Ten Tournament on April 15.