IOWA CITY, Iowa – Iowa State transfer Courtney Powell will join the University of Iowa soccer team as a graduate transfer for the 2021 fall season, it was announced Wednesday by head coach Dave DiIanni.

Powell, a forward from La Porte City, Iowa, earned second-team All-Big 12 honors during the 2019 season after leading the Cyclones in goals (four) and points (8). Powell did not play during the 2020 season.

“I am excited to officially become a Hawkeye,” said Powell. “Growing up, it was my dream to play for Iowa. I knew it was a smart decision to commit to Iowa State coming out of high school as I knew I wanted to pursue a career in the agriculture industry. I will forever be grateful for my time and experiences in Ames.

“I am eager to start back playing the game I love. After the 2020 fall season at Iowa State, I was ready to hang up my cleats. Plans changed when the rock of our family, my father, passed away from COVID-19 in February. I will be putting on my cleats one more season to honor and play for him.

“I couldn’t think of a better way than to do it on this gritty and talented Iowa team. It feels good to pull back out my black and gold attire again. I am ready to compete in the Big Ten Conference with this team.”

Powell appeared in 55 games as a Cyclone during her three years in Ames with 39 starts. She scored nine career goals – two as a freshman, three as a sophomore and four as a junior – and finished with 19 career points. She had game-winning goals in wins over UMKC and South Dakota State. 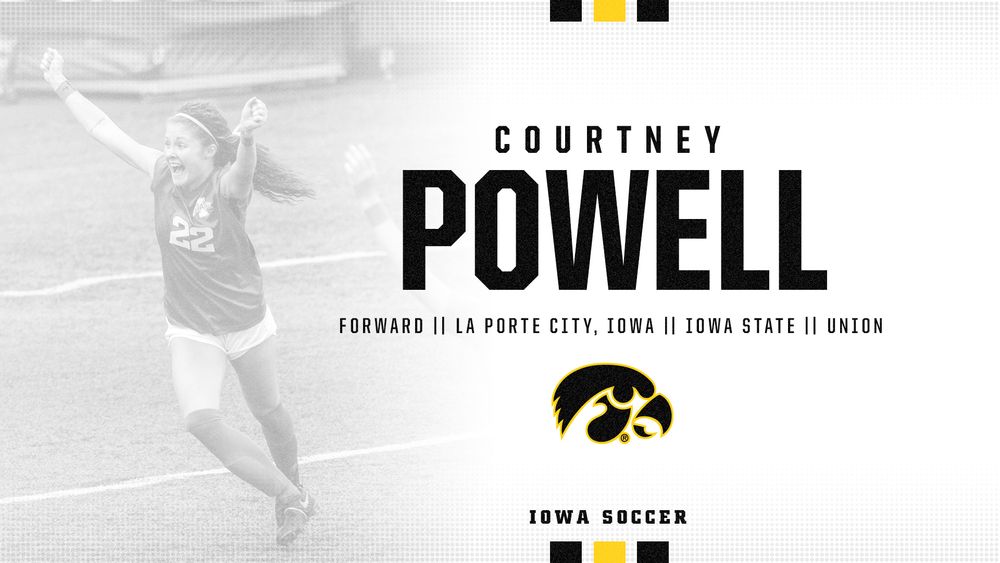 “Courtney is an individual who I am very familiar with as we were recruiting her out of high school,” said DiIanni. “When she expressed interest in using her final season of eligibility at Iowa, we were excited to discuss that opportunity.

“Courtney will bring immediate credibility, experience and talent to our frontline with her elite speed and competitiveness. We look forward to Courtney playing for the Hawkeyes this fall and helping contribute toward our growth.”

During her prep career at Union High School, Powell led the state of Iowa in scoring in 2014 and 2015, scoring 111 goals in two seasons. Her team qualified for the 2015 state tournament. Powell also played club soccer for CRSA, winning the State Cup Championship in 2011, 2013, and 2015.

She was also a state champion in track and field, winning the 4×100 relay and was a medalist in the 400-meter dash.

Iowa (7-8-1) posted its first-ever NCAA Tournament victory in program history on Tuesday, downing Campbell, 1-0, on its home field. The Hawkeyes will now face No. 3 UCLA on Friday at 2 p.m. (CT) in the NCAA Second Round.