WATCH/FOLLOW LIVE
• Thursday’s game will be streamed live on FloFC.
• Links to streaming and live stats can be found at hawkeyesports.com/soccergameday.
• Fans can follow the Iowa soccer program on Twitter (@HawkeyeSoccer) for live in-game updates.

WHAT YOU NEED TO KNOW
• Head coach Dave DiIanni is in his eighth season at the helm of the soccer program. Last spring, DiIanni’s team posted a 7-9-1 record, finishing the season on a red-hot postseason run that saw the Hawkeyes win the program’s first Big Ten Tournament title and reach the NCAA Tournament Second Round for the first time in school history. Iowa lost just one senior from that youthful squad heading into this season.
• Over the past two seasons, Iowa has made back-to-back NCAA Tournament appearances for the first time in program history.
• Last spring, the Hawkeyes lost two-time Iowa Offensive Player of the Year Devin Burns and veteran goalkeeper Claire Graves, but discovered a group of new young playmakers as the season continued. Sophomore Meike Ingles closed out her rookie campaign with four postseason goals, earning Big Ten Tournament Most Outstanding Offensive Player honors. Sophomore Macy Enneking was named the conference tournament Most Outstanding Defensive Player, and was an unanimous Big Ten All-Freshman Team selection.
• Those two headline a group of impactful underclassmen this season, though the team will also feature a robust class of nine senior leaders anchored by midfielder Hailey Rydberg, who was a captain last season and voted the team’s Most Valuable Player. Senior Sara Wheaton is the returning Iowa Defensive Player of the Year, while redshirt senior Josie Durr started all 17 games last season and is the team’s most experienced player.
• The Hawkeyes welcome nine newcomers in 2021, including seven freshmen and two graduate transfers. Courtney Powell was Iowa State’s top offensive weapon last spring, leading the team in points (8), goals (4), shots (29) and shots on goal (23). She is joined by Alyssa Walker, who scored four goals for Richmond last season and previously earned second-team Atlantic-10 All-Conference honors in 2019.
• Three Hawkeyes — Hailey Rydberg, Sara Wheaton, and Samantha Cary — were named to the
Big Ten Preseason Honors List. Iowa was picked to finish seventh out of 14 teams in the preseason
coaches’ poll.

LAST GAME
Iowa defeated Northern Iowa, 1-0, in an exhibition last Friday at the Iowa Soccer Complex. Freshman Kenzie Roling rocketed the only score of the night on a first half penalty kick. The score was Roling’s second of the season; she previously scored in the final minute of Iowa’s season opening exhibition against South Dakota. The Hawkeyes won that contest, 3-0, during the first week of August practice. Seniors Josie Durr and Hailey Rydberg also found the back of the net against the Coyotes.

GETTING THINGS ROLING
Freshman Kenzie Roling scored in each of Iowa’s exhibitions this month, including the go-ahead goal against Northern Iowa last Friday. 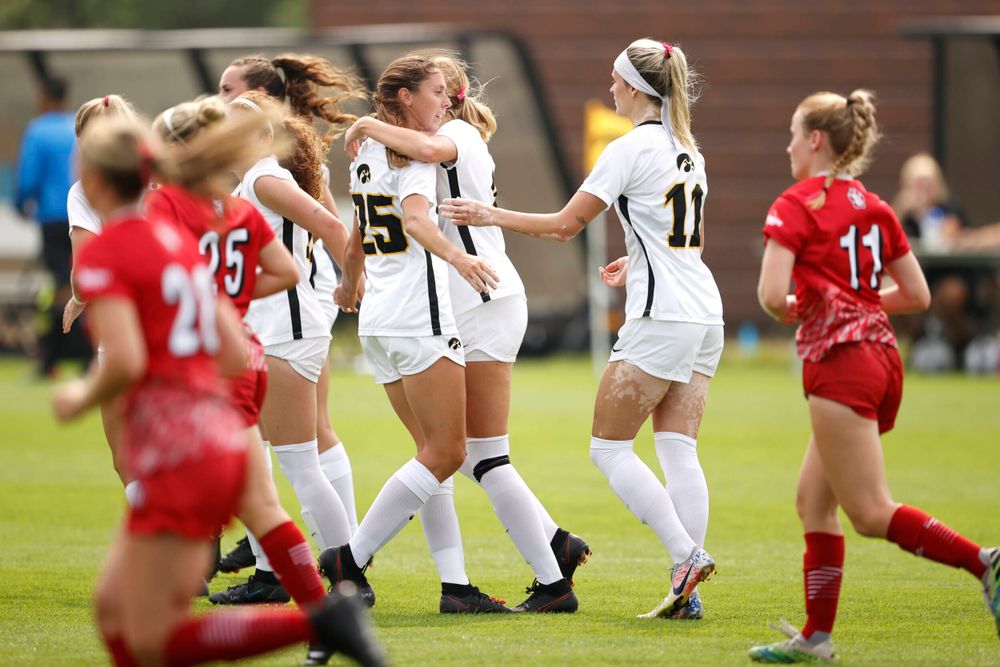 ENNEKING AT GOALKEEPER
Sophomore goalkeeper Macy Enneking is another Hawkeye standout. Enneking was the only unanimous Big Ten All-Freshman Team selection last season and earned Big Ten Tournament Most Outstanding Defensive Player accolades for allowing just one goal in four games at the conference tournament. She tallied 52 saves across 11 games and averaged a conference-best .912 save percentage, allowing just 5 goals in 956 minutes played. The Hilliard, Ohio native pitched shutouts in each of Iowa’s two exhibition contests this month.

SCOUTING THE BLUE DEMONS
• DePaul opened the season with a 1-0 exhibition loss to Wisconsin. The Blue Demons outshot their opponent 5-4, but a second half goal was enough for the Badgers to escape Chicago with the victory.
• The Blue Demons finished with a 2-5 record in conference play last spring, with wins against Creighton and Butler.
• Forward Morgan Turner is the team’s leading scorer, logging 22 career goals. Turner found the back of the net 10 times in 2019 when she was named to the All-BIG EAST first team.
• Head Coach Michelle O’Brien will be making her regular season debut with the Blue Demons. She has been an assistant on the DePaul staff since 2009.

SCOUTING THE BILLIKENS
• Saint Louis opened the year with a pair of exhibition victories against SIUE and Evansville. They kick off the regular seaon this Thursday at home against Xavier.
• The Billikens are ranked No. 21 in the United Soccer Coaches’ preseason poll. Saint Louis checks in at No. 16 in the TopDrawSoccer.com preseason rankings.

LOOKING AHEAD
The Hawkeyes return to Iowa City for their home opener against Iowa State on Aug. 26 at 6 p.m. (CT). The game will be televised on BTN as Iowa opens the 2021-22 Cy-Hawk Series at the Iowa Soccer Complex.