Notes: No. 2 Iowa Hosts No. 21 Quakers on Saturday

ON THE MAT
The second-ranked University of Iowa wrestling team returns to Carver-Hawkeye Arena to host No. 21 Penn on Saturday at 2 p.m. (CT).
• The Hawkeyes will also send wrestlers to the Cyclone Open on Saturday in Ames, Iowa. Action begins at 9 a.m. (CT) from Hilton Coliseum.

FOLLOW ALONG LIVE
• Saturday’s dual will be streamed live on B1G+ with former Hawkeyes Alex Marinelli and Kaleb Young on the call. It is a paid subscription service.
• Iowa wrestling events are broadcast by AM-800 KXIC and streamed on hawkeyesports.com via YouTube. Steven Grace and Mark Ironside will call the action for Hawkeye Sports Properties, a property of Learfield.
• Follow Iowa wrestling on social media via Twitter (@Hawks_Wrestling), Facebook/iowahawkeyewrestling and Instagram (@iowahawkeyewrestling).
• Live results will be available via TrackWrestling.

No. 2 Iowa Hawkeyes Probable Lineup vs. No. 21 Pennsylvania Quakers 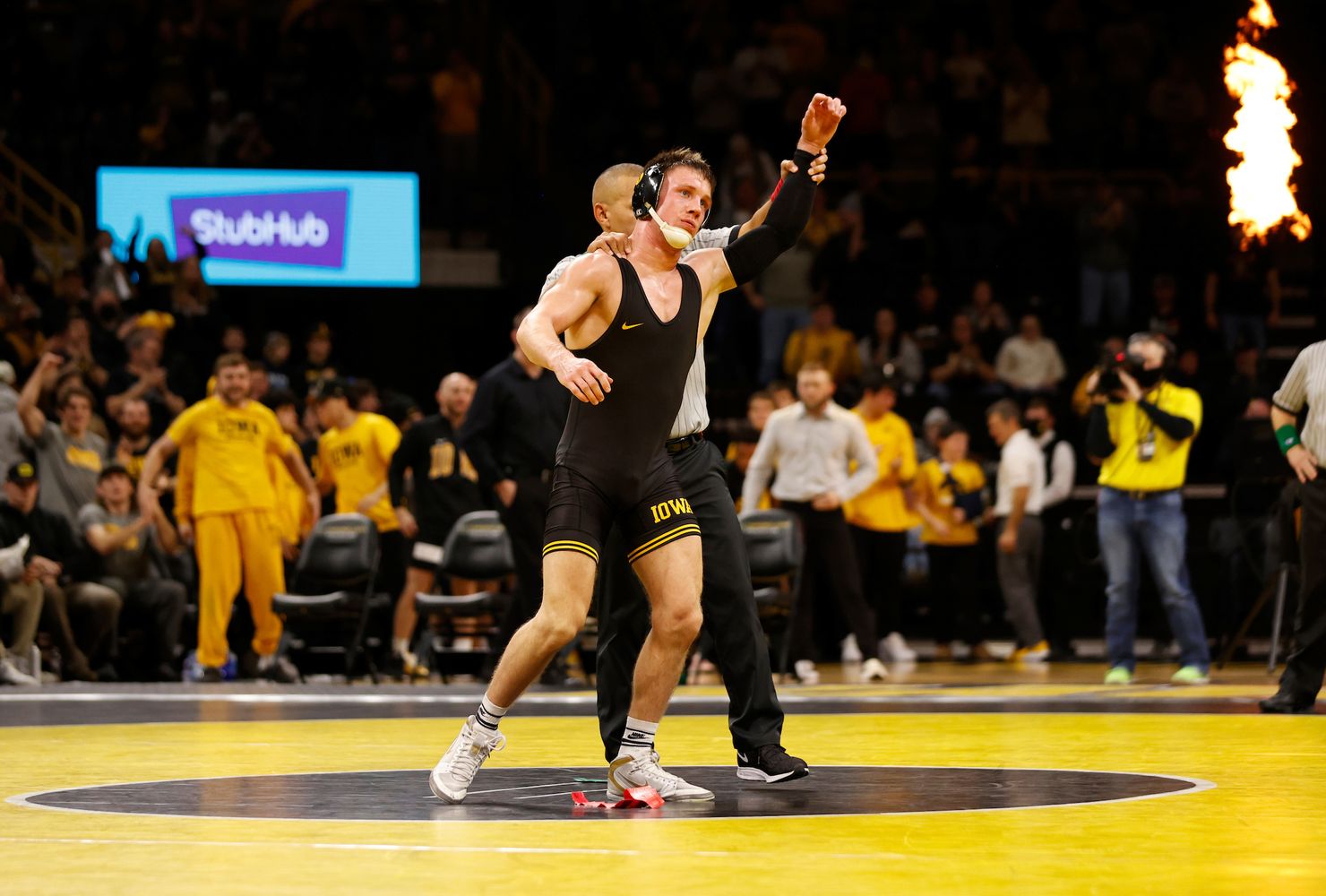 COBE JOINS THE RANKINGS
For the first time in his career, junior Cobe Siebrecht has joined the national rankings, as he comes in at No. 29 at 157 pounds in the Nov. 22 Intermat rankings.
• The Lisbon, Iowa, native is 3-0 this season — all three by bonus points. Siebrecht majored Army’s No. 28 Nate Lukez on Nov. 17 for his first career ranked win and he moved up a weight class and earned a major over Buffalo’s Noah Grover a day later at 165.

4 MATCHES, 4 FALLS
Senior Tony Cassioppi hasn’t wrestled beyond the first period in his first four matches of the season. The Roscoe, Illinois, native has falls in 2:13, 1:26, 1:28 and 0:53 for a grand total of 5:20 of mat time.
• It is the second time in his career he has pinned four consecutive opponents. In 2020-21 during his sophomore season, Cassioppi had four straight falls and six pins in a seven-match stretch.

MURIN STEPS UP
After winning four matches with bonus points during the 2021-22 season, redshirt senior Max Murin has matched that total in his first four matches in 2022-23.
• Murin has two major decisions and two technical falls in his four matches. The Ebensburg, Pennsylvania, native is ranked as high as No. 6 in the Intermat rankings.

PK PUTS ON A SHOW
• Sophomore Patrick Kennedy has scored 20 or more points in all three of his matches this season in producing two technical falls and a major decision.

SUPER SUBS
• Senior Joe Kelly and junior Zach Glazier both stepped into the Hawkeye lineup and produced bonus points in the 35-6 win over Sacred Heart.
• Kelly posted a major decision at 174 pounds over Ryan Bolletino, 17-7, while Glazier made quick work of the Pioneers’ Nick Copley, winning, 18-3, in the second period.

HAWKEYE TAKEDOWNS
• Sophomores Patrick Kennedy has a nine-match winning streak dating back to last season. (He wrestled the 2021-22 season unattached).
• Sophomore Cullan Schriever is 7-0 this season with four bonus point wins. The Mason City, Iowa, native racked up 43 points in consecutive wins at the Arm Bar at the Armory event in Albany, New York.
• Caleb Rathjen (157) and Carson Martinson (174) made their Hawkeye debuts at the Arm Bar at the Armory. Rathjen picked up his first career win over Buffalo’s Nick Stampoulus, 6-0.

IOWA AT OPEN TOURNAMENTS
• Sophomore Cullan Schriever and freshman Jace Rhodes both won 133-pound titles at the Luther Open on Nov. 12 in Decorah, Iowa. Schriever, who was competing unattached, won the elite division, while Rhodes won the silver (freshman-only) bracket.
• The Hawkeyes won two more titles at the Lindenwood Open when Rhodes (133) and Joel Jesuroga (149) won the black brackets.

FRESHMAN TRACKER
Eight Hawkeye freshman have competed as attached competitors during the 2022-23 season. Under new NCAA guidelines, freshmen can compete in five dates of competition during the student-athlete’s initial year of collegiate enrollment without using a season of competition.
• Here is a list of competitions for Iowa’s freshmen in 2022-23: Jace Rhodes (2), Kolby Franklin (2), Easton Fleshman (2), Gage Marty (2), Joel Jesuroga (1), Drake Rhodes (1), Mickey Griffith (1) and Bradley Hill (1). 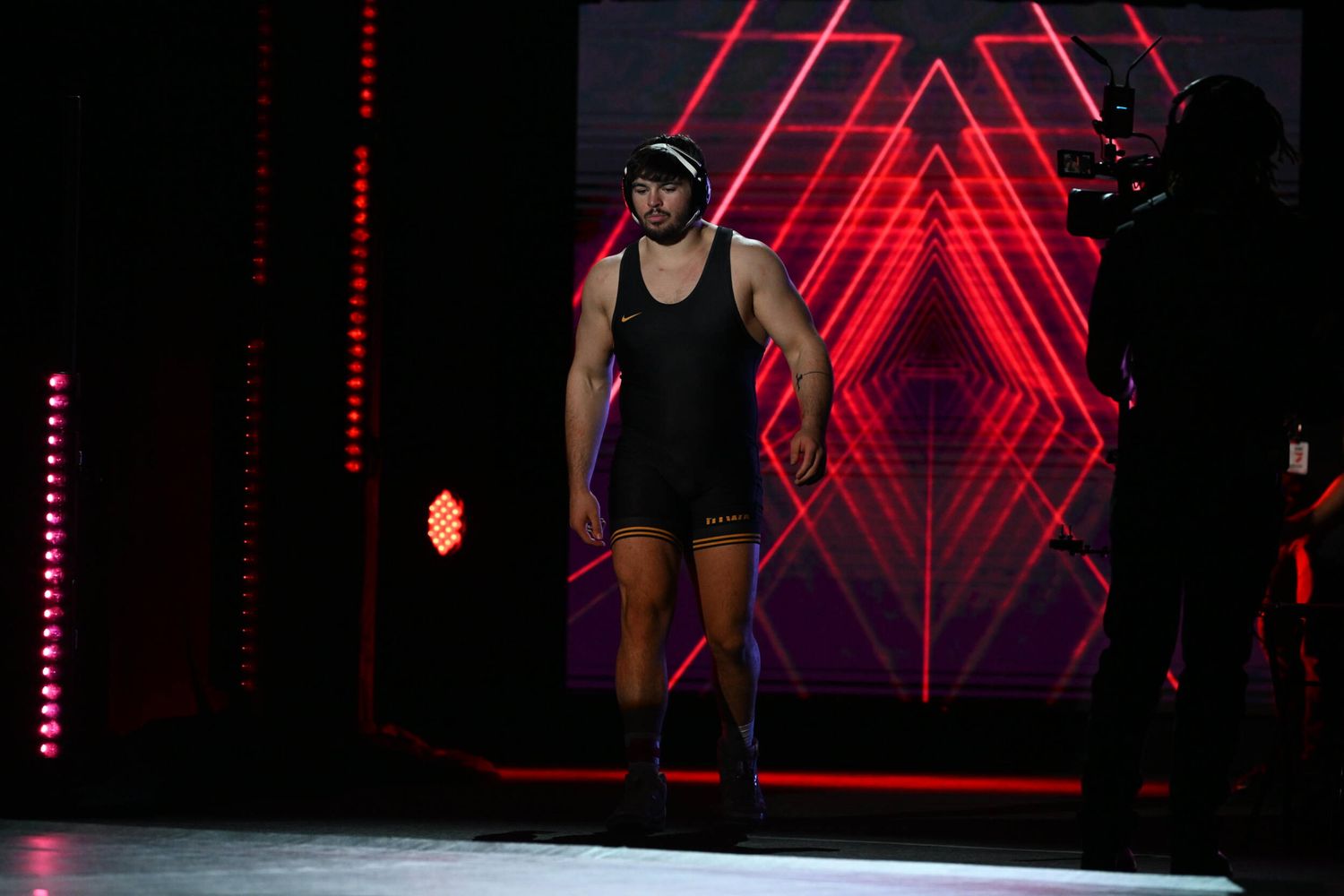 UP NEXT
The Hawkeyes will host No. 7 Iowa State in an Iowa Corn Cy-Hawk Series matchip on Dec. 4 in Carver-Hawkeye Arena. The dual will begin at 1:30 p.m. (CT) and be televised live on BTN.