ON THE MAT
The second-ranked University of Iowa wrestling team will host No. 7 Iowa State in an Iowa Corn Cy-Hawk Series dual on Sunday at 1:33 p.m. (CT) on Mediacom Mat inside Carver-Hawkeye Arena. The meet is sold out.

FOLLOW ALONG LIVE
• Sunday’s dual will be televised live on the Big Ten Network with Shane Sparks (play-by-play), Jim Gibbons (color analyst) and Tim Johnson (sideline reporter) on the call.
• Iowa wrestling events are broadcast by AM-800 KXIC and streamed on hawkeyesports.com via YouTube. Steven Grace and Mark Ironside will call the action for Hawkeye Sports Properties, a property of Learfield.
• Follow Iowa wrestling on social media via Twitter (@Hawks_Wrestling), Facebook/iowahawkeyewrestling and Instagram (@iowahawkeyewrestling).
• Live results will be available via TrackWrestling with a link available on hawkeyesports.com.

No. 2 Iowa Hawkeyes Probable Lineup vs. No. 7 Iowa State Cyclones 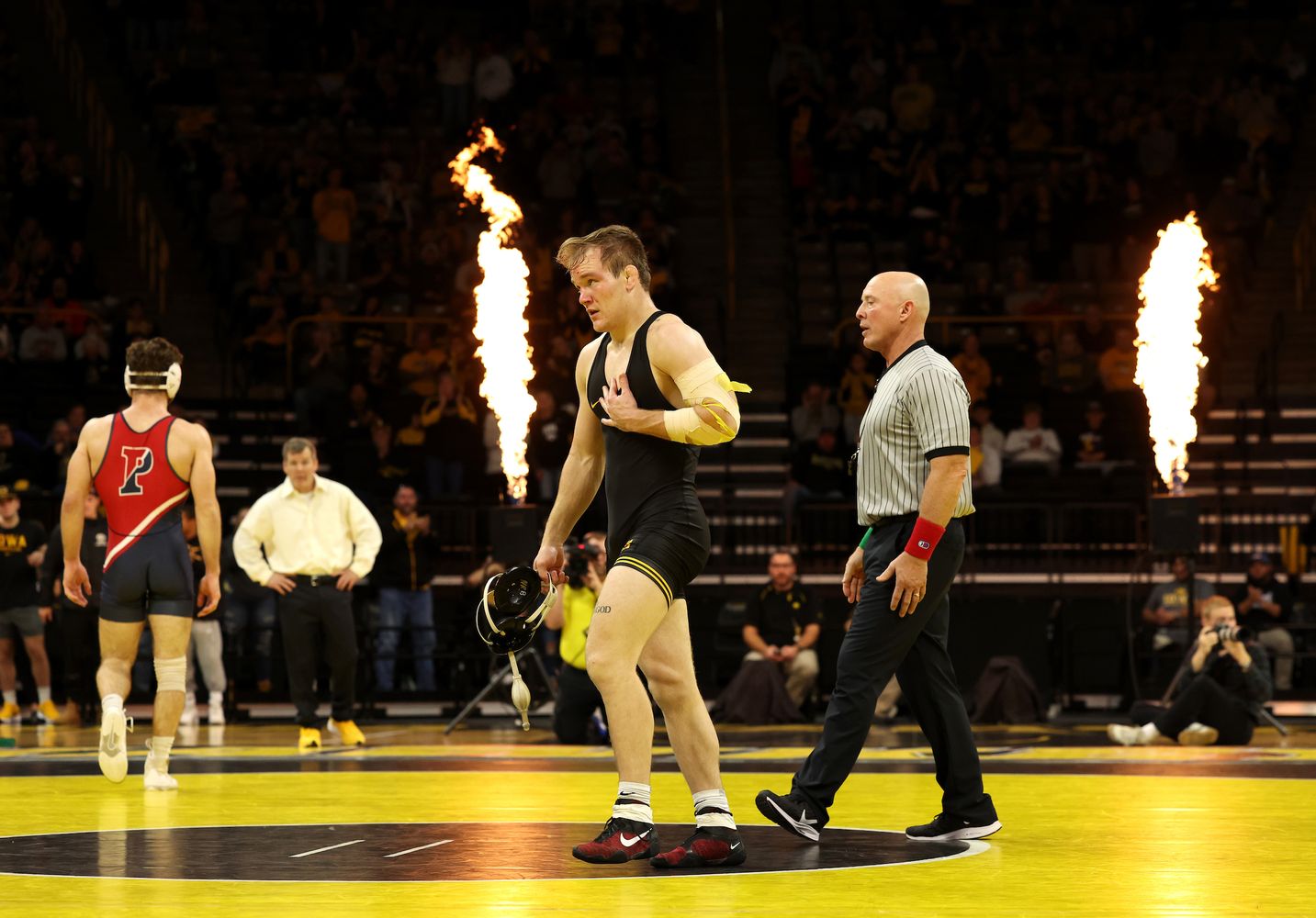 LAST MEET
The Hawkeyes improved to 5-0 on the season with a 26-11 victory over No. 21 Penn on Nov. 26 in Carver-Hawkeye Arena. Iowa won seven of the 10 matches and it secured bonus points in three bouts, including a Cobe Siebrecht fall to cap the dual.

IOWA CORN CY-HAWK SERIES
The Cy-Hawk Series is in its 18th season in 2022-23, being sponsored for the 11th time by Iowa Corn.
• Iowa State leads the 2022-23 Iowa Corn Cy-Hawk Series, 11-0, entering Sunday’s dual. The Cyclones were victorious in women’s soccer, volleyball, football and earned higher finishes at NCAA Regionals in men’s and women’s cross country earlier this fall.
• Iowa wrestling owns a 16-1 lead in Cy-Hawk Series duals. Iowa State won the first meeting in 2004 and Iowa has won the last 16 meetings. (Iowa has won 17 straight overall, including a meeting at the National Duals.)
• Sunday begins Cy-Hawk week as the two schools will meet in wrestling (Dec. 4), women’s basketball (Dec. 7), men’s basketball (Dec. 8) and women’s swimming and diving (Dec. 9).
• The series awards two points (except football, which is worth three) to the winning school in each head-to-head match-up between the two institutions. Additionally, one point is awarded to an institution if the graduation rate of its student-athletes is greater than the national average as reported each fall by the NCAA.

MOVIN’ ON UP
A week after joining the national rankings for the first time in his career, junior Cobe Siebrecht has climbed to No. 14 nationally at 157 pounds by Amateur Wrestling News. Siebrecht is 4-0 this season with two pins and two major decisions, including a fall against Penn’s 10th-ranked Anthony Artalona in his last match.
• Siebrecht has two victories over ranked opponents amongst his four wins this season.

4 MATCHES, 4 FALLS
Senior Tony Cassioppi opened the season with four pins in his first four matches with falls in 2:13, 1:26, 1:28 and 0:53 for a grand total of 5:20 of mat time.
• It was the second time in his career he has pinned four consecutive opponents. In 2020-21 during his sophomore season, Cassioppi had four straight falls and six pins in a seven-match stretch.
• Cassioppi is 5-0 with bonus-point victories in all five of his matches in 2022-23. He notched his first win over a ranked foe this season against Penn, majoring No. 15 Ben Goldin, 9-0.

MAD MAX
After winning four matches with bonus points during the 2021-22 season, redshirt senior Max Murin matched that total in his first four bouts of 2022-23.
• Murin has two major decisions and two technical falls this season. The Ebensburg, Pennsylvania, native is 5-0 and is ranked as high as No. 6 in the national rankings. During his last time out, Murin posted an overtime victory over Penn’s 10th-ranked Doug Zapf to clinch Iowa’s fifth dual win of the season.

PK PUTS ON A SHOW
• Sophomore Patrick Kennedy has scored 20 or more points in three matches — and is averaging 20 points per match — this season in producing two technical falls and two major decisions.
• Kennedy will face the highest ranked opponent of his career on Sunday, squaring off against No. 3 David Carr of Iowa State.

HAWKEYE TAKEDOWNS
• Sophomores Patrick Kennedy has a 10-match winning streak dating back to last season. (He wrestled the 2021-22 season unattached).
• Senior Nelson Brands made his 2022-23 season debut against No. 21 Penn and he produced a 5-1 victory over No. 19 Nick Incontrera. Brands is now ranked as high as No. 15 nationally by Intermat.
• Senior Real Woods is listed in Iowa’s probable lineup against Iowa State for the first time in his career. The Stanford transfer has a 42-8 career record.

IOWA AT OPEN TOURNAMENTS
• Sophomore Cullan Schriever and freshman Jace Rhodes both won 133-pound titles at the Luther Open on Nov. 12 in Decorah, Iowa. Schriever, who was competing unattached, won the elite division, while Rhodes won the silver (freshman-only) bracket.
• The Hawkeyes won two more titles at the Lindenwood Open when Rhodes (133) and Joel Jesuroga (149) won the black (freshman) brackets.
• Freshman Kolby Franklin led a group of five Hawkeyes that placed at the Harold Nichols Cyclone Open, as he finished as runner-up at 197 pounds. UP NEXT
Iowa will hit the road, traveling to Tennessee to face Chattanooga on Dec. 10 in its final dual of the 2022 calendar year.