Notes: No. 2 Hawkeyes Head to Chattanooga

ON THE MAT
The second-ranked University of Iowa wrestling team hits the road for its final dual of the 2022 calendar year, traveling to Chattanooga, Tennessee, to face Chattanooga on Saturday. The dual will begin at 6 p.m. (CT) from McKenzie Arena.
• The Hawkeyes will also send wrestlers to the UNI Open in Cedar Falls on Dec. 10.

FOLLOW ALONG LIVE
• Saturday’s dual will be streamed on ESPN+ with Chris Goforth and Travis Garrard on the call. It is a paid subscription service.
• Iowa wrestling events are broadcast by AM-800 KXIC and streamed on hawkeyesports.com via YouTube. Steven Grace will call the action for Hawkeye Sports Properties, a property of Learfield.
• Follow Iowa wrestling on social media via Twitter (@Hawks_Wrestling), Facebook/iowahawkeyewrestling and Instagram (@iowahawkeyewrestling).
• Live results will be available via TrackWrestling with a link available on hawkeyesports.com.

BACK POINTS
• The Hawkeyes have won nine consecutive duals dating back to the 2021-22 season.
• Associate head coach Terry Brands spent three years as head coach at Chattanooga from 2002-05. He led the Mocs to the 2005 Southern Conference title, crowning three champions and two All-Americans.
• Iowa is 4-0 all-time against the Mocs, including posting a 39-0 win during the last meeting in 2019 in Iowa City. This is Iowa’s second trip to Chattanooga in program history (37-6 in 2012).
• Junior Cobe Siebrecht is 5-0 with five bonus point victories this season. 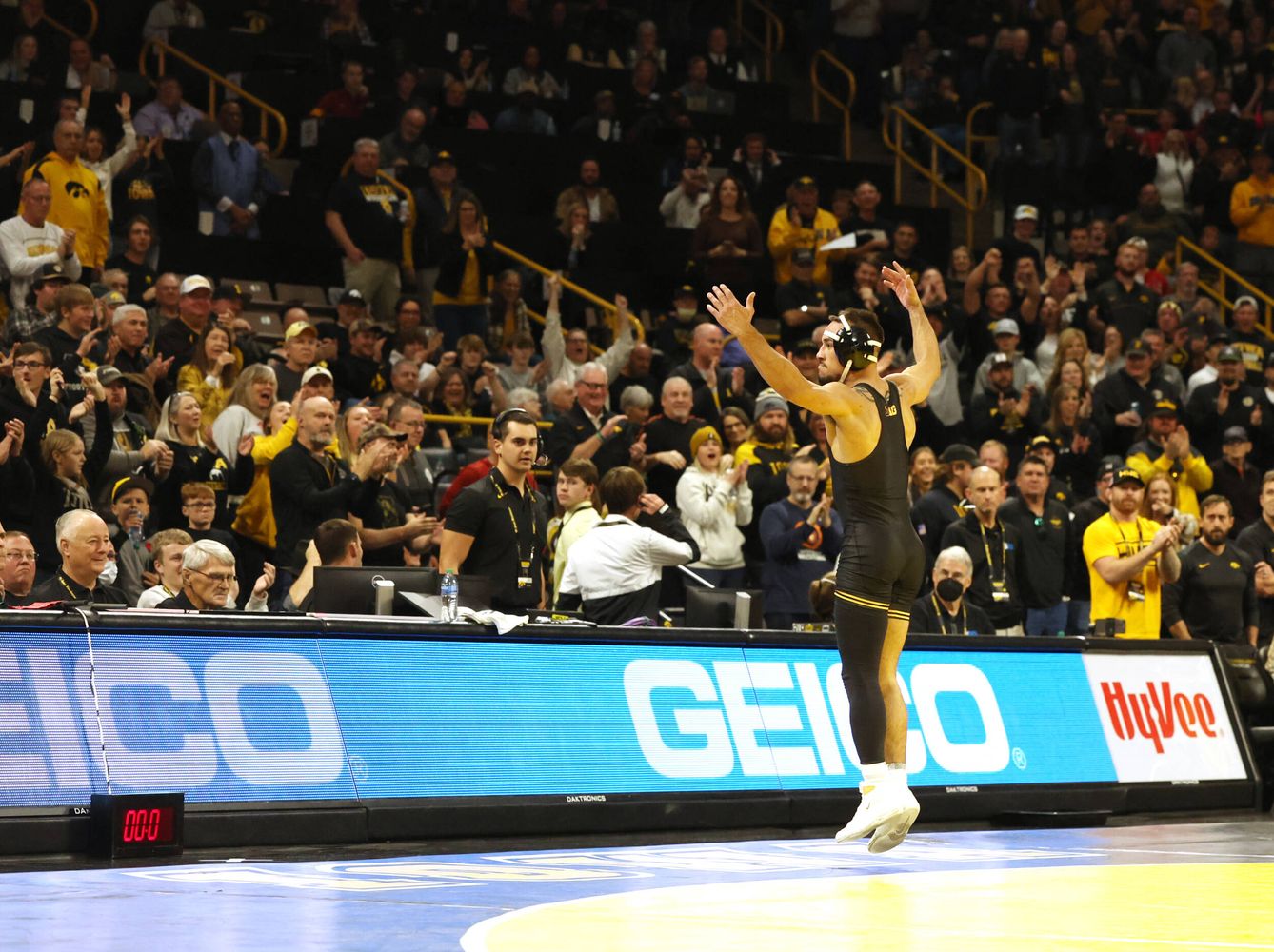 WE MEET AGAIN
• Sophomore Cullan Schriever faced Chattanooga’s Brayden Palmer at the Southern Scuffle in 2021 with Palmer posting a 4-2 victory in overtime in the third-place match.
• Senior Nelson Brands defeated 17th-ranked Rocky Jordan at 184 pounds during the 2020-21 season when Jordan wrestled at Ohio State. Brands won the match 3-0. Jordan is the Mocs’ highest ranked wrestler, coming in at No. 13 by AWN.

BLACK & GOLD DEBUT
Senior Real Woods notched a 4-2 victory over No. 10 Casey Swiderski on Dec. 4 in his first match in a Hawkeye singlet. It was Woods’ 43 career victory (to eight defeats). The New Mexico native transferred to Iowa from Stanford.

SIEBRECHT CONTINUES TO IMPRESS
Junior Cobe Siebrecht is 5-0 this season, posting bonus point victories in all five of his matches. He has two pins and three major decisions.
• Siebrecht is ranked in all three polls, coming in as high as No. 14 by Amateur Wrestling News at 157 pounds.
• Siebrecht had a six-point move in the first period en route to a 10-2 major decision over Iowa State’s Jason Kraisser. The Lisbon, Iowa, native pinned Penn’s 10th-ranked Anthony Artalona on Nov. 26 to record the highest ranked win of his career.
• Siebrecht has two victories over ranked opponents amongst his five wins this season.

CASS – 4 PINS, 6 WINS
Senior Tony Cassioppi opened the season with four pins in his first four matches with falls in 2:13, 1:26, 1:28 and 0:53 for a grand total of 5:20 of mat time.
• It was the second time in his career he has pinned four consecutive opponents. In 2020-21 during his sophomore season, Cassioppi had four straight falls and six pins in a seven-match stretch.
• Cassioppi is 6-0 with five bonus-point victories in 2022-23. He has posted back-to-back wins over ranked foes, downing Penn’s 15th-ranked Ben Goldin, 9-0, on Nov. 26 before beating Iowa State’s Sam Schuyler, 9-2, to clinch Iowa’s 18 straight victory over the Cyclones.

MAD MAX
After winning four matches with bonus points during the 2021-22 season, redshirt senior Max Murin matched that total in his first four bouts of 2022-23.
• Murin has two major decisions and two technical falls this season. The Ebensburg, Pennsylvania, native is 5-1 and is ranked as high as No. 6 in the national rankings.

PK PUTS ON A SHOW
• Sophomore Patrick Kennedy has scored 84 points — 16.8 points per match — in his five matches this season. The Minnesota native is 4-1 with two technical falls and two majors this season.

IOWA AT OPEN TOURNAMENTS
• Sophomore Cullan Schriever and freshman Jace Rhodes both won 133-pound titles at the Luther Open on Nov. 12 in Decorah, Iowa. Schriever, who was competing unattached, won the elite division, while Rhodes won the silver (freshman-only) bracket.
• The Hawkeyes won two more titles at the Lindenwood Open when Rhodes (133) and Joel Jesuroga (149) won the black (freshman) brackets.
• Freshman Kolby Franklin led a group of five Hawkeyes that placed at the Harold Nichols Cyclone Open, as he finished as runner-up at 197 pounds. 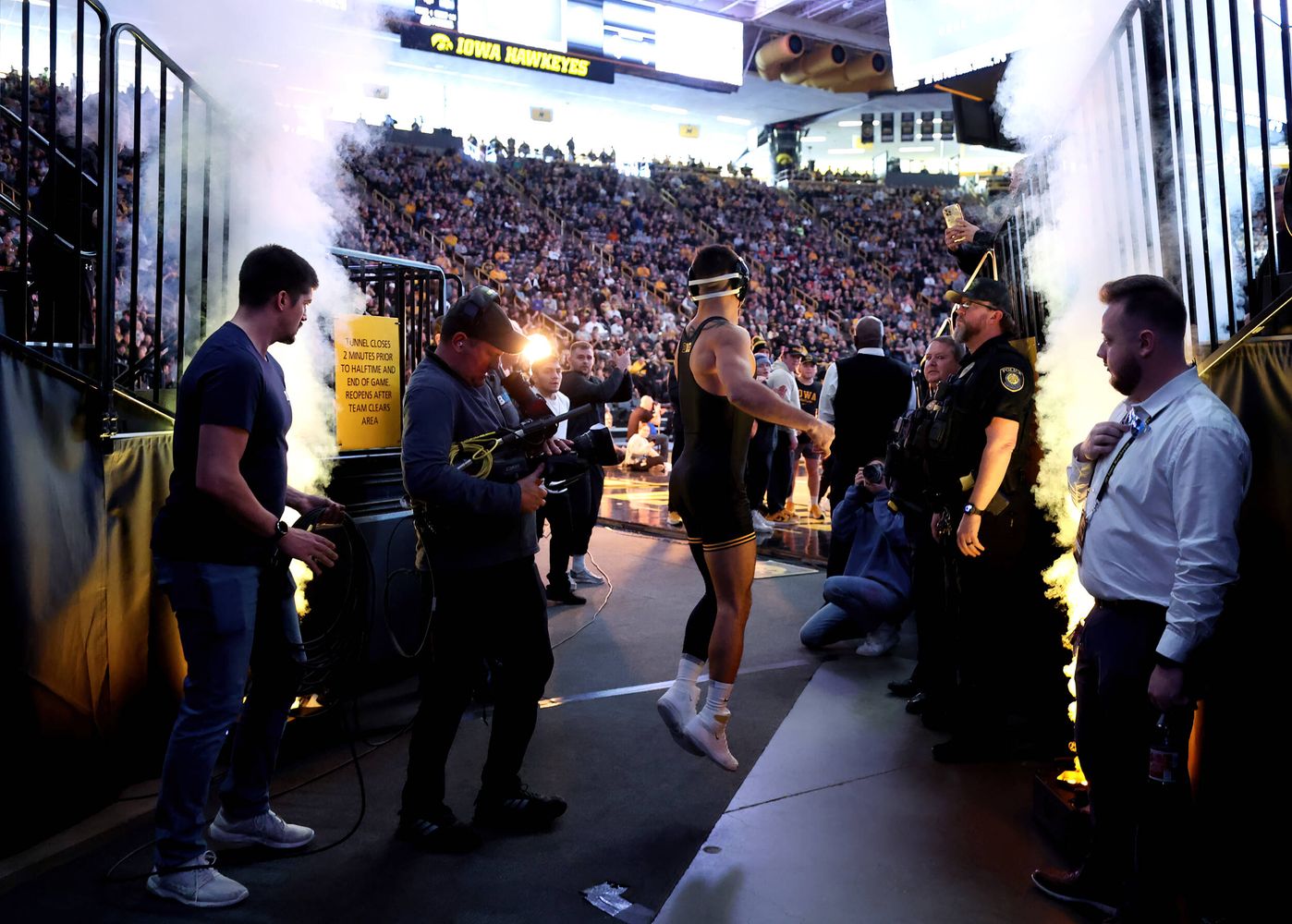 UP NEXT
The Hawkeyes will return to action Dec. 29-30 when they compete in the Soldier Salute in Coralville, Iowa, at Xtream Arena.