ON THE MAT
The second-ranked University of Iowa wrestling team opens Big Ten Conference action with a double dual weekend.
• The Hawkeyes will host Illinois at 7 p.m. (CT) on Friday inside Carver-Hawkeye Arena for Fan Appreciation Day. The dual is sold out.
• Iowa hits the road for a Sunday matinee, traveling to West Lafayette, Indiana, to face Purdue at 1 p.m. (CT). The dual will be held at Holloway Gymnasium.

FOLLOW ALONG LIVE
• Friday’s dual will be streamed online via B1G+ — a paid subscription service. Former Hawkeyes Alex Marinelli and Kaleb Young will be on the call.
• Sunday’s dual will be televised on BTN with Shane Sparks, and Jim Gibbons on the call.
• Iowa wrestling events are broadcast by AM-800 KXIC and streamed on hawkeyesports.com via YouTube. Steven Grace and Mark Ironside will call the action for Hawkeye Sports Properties, a property of Learfield.
• Follow Iowa wrestling on social media via Twitter (@Hawks_Wrestling), Facebook/iowahawkeyewrestling and Instagram (@iowahawkeyewrestling).
• Live results will be available via TrackWrestling with a link available on hawkeyesports.com.

BACK POINTS
• The Hawkeyes have won 10 consecutive duals dating back to the 2021-22 season. Iowa has won its last eight Big Ten openers.
• Senior Tony Cassioppi is 11-0 this season with a career-high nine falls — all coming in the first period. The nine falls are the most by a Hawkeye since Alex Marinelli in 2018-19.
• Junior Cobe Siebrecht is 6-0 with five bonus point victories this season.
• Senior Spencer Lee is riding a 43-match winning streak dating back to the 2019 season. 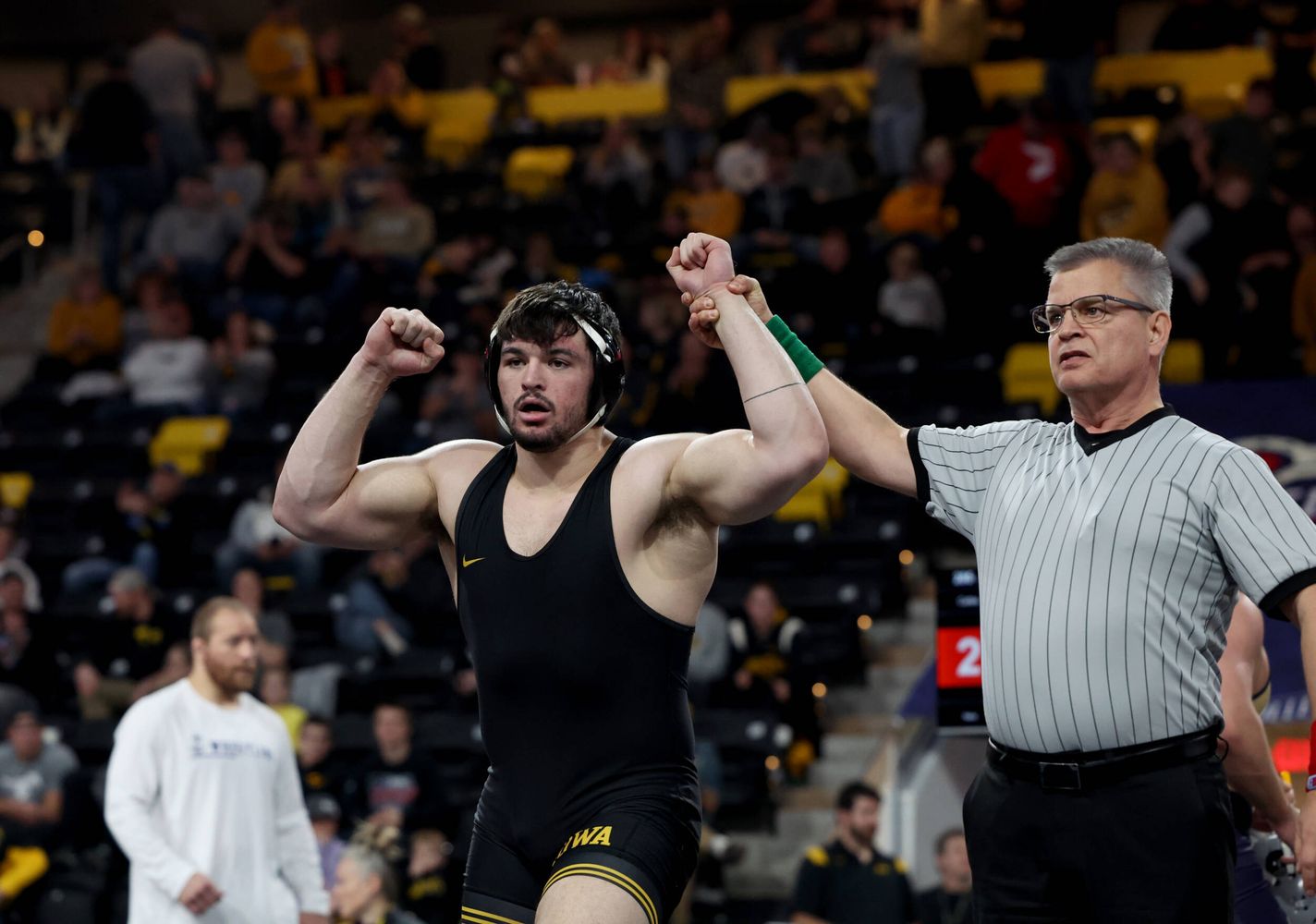 B1G OPENERS
The Hawkeyes have won their last eight Big Ten Conference openers dating back to the 2013-14 season — a 24-12 loss against No. 1 Penn State.

CASS’ CAREER HIGH
Senior Tony Cassioppi pinned his way to the 285 pound title at Soldier Salute. In his four falls, the Illinois native was on the mat for a grand total of 7:38.
• Cassioppi has five consecutive falls (his second streak of four-plus falls this season.) It is the first time in his career he has recorded a fall in five consecutive matches.
• This season, Cassioppi has nine falls — all in the first period — in his 11 matches. The nine falls are a career-high, moving his career total to 24 pins. Cassioppi’s nine falls are the most by a Hawkeye since Alex Marinelli in 2018-19.
• The last Hawkeye to have 10 or more falls? Michael Kemerer and Sam Stoll during the 2017-18 season.
• Two of Cassioppi’s 11 wins came against ranked foes when he downed Penn’s 15th-ranked Ben Goldin, 9-0, on Nov. 26 before beating Iowa State’s Sam Schuyler, 9-2, to clinch Iowa’s 18th straight victory over the Cyclones.
• In 11 matches, Cassioppi has been on the mat for a grand total of 27:33.
• Cassioppi is riding a 12-match winning streak dating back to last season. It is tied for the second longest streak of his career (15 wins in 2019-20 as redshirt freshman).

REAL DEAL
Senior Real Woods cruised to the 141 pound title at Soldier Salute, winning his four matches by two technical falls, a major decision and finals fall.
• Woods is 6-0 this season with bonus points in five of his six matches. He has 48 career victories (to eight defeats) with 42 wins coming at Stanford.

SIEBRECHT CONTINUES TO IMPRESS
Junior Cobe Siebrecht is 6-0 this season, posting bonus point victories in five of his six matches. He has two pins and three major decisions.
• Siebrecht is ranked in all three polls, coming in as high as No. 15 by Amateur Wrestling News at 157 pounds.
• Siebrecht had a six-point move in the first period en route to a 10-2 major decision over Iowa State’s Jason Kraisser. The Lisbon, Iowa, native pinned Penn’s 10th-ranked Anthony Artalona on Nov. 26 to record the highest ranked win of his career.
• Siebrecht has two victories over ranked opponents amongst his six wins this season.

MAD MAX
Senior Max Murin has already matched a career-high for bonus point victories. During his 10-1 start to the 2022-23 season, Murin has posted seven bonus point victories — two majors, three techs and two falls.
• Murin had one career technical fall prior to this season.
• Murin cruised to the Soldier Salute title at 149 pounds with two pins, a tech fall and two decisions. He downed teammates Joel Jesuroga and Caleb Rathjen in consecutive decisions to win the crown.

PK PUTS ON A SHOW
• Sophomore Patrick Kennedy has scored 140 points — 14.0 points per match — in his 10 matches this season. The Minnesota native is 9-1 with three technical falls, two pins and two majors this season. 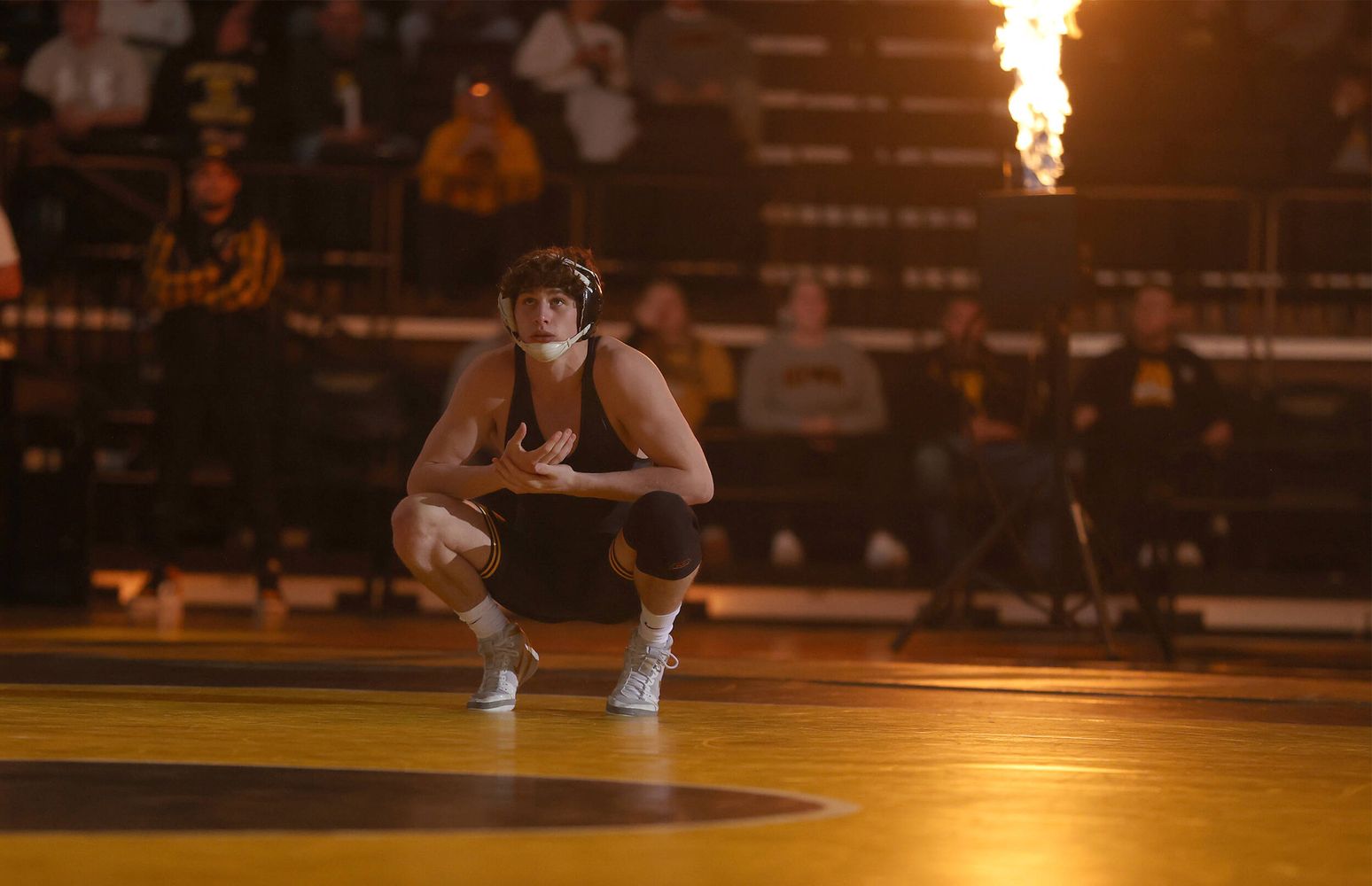 TRUE FRESHMEN IN VARSITY LINEUP
Three true freshman have competed in the varsity lineup this season. Drake Rhodes won his Hawkeye debut against California Baptist at 174 pounds, while Carson Martinson competed at 174 at Army and Joel Jesuroga at 149 at Chattanooga.

UP NEXT
The Hawkeyes return home on Jan. 13, hosting Northwestern at 8 p.m. (CT) in Carver-Hawkeye Arena. The meet will be All-American Day.