WEST LAFAYETTE, Ind. – The second-ranked University of Iowa men’s wrestling team won eight of 10 matches in a 37-6 rout of Purdue on Sunday afternoon at Holloway Gymnasium. The Hawkeyes have won 12 straight duals dating back to last season.

Iowa posted six bonus point victories in the dual to improve to 9-0 overall and 2-0 in Big Ten action.

“It’s on to Northwestern,” said head coach Tom Brands. “We have to be healthy and put our best team on the mat.”

No. 1 Spencer Lee opened the dual with his third consecutive fall, pinning No. 9 Matt Ramos in 2:54. Ramos notched the early takedown and led 8-1 midway through the first period. Lee responded with a takedown and six points in tilts to tie the match before finishing off the fall in 2:54.

It was Lee’s 45th consecutive win, moving him to 7-0 this season – all bonus point victories.

“Anything can happen in wrestling, the guy was game, went out took me down and threw me,” said Lee. “He took it to me a little bit, but the thing is you have to keep wrestling. The next score, next point. If you don’t get pinned in that throw, you have to get off your back and belly and keep scoring.

“That’s what wrestling is about. It is a never quit sport and never quit attitude.”

Junior Brody Teske returned to the lineup at 133 for his first match since November and he delivered a 16-4 major decision over Dustin Norris. Teske had four-point tilts in the first and second periods and got a late takedown to improve to 2-0 this season.

After Cullan Schreiver went up a weight class and dropped a 6-2 decision to No. 16 Parker Filius at 141, senior Max Murin was dominating at 149. The Pennsylvania native had 10 takedowns in a 22-7 technical fall victory over Trey Kruse. It is Murin’s fourth tech fall of the season and ninth bonus point victory in 12 matches.

Purdue notched its second win at 157 when No. 3 Kendall Coleman edged redshirt freshman Caleb Rathjen, 3-2, before the Hawkeyes closed out the dual with five straight wins. 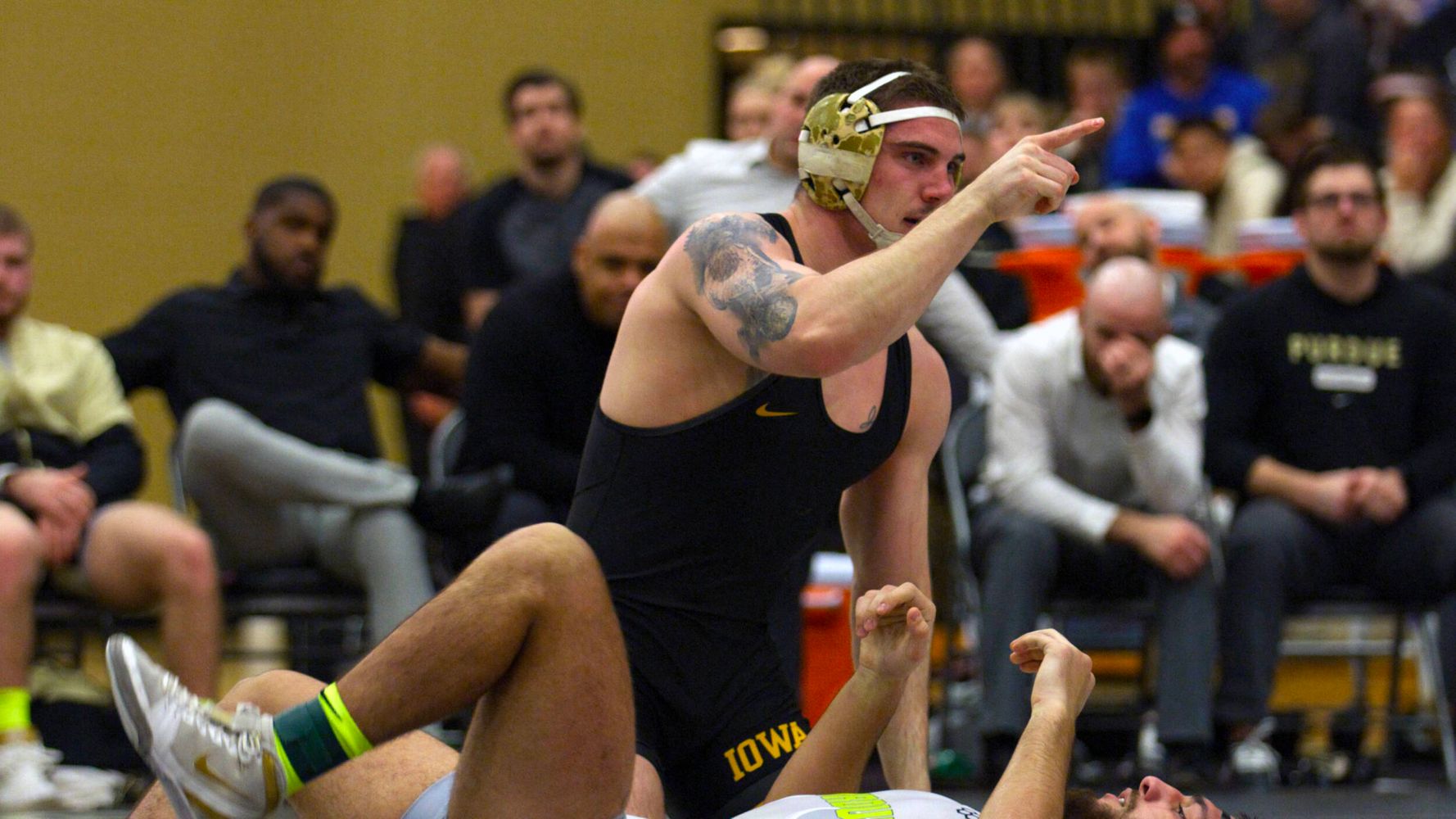 True freshman Aiden Riggins posted a 9-4 win over Stoney Buell at 165 in his first career dual and No. 16 Nelson Brands accumulated 3:15 of riding time in a 5-0 decision over Cooper Noehre at 174.

Junior Abe Assad followed with a fall in 4:15 over Ben Vanadia at 184 – his second of the season – and senior Jacob Warner posted a 16-4 major decision over Hayden Filipovich at 197.

“My spiral ride was there, I hit that,” said Assad. “I wasn’t forcing it a lot, hit him with it and sucked him back. I readjusted there, caught his arm and settled in for the fall. It’s stuff I work on a lot in practice, so it’s nice to see it work out on the mat.”

Senior Tony Cassioppi received a forfeit in the final bout to make the final dual score 37-6. Cassioppi is 13-0 with 12 bonus point victories this season.

OF NOTE…
– The Hawkeyes have won 34 consecutive duals over Purdue.
– Freshman Aiden Riggins is the fourth Hawkeye freshman to appear in a varsity dual lineup this season. (Drake Rhodes, Carson Martinson, Joel Jesuroga).

UP NEXT
The Hawkeyes return to Carver-Hawkeye Arena to host Northwestern on Jan. 13 at 8 p.m. (CT). The dual will be televised on ESPNU.