ON THE MAT
The second-ranked University of Iowa wrestling team travels to Happy Valley for a Friday dual against top-ranked Penn State. The meet will be held at the Bryce Jordan Center beginning at 7:30 p.m. (CT).
• The Hawkeyes will also send wrestlers to the Pat “Flash” Flanagan Open in Dubuque, Iowa, on Jan. 28. The competition will be held at the Graber Sports Center beginning at 9 a.m.

FOLLOW ALONG LIVE
• Friday’s dual will be televised live on BTN with Shane Sparks (play-by-play) and Jim Gibbons (color) on the call.
• Iowa wrestling events are broadcast by AM-800 KXIC and streamed on hawkeyesports.com via YouTube. Steven Grace and Mark Ironside will call the action for Hawkeye Sports Properties, a property of Learfield.
• Follow Iowa wrestling on social media via Twitter (@Hawks_Wrestling), Facebook/iowahawkeyewrestling and Instagram (@iowahawkeyewrestling).
• Live results will be available via TrackWrestling with a link available on hawkeyesports.com.

BACK POINTS
• The Hawkeyes have won 15 consecutive duals dating back to the 2021-22 season.
• Iowa is making its first trip to Happy Valley since the 2017-18 season.
• Friday’s dual features 19 ranked wrestlers.
• Senior Tony Cassioppi is 16-0 this season with a career-high 10 falls. The 10 falls are the most by a Hawkeye since 2017-18 (Sam Stoll/Michael Kemerer).
• Senior Spencer Lee is riding a 48-match winning streak dating back to the 2019 season — the ninth-longest streak in program history. Lee has six consecutive falls (four straight over top 10 opponents) — a career-long streak.
• Lee was named the NCAA and Big Ten Wrestler of the Week on Jan. 24 after recording back-to-back falls over top-five foes.

No. 2 Iowa Hawkeyes Probable Lineup at No. 1 Penn State 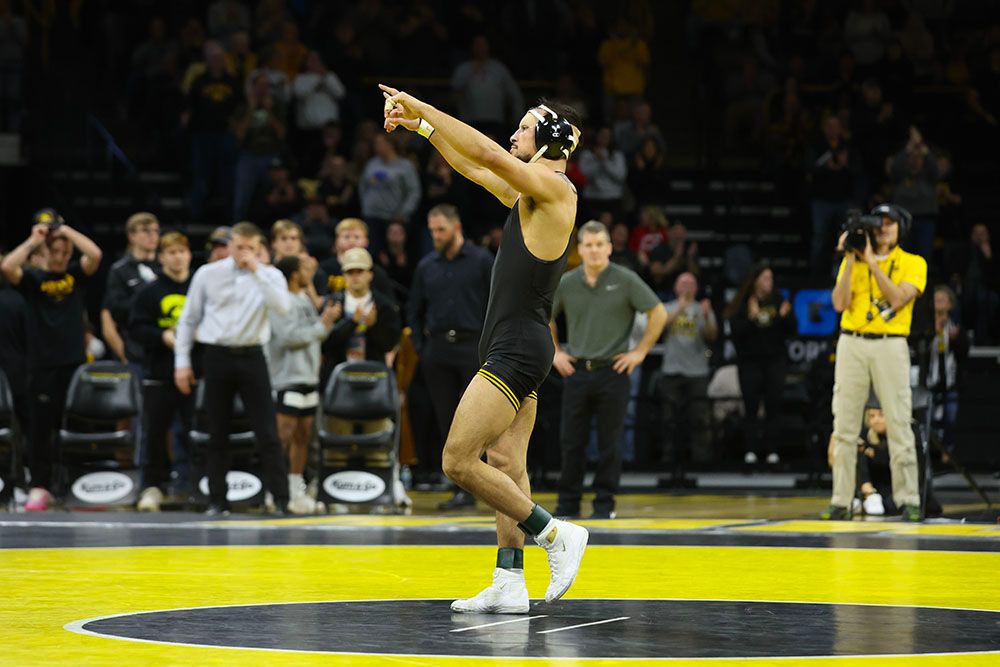 LAST MEET
Iowa defeated No. 16 Wisconsin, 19-18 on the third criteria, on Jan. 22 in Madison. The Hawkeyes won five matches in the dual, highlighted by Spencer Lee’s fall over No. 6 Eric Barnett. Iowa trailed 18-15 before No. 3 Tony Cassioppi posted a 4-1 decision over No. 11 Trent Hilger to tie the dual at 18. The Hawkeyes won the dual based on a 31-24 advantage in match points in the decisions, major decision and technical falls.

THE SERIES — PENN STATE
Iowa leads the all-time series 28-11-2. The Hawkeyes are 12-5-1 all-time in University Park This is Iowa’s first trip to Happy Valley since the 2017-18 season.
• Penn State won the most recent meeting, winning 19-13 last season in Iowa City.

1 VS. 2
Friday is just the fourth time Iowa and Penn State are meeting as No. 1 and No. 2 in the NWCA Coaches’ Poll.

RETURN TRIP TO PA
Iowa’s probable lineup includes two Pennsylvania natives in Spencer Lee and Max Murin and a third-Hawkeye — Kolby Franklin — hails from the state.
• Lee was a three-time Pennsylvania State champion (and runner-up as a senior) at Franklin Regional High School. Murin was a two-time state champion and three-time finalist at for Central Cambria in Ebensburg.

TESKE IN HAPPY VALLEY
Junior Brody Teske began his career in Happy Valley, competing for the Nittany Lions from 2018-20. The Iowa native redshirted during his first season, posting a 6-2 record unattached, before going 5-2 in 2019, competing during the first semester.

LEE NAMED NCAA, B1G WRESTLER OF THE WEEK
Spencer Lee was named the NCAA and Big Ten Wrestler of the Week on Jan. 24 after pinning a pair of top-10 opponents in dual wins over No. 11 Nebraska and No. 16 Wisconsin. Lee stuck No. 7 Liam Cronin in 38 seconds and No. 6 Eric Barnett in 4:38 for his fifth and sixth consecutive falls.

48 STRAIGHT
Senior Spencer Lee ran his fall streak to a career-long six matches, pinning No. 7 Liam Cronin of Nebraska and No. 6 Eric Barnett of Wisconsin last weekend. In Lee’s last four matches, he has pinned four consecutive top 10 ranked foes (No. 9 Matt Ramos, No. 3 Michael DeAugustino, Cronin and Barnett).
• Lee’s pin over Cronin came in just 38 seconds — tied for the third-fastest fall of his collegiate career. It was Lee’s 10th career fall in under one minute and it was his 27th first-period fall.
• The Pennsylvania native is 10-0 with 10 bonus point victories — seven falls (in a combined 13:31), two majors and one technical fall. In 10 matches, Lee is outscoring his opponents, 104-23, and has been on the mat for 31:79.
• The Pennsylvania native has won 48 consecutive matches dating back to the 2019 season, where he has outscored his opposition, 567-64. It is the ninth longest winning streak in Iowa wresting history: Jim Zalesky (89), Troy Steiner (74), Tom Brands (69), Brent Metcalf (69), Mark Ironside (67), T.J. Williams (67), Lincoln McIlravy (56) and Joe Williams (53).
• Lee is 88-5 in his collegiate career with 76 bonus point victories — 33 pins, 29 technical falls and 14 majors (86.4 percent).

CASS’ CAREER HIGH
Senior Tony Cassioppi has a career-high 10 falls (in 19:73) this season — tied for the third most in the NCAA. Nine of Cassioppi’s 10 pins have come in the first period. He is the first Hawkeye since Sam Stoll and Michael Kemerer in 2017-18 to have 10 falls in a single season.
• The Illinois native recorded pin No. 10 in Iowa’s 34-6 win over Nebraska when he stuck Cale Davidson in 6:39. Cassioppi nearly won via a stall out early in the match before building a 16-2 lead with riding time secured for a tech fall. He cut the Husker with 30 seconds left before taking him down feet to back to complete the fall.
• Cassioppi is 4-0 against ranked foes this season with victories over Penn’s No. 24 Ben Goldin (MD, 9-0), Iowa State’s No. 9 Sam Schuyler (9-2), Northwestern’s No. 4 Lucas Davison (3-2) and Wisconsin’s No. 11 Trent Hilger (4-1).
• Cassioppi has taken the mat three times with the dual in the balance. He responded with a win against Iowa State, a stall out against Illinois’ Matt Wroblewski and a decision over Hilger, 4-1, to tie the dual (and Iowa won via criteria).
• Cassioppi had five consecutive falls for the first time in his career with a fall over Chattanooga’s Logan Andrew before pinning his way through the Soldier Salute with four first period falls where he was on the mat for a grand total of 7:38.
• In 16 matches, Cassioppi has been on the mat for a grand total of 53:69.
• Cassioppi is riding a 17-match winning streak dating back to last season. It is the longest streak of his collegiate career.

MAD MAX
Senior Max Murin has a career-high 10 bonus point victories in his 13-3 start to the 2022-23 season. He has a career-high four pins and four technical falls to go along with two major decisions. (Murin had one career technical fall prior to this season.)
• All three of Murin’s losses have come against top 10 ranked opponents — Iowa State’s No. 8 Paniro Johnson (3-1, SV1), Northwestern’s No. 5 Yahya Thomas (3-2) and Wisconsin’s No. 2 Austin Gomez (5-2).
• In December, Murin cruised to the Soldier Salute title at 149 pounds with two pins, a technical fall and two decisions. He downed teammates Joel Jesuroga and Caleb Rathjen in consecutive decisions to win the crown.

COBE AT 157
Junior Cobe Siebrecht is 8-2 this season, posting bonus point victories in five matches with two pins and three major decisions. The Lisbon native won his first six matches of the 2022-23 season.
• Siebrecht notched the highest ranked victory of his career when he defeated No. 9 Trevor Chumbley of Northwestern, 6-3, on Jan. 13.
• Siebrecht is 4-1 against ranked foes this season with two top 10 victories – Penn’s No. 10 Anthony Artalona (Fall – 4:02) and Chumbley.

PK PUTS ON A SHOW
• Sophomore Patrick Kennedy has scored 174 points — 12.4 points per match — in his 14 matches this season. The Minnesota native is 12-2 with three technical falls, four majors and two falls this season.
• Kennedy is 3-2 against ranked opponents, including posting a 15-4 major decision over Illinois’ No. 11 Danny Braunagel on Jan. 6 in Iowa City. His two defeats came against Iowa State’s No. 3 David Carr (10-4) and Wisconsin’s No. 6 Dean Hamiti (4-3).

BONUS ABE
Junior Abe Assad has tallied a bonus point victory in half of his 14 victories this season. The Illinois native has four majors, two falls and one technical fall.
• Assad is 4-1 against ranked opponents, including a 6-5 win over No. 13 Lenny Pinto of Nebraska. It was Assad’s 50th career victory.

BT AT 133
Junior Brody Teske competed in back-to-back duals for the first time this season against Nebraska and Wisconsin, notching a pair of decisions. His 4-0 win over No. 28 Taylor LaMont of Wisconsin was his first ranked win of the season.

HAWKEYE HONOREES
• Junior Cobe Siebrecht was named the Big Ten Wrestler of the Week on Nov. 30 after defeating the highest ranked opponent of his career, pinning No. 10 Anthony Artalona of Penn to cap the Hawkeyes’ 26-11 dual victory on Nov. 26. Siebrecht got caught in a headlock early in the second period before rolling through and sticking Artalona in 4:02. It was his second pin and fourth bonus point victory of the season.
• Spencer Lee was named the Big Ten Co-Wrestler of the Week on Jan. 11 — his fifth career honor. He earned the distinction after going 2-0 with two first-period falls in wins over Illinois’ Maximo Renteria and Purdue’s ninth-ranked Matt Ramos. Lee fought back from an 8-1 deficit to pin Ramos in 2:54 for his fourth fall of the season.

TRUE FRESHMEN IN VARSITY LINEUP
Five true freshman have competed in the varsity dual lineup this season. Drake Rhodes won his Hawkeye debut against California Baptist at 174 pounds, Carson Martinson competed at 174 at Army and Joel Jesuroga at 149 at Chattanooga. Aiden Riggins won his varsity dual debut, downing Purdue’s Stoney Buell, 9-4, on Jan. 8.
• Iowa had two freshmen in the varsity lineup at No. 16 Wisconsin — a first for the Hawkeyes under head coach Tom Brands. Rhodes competed at 174, while Kolby Franklin made his varsity dual debut at 197.

UP NEXT
The Hawkeyes open the month of February on the road in Minneapolis, facing Minnesota on Feb. 3 at 8 p.m. (CT).