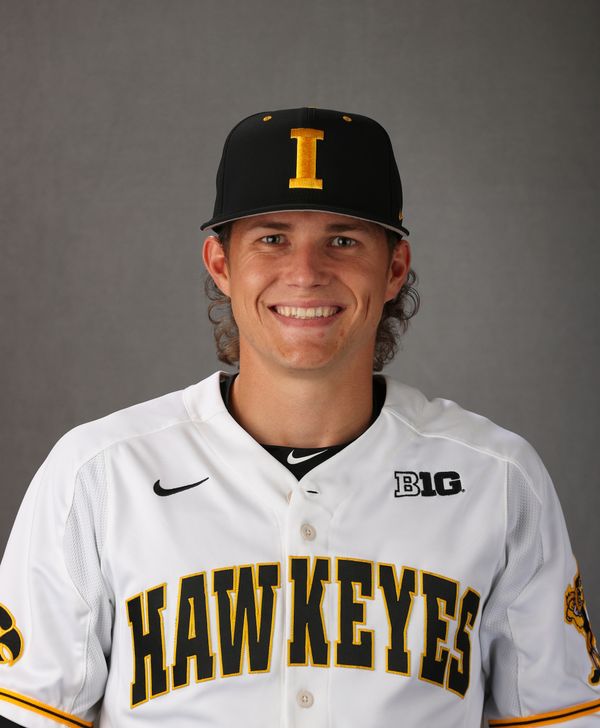 2022 Honors — Signed as undrafted free agent with Chicago White Sox… Rawlings Gold Glove recipient… top defensive pitcher in Division I college baseball…. second Hawkeye all-time to earn a Gold Glove… ABCA/Rawlings Second-Team All-Midwest Region honoree… second-team All-Big Ten selection… Academic All-Big Ten selection. 2022 — Went 3-0 with a 1.47 ERA in 29 appearances — the most on the team… with four saves… had 41 strikeouts to six walks over 30 2/3 innings… allowed 22 hits and had nine pickoffs… made multiple weekend appearances 10 times this season… had four saves in Big Ten play, which were third in the league… 1.47 ERA is the top-best in a single season in program history… made three Big Ten Tournament appearances, allowing one run on five hits over 3 2/3 innings… scattered three hits over two shutout innings in the series finale against Indiana (5/21) to record his fourth save… appeared in all three games in the series win at Michigan State (5/13-15), logging 4 2/3 innings… pitched two perfect innings in game one, earned his third win, tossing 1 2/3 innings in game two and struck out a pair of batters in the series finale… earned his third save, getting the final out of the series-opening win over Purdue (5/6)… notched his second save, getting the final three outs in extra innings in the series-clinching win at Nebraska (5/1)… tallied his second win, tossing 2 1/3 innings of shutout relief, fanning four (tying a career-high) and only allowing one hit in game two against Minnesota (4/16)… earned his first win as a Hawkeye, tossing 1 1/3 perfect innings with two strikeouts against St. Thomas (3/21)… made two appearances at UC Irvine (3/11-13)… tossed two innings of one-hit ball and had a career-best four strikeouts against Loras College (3/1)… made his season debut against Texas A&M Corpus Christi, fanning both batters he faced.

High School — Graduated from Assumption High School after spending his first three years in high school at Davenport North High School… earned three letters at Davenport… went 8-0 on the mound as a senior… posted a 0.64 ERA in 54 2/3 innings pitched as a senior… struck out 14 batters and allowed just one base runner in the 2017 state semifinal game… named all-conference as a sophomore and junior… also picked up all-district honors as a junior… selected to Quad-City Times All-Metro Team as a junior… as a junior, struck out 54 batters over 46 innings, while posting a 1.37 ERA and holding batters to a .157 batting average… his sophomore season, registered 36 strikeouts in 26 1/3 innings, and held batters to a .143 batting average… finished his sophomore season with a 1.86 ERA.

Personal — Born Sept. 2, 1999… son of John and Terri Beutel… has one older brother, Bryan, and one youngster sister, Amanda… brother played baseball at St. Ambrose University… graduated with a degree in sport and recreation management in May, 2021.