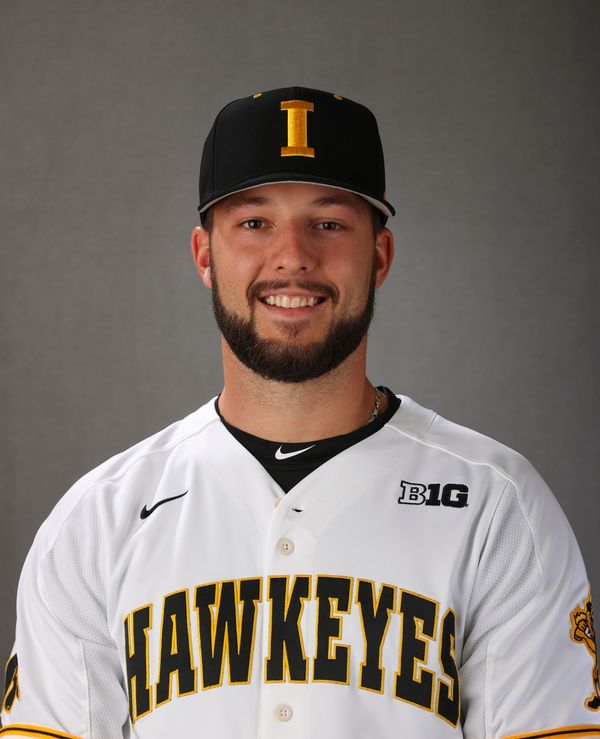 2022 — Team captain… went 1-0 with a 5.57 ERA in 13 appearances, including three starts… had 22 strikeouts over 21 innings… notched his first win of the season, allowing two runs on five hits and striking out five against Michigan (5/28) in the Big Ten Tournament… recorded his first career save — a three-inning save — allowing one hit and striking out two at Michigan State (5/14)… made his first start of the season against Texas A&M (3/5) at the Frisco Classic… tossed two shutout innings, punching out five in season debut against Air Force (2/18).

2021 — Iowa’s No. 3 starter… went 5-5 with a 4.19 ERA in 12 starts (13 appearances)… had 56 strikeouts to 14 walks… allowed one run or fewer in five starts this season… recorded six quality starts on the season… picked up his fifth win, allowing three runs on 11 hits over six innings at Michigan State (5/30)… had four strikeouts to one walk… logged seven innings, allowing three runs on four hits in a no-decision at Northwestern (5/22)… pitched a career-high 7 1/3 innings against Penn State (5/8), tallying seven strikeouts without issuing a walk… notched his third straight win, allowing two runs on five hits over six innings in a 15-4 victory over Northwestern (4/25)… recorded his second straight win — third of the season — allowing one run on three hits and fanning four over seven innings at Rutgers (4/17)… didn’t allow a run until the seventh inning… notched his second win, scattering two hits and fanning five over five shutout innings in the combined shutout win over Minnesota (4/11)… pitched five innings of one-run ball, scattering five hits, at Purdue (4/4) in the no-decision… earned his first win in his career-best start… logged a career-high seven innings, allowing one run on three hits with five strikeouts at Ohio State (3/27)… tossed 3 1/3 innings against Nebraska (3/21), allowing one hit and one unearned run… allowed two runs (one earned) on four hits over four innings against Ohio State (3/13)… had five strikeouts and one walk.

2018 Honors — Named to the Dean’s List for the fall semester. 2018 — Went 1-1 with a 7.20 ERA in 18 appearances, spanning 15 innings… logged a career-long two innings in relief at Northwestern (5/13), allowing three runs on three hits… earned his first career victory, tossing one perfect inning in relief in a midweek victory over Grand View (4/4)… made his Iowa debut against Old Dominion (2/18), allowing two hits in 1/3 of an inning.

High School — Ranked as the 398th-best prospect nationally by Perfect Game and 134th-best prospect in the country by Prep Baseball Report… 2017 Rawlings-Perfect Game honorable-mention All-American… PG Central Region first team… 2015 and 2016 PG underclass high honorable mention… four-time all-state selection, earning first-team honors by the IHSBCA as a senior, second-team honors as a freshman, junior, and senior, and third-team as a sophomore… three-time Southeast Conference Player of the Year (2015, 2016, 2017)… two-time Golden Triangle Newspaper Player of the Year (2016, 2017)… four-time first-team all-conference and all-district honoree… won 22 games and struck out a school-record 344 batters in career… tossed a no-hitter as a freshman… went 4-2 with a 2.18 ERA with 78 strikeouts in 41 2/3 innings as a senior, went 4-1 with a 1.28 ERA as a junior with 79 strikeouts over 43 2/3 innings, went 4-3 with a 1.18 ERA as a sophomore with 83 strikeouts in 47 1/3 innings, 5-1 with a 2.20 ERA with 71 strikeouts in 41 1/3 innings as a freshman, and 5-0 with a 0.28 ERA with 34 strikeouts in 25 innings as an eighth grader… helped team win four straight conference titles… played in the Iowa Senior All-Star Series… played AAU baseball for Diamond Dream Longhorns… four-year starter in football as team’s quarterback, where he was a three-time first-team all-district selection… rushed for more than 1,000 yards as a senior and was a second-team all-state punter… member of the Honor Roll as a freshman and senior… high school coach was Josh Allison.