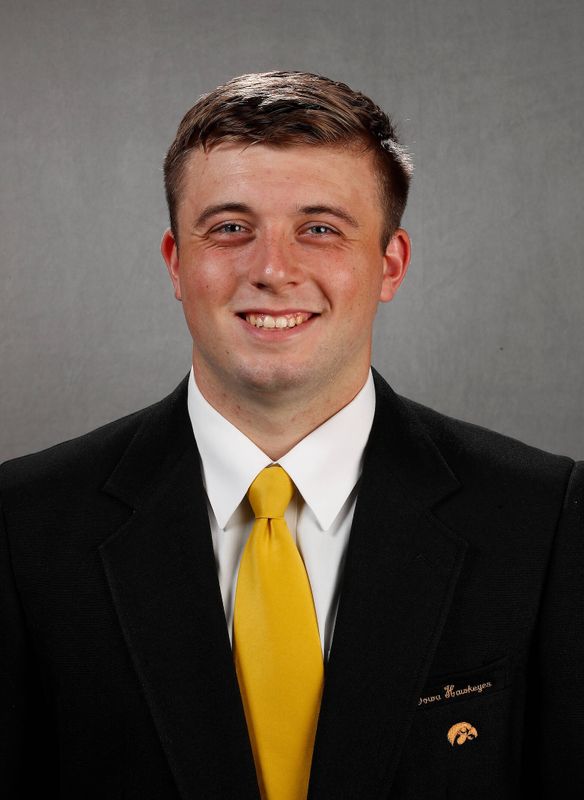 Hawk Item — Selected in the 15th round of the 2019 MLB First-Year Player Draft by the Houston Astros… was the 466th pick… finished his career fifth in program history in strikeouts (203).

2019 Honors — Academic All-Big Ten selection. 2019 — Iowa’s Friday night starter… one of four team captains… named to Big Ten Preseason Honors List… rated as the 13th-best draft prospect in the Big Ten Conference and the 335th-best prospect nationally by D1Baseball.com… went 6-3 with a 3.54 ERA in 15 starts… had 83 strikeouts over 89 innings… strikeout total ranks seventh in a single-season in school history, innings total is 16th… went 3-0 with a 3.28 ERA with 48 strikeouts in 49 1/3 innings in Big Ten play… had five games with seven or more strikeouts… tied for fifth in Big Ten in strikeouts looking (27), 11th in innings (89.0), and tied for 14th in strikeouts (83)… in league games, ranked in top-10 in three categories — tied for fifth in strikeouts looking (16), tied for seventh in innings (49.1), and tied for 10th in strikeouts (48)… tied a career-high, going eight innings, allowing one run on five hits and fanning nine in a victory over top-seeded and 21st-ranked Indiana (5/22) in the Big Ten Tournament opener… logged five innings, allowing three runs on seven hits with seven strikeouts in a no-decision against Michigan State (5/10)… tallied his third consecutive win, allowing two runs (one earned) on five hits over seven innings against UC Irvine (5/3)… notched his second straight win and fourth overall, pitching a career-high eight innings at Ohio State (4/26)… allowed two runs on six hits and fanned eight while issuing one walk… tallied his third win, allowing one run on four hits over six innings at Purdue (4/12)… notched tallied his second win, scattering seven hits and striking out eight over 6 1/3 innings against Rutgers (4/5)… notched his third quality start at Indiana (3/22), allowing two runs on six hits over seven innings… had a career-high 11 strikeouts… notched his first win and a quality start at Evansville (3/9), allowing one run on five hits over six innings, fanning five… posted his first quality start, allowing three runs (one earned) on three hits over six innings in a no-decision at No. 19 Oklahoma State (3/1).

2018 Honors — Academic All-Big Ten selection. 2018 — Went 3-2 with a 3.23 ERA in 11 starts… had 52 strikeouts in 55 2/3 innings… allowed two earned runs or fewer in eight of his 11 starts… went 2-0 with a 3.00 ERA in Big Ten play…  ERA ranked 13th and .196 batting average against is second-best in league games… missed two starts (Indiana, Nebraska) because of cancelled games and two starts (Oklahoma State, Northwestern) because of injury… ranked 12th in the Big Ten in ERA (3.23) and tied for 13th in strikeouts looking (19)… returned to the rotation May 18 against Penn State… allowed one hit over four shutout innings and fanned seven in an abbreviated 65-pitch start… topped out at 94 miles per hour in the start… left the game against Michigan (4/29) with elbow tightness, which forced him to miss his May 6 and May 13 starts against No. 12 Oklahoma State and Northwestern… recorded his third victory (and third straight quality start) at No. 25 Minnesota… allowed one run on four hits over seven innings… had seven strikeouts and two walks… notched his second straight quality start (third of the season), allowing one run on three hits over six innings in a no-decision against Ohio State (4/8)… had a career-high eight strikeouts… earned his first Big Ten victory, allowing two runs on five hits over 6 1/3 innings in the series-clinching win at No. 22 Illinois (4/1)… had a season-high six strikeouts, which tied a career-high… allowed one run on five hits over five innings and had four strikeouts to one walk in a loss at UAB (3/4)… notched his first career quality start and first victory of the season against New Orleans (2/25)… allowed two unearned runs over seven innings and scattered three hits… had four strikeouts to one walk… started game two of the season against Oakland (2/16).

at World University Games (2017) — Went 1-0 with a 0.00 ERA in two appearances (one start, one relief)… tossed a nine-inning no-hitter in victory over Czech Republic (8/25), finishing with seven strikeouts to three walks… it was Iowa’s first nine-inning no-hitter since 1965… faced two batters over the minimum and needed just 97 pitches.

2017 Honors — Academic All-Big Ten honoree. 2017 — Went 2-4 with a 6.96 ERA in 13 appearances, including 11 starts… had 39 strikeouts over 42 2/3 innings… started the second semifinal game at the Big Ten Tournament against Minnesota (5/27), allowed four runs on five hits over two innings… tossed a career-high 6 1/3 innings in a loss to Bucknell, allowing three runs on five hits with five strikeouts… notched a victory against Oral Roberts (3/4), allowing three runs on four hits over five innings… had four strikeouts… made his first career weekend start against Alabama State (2/25)… earned his first win of the season, allowing one run on two hits over three innings at South Florida (2/18)… struck out four without issuing a walk.

High School — Rated as a Top-500 prospect nationally by Perfect Game… Iowa Newspaper Association and Iowa High School Coaches Association first-team all-state honoree as a senior… second team all-state as a sophomore and third team all-state as a freshman… four-time first-team all-district and four-time all-conference selection, earning first team honors as a freshman, sophomore, and senior… recipient of the “Team Captain” Award as a junior and senior and the Coaches Appreciation Award as a junior… went 2-0 with a 0.39 ERA with 29 strikeouts in 18 innings as a junior before suffering an elbow injury… didn’t pitch as a senior, recovering from Tommy John surgery… went 10-2 with a 2.12 ERA with 94 strikeouts to 23 walks over 79 1/3 innings as a freshman… had a 10-3 record with a 0.98 ERA with 152 strikeouts to 26 walks over 85 1/3 innings as a sophomore… limited hitters to a .140 average… holds single season school records in wins (10), ERA (0.98), strikeouts (152), winning percentage (.889), shutouts (seven), batting average (.490) and steals (26)… helped team to a 2015 Northeast Iowa Conference title… played club ball for Perfect Game Select… also was an all-state and all-district defensive back in football, a four-year letterwinner and two-time all-conference selection in basketball and a conference and district champion and state placewinner in track and field… he was team captain of football, basketball, and baseball teams as a senior… National Honor Society… recipient of the Governor’s Scholar Award, Bernie Saggau Award, American Citizenship Award, and Academic Excellence Award (all four years)… was class president as a junior and vice president as senior… was a class officer all four years… high school coach was Cory McDonald… club coach was Steve James.