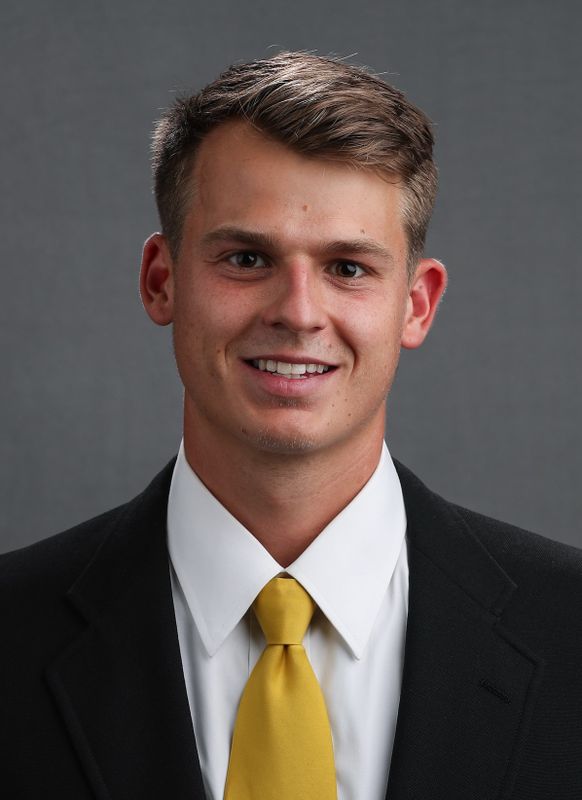 Hawk Item — Signed a free agent contract with the Oakland Athletics in June, 2020.

2020 Honors — Big Ten Pitcher of the Week on Feb. 25… Academic All-Big Ten selection… named to the Dean’s List for the fall semester. 2020 — Season canceled by Big Ten Conference and NCAA on March 12 due to concerns of coronavirus (COVID-19)… one of four team captains… Iowa’s No. 2 starter… went 2-0 with a 3.00 ERA in four starts with 24 strikeouts to five walks over 21 innings… allowed three or fewer runs in all four starts… ranked in top-15 in the Big Ten in two categories — tied for fifth in wins (2) and tied for 15th in innings (21.0)… named Big Ten Pitcher of the Week — the second honor of his career — on Feb. 25 after tossing six shutout innings, allowing two hits and fanning six in a win over No. 18 Arizona (2/22)… had a season-high seven strikeouts against Georgetown (3/7)… earned his first win, allowing two runs (both earned) on three hits and fanning six over five innings against Saint Joseph’s (2/15)… named to the Big Ten Preseason Honors List… rated as the 117th-best pitcher in Division I baseball by D1baseball.com with an 81.9 score… also tabbed as the 43rd-best Big Ten prospect for the 2020 MLB Draft.

2018 Honors — Academic All-Big Ten honoree. 2018 — Started nine games — six at first base and three at designated hitter… hit .167 with three RBIs and 11 walks… went 1-0 with a 4.12 ERA in 13 appearances, including one start… had 37 strikeouts over 39 1/3 innings… tossed 3 2/3 shutout innings against Ohio State (5/24), scattering three hits in the Big Ten Tournament… pitched a career-high five innings against Penn State (5/18)… allowed one run on two hits and had a career-high eight strikeouts… went 3 2/3 innings, scattering four hits and allowing two runs in the series finale against No. 12 Oklahoma State (5/6)… logged a career-long five innings in relief at No. 25 Minnesota (4/21), allowing one run on three hits and fanning three… had the game-winning RBI double in the eighth inning in Iowa’s 2-1 series-clinching victory over Ohio State (4/8)… also tossed three shutout innings in relief, scattering three hits and striking out three in game one against OSU (4/7)… tossed 4 1/3 innings in game two at Illinois, allowing two runs on four hits and punching out four… made his first start of the season against Loras College (3/21), allowing one hit and striking out three over four shutout innings.

at World University Games (2017) — Started five games — four at first base and one on the mound… had a pair of hits, drew four walks, and scored four runs… pitched three innings against Korea (8/26), allowing one run on three hits… finished with two strikeouts.

High School — Ranked as the No. 226-best player nationally by Perfect Game… 2016 Iowa Gatorade Player of the Year as a senior… IHSBCA Player of the Year as a senior… All-Iowa Baseball Player of the Year by the Des Moines Register as a junior and senior… elite-team all-state as a junior… three-time first-team all-state selection, second-team honoree as a sophomore… 2015 3A Player of the Year… 2015 Underclass High Honorable Mention by Perfect Game… three-time first-team all-conference selection… three-time team MVP… went 10-1 with a 0.64 ERA as a senior with 123 strikeouts… had an 11-1 record with a 0.56 ERA as a junior… struck out 112 in 74 innings and issued just 10 walks… hit .421 with six home runs, 39 runs, and 12 steals as a senior… hit .520 with 14 doubles, nine triples, and 13 home runs with 57 RBIs, 51 runs, and stole 15 bases… won 28 games and had 337 strikeouts as a high school pitcher… hit above .380 throughout high school… led team to two conference titles and to the Class 3A state semifinals in 2015 and 2016… played for Perfect Game Iowa Select for three years… also was an honorable mention all-conference selection in basketball, helping team to a third-place team finish… member of the National Honor Society… high school coach was Jesse Jablonski… club coach was Steve James.