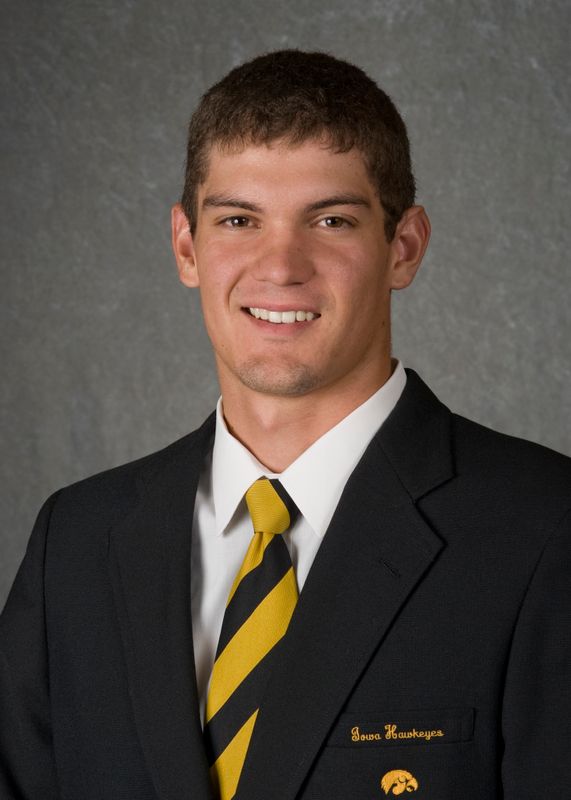 Hawk Item — Finished his career with 74 appearances, ranking fourth in school history… his 13 saves are seventh most in the Iowa record books.

2017 Honors — Big Ten All-Tournament team selection. 2017 — Went 5-1 with a 2.54 ERA in 29 appearances — tied for fourth-most in Big Ten… had 46 strikeouts in 46 innings… converted 8-of-10 save opportunities… the eight saves were tied for eighth in the Big Ten… made multiple weekend appearances in eight series this season… appeared in three games in three consecutive days at the Big Ten Tournament… earned his eighth save in NCAA Regional win over No. 15 Houston, allowing two hits in 2 2/3 innings and fanning four… Big Ten All-Tournament team selection after going 2-0 with a 0.00 ERA and one save in three appearances… earned his fourth win, tossing 1 2/3 scoreless innings against Maryland (5/25)… tallied his seventh save in the win over Nebraska (5/26), and logged a career-best 5 2/3 innings, allowing just two hits to lead team to Big Ten Tourney title game… got out of three bases loaded jams during the weekend… picked up his sixth save, tossing 1 2/3 innings in series opener at Illinois (5/18… earned his third victory on Senior Day in an 11-10 come-from-behind victory over Ohio State (5/14)… earned his second win, tossing two innings against Michigan State (5/5) in the series opener… allowed one run in two innings… picked up his fifth save, tossing two shutout innings in the series finale… tied a career-high by striking out five batters in two innings against Milwaukee (4/25)… notched his first win of the season, tossing 2 1/3 shutout innings and fanning three at Nebraska (4/14)… over four appearances and six innings from March 24-April 4, didn’t allow a hit or run and had nine strikeouts to one walk… tallied his third save, tossing a perfect ninth in the win over South Dakota State (4/4)… went two innings without allowing a hit against UNLV (3/31) to earn his second save… notched his first save, striking out a pair in 1 2/3 shutout innings against Northern Illinois (3/7).

2016 — Went 2-1 with a 2.41 ERA in 16 appearances… had 16 strikeouts in 18 2/3 innings… was second on the team with four saves, tied for the 12th most in the Big Ten… earned his second win, getting the final three outs in Iowa’s 5-4, come-from-behind victory over Ohio State in the Big Ten Tournament (5/27)… tallied his fourth save in Iowa’s game two victory over Michigan State (5/14)… earned his third save, getting a strikeout to close out the victory at Indiana (4/17)… got the final two outs to record his second save in Iowa’s 9-7 victory over Air Force (4/12)… earned his first save of the season, getting the final out in a 6-3 win at Minnesota (4/3)… notched his first victory of the season, tossing two shutout inning and striking out a pair against Northern Illinois (3/29)… threw two shutout innings in relief against Point University (3/14)… made his first appearance of the season at Southern Illinois (3/6), allowing one run on four hits over two innings.

2015 — Went 0-1 with a 3.44 ERA in 11 appearances (two starts)… allowed seven runs on 11 hits in 18 1/3 innings… had 11 strikeouts against 10 walks… didn’t allow a run in seven of 11 appearances… threw 2 2/3 innings of shutout ball in relief, scattering three hits and fanning one vs. Sacramento State (4/28)… made his first appearance since 2013 on March 1, throwing three scoreless innings against Cincinnati… had three strikeouts to one walk and allowed one hit.

2013 — Made 18 appearances (16 relief, two starts), the second-most appearances by a Hawkeye… one of seven true freshman to see playing time… allowed zero runs over 1 2/3 innings in two appearances at Purdue… finished last two games at Purdue, collecting the first save of his collegiate career May 18… pitched a season-high 4 1/3 innings May 12 vs. Michigan State, allowing one unearned run on two hits… suffered loss in second start against Nebraska Omaha on May 7, allowing five runs on five hits in 2 1/3 innings… threw a scoreless inning vs. Northern Illinois, working out of a bases loaded jam… held Minnesota scoreless for 1 2/3 innings April 26, allowing one hit… threw 3 2/3 innings April 13 vs. Kansas State… recorded career-high five strikeouts April 9 vs. Kansas… threw 2 2/3 innings against the Jayhawks, allowing one run on three hits… pitched final 2 1/3 innings against Western Illinois on April 2, allowing zero runs and one hit… threw 1 2/3 scoreless inning against Indiana on March 30, retiring six of the seven batters he faced… tossed two innings against Maine (March 8), allowing one hit and zero earned runs… also recorded three strikeouts… made first collegiate start March 3 against Wichita State, allowing four runs (three earned) in three innings…. made season and collegiate debut Feb. 16 against Austin Peay, pitching the ninth inning in a 13-1 win… needed just six pitches to post a scoreless inning, retiring the side in order.

High School — Four-time all-conference, four-time all-district and two-time all-state honoree, super-team selection… holds the record for single-season doubles and hits, and career doubles, hit, runs and batting average at Davis County High School… batted .387 as a freshman while finishing 8-0 with a 1.20 ERA and 88 strikeouts on the mound… hit .480 with five home runs and 37 RBIs while finishing with an 8-1 record on the bump as a sophomore… notched a 1.61 ERA with 104 strikeouts… hit .423 with 11 home runs and 41 RBIs as a junior while posting a 9-2 record on the mound… tallied a 1.12 ERA with 101 strikeouts… Hit .504 with three home runs 50 RBIs as a senior while posting a 13-0 record on the mound… had a .90 ERA with 112 strikeouts… led his team to four-straight conference titles, including a third-place finish at state in 2010 and 2012 and a state championship in 2011… four-year football letterwinner, earning third team all-state honors in 2010… earned three letters in basketball and was named all-conference in 2010… honor roll student each semester during high school… earned the Excellence in Academic Achievement Award from 2009-11.

Personal — Born Oct. 22, 1993… son of Mike and Susan Turner and Ron and Angeline Martsching… has two siblings, Jake and Jed… was a high school teammate of fellow Hawkeye Calvin Mathews… majoring in sports studies and sociology.